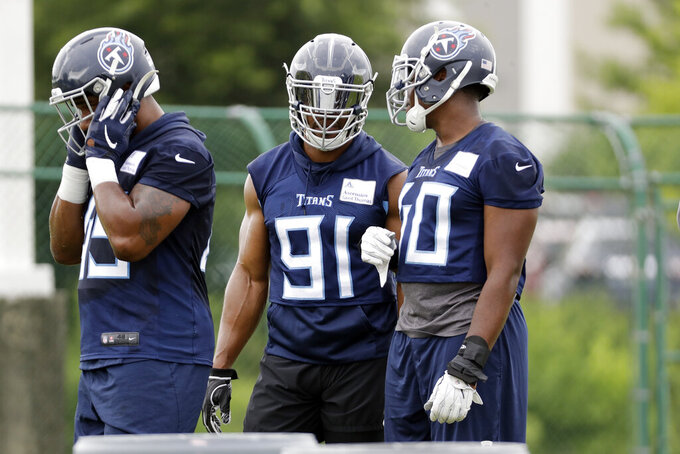 Tennessee Titans outside linebacker Cameron Wake (91) waits to run a drill during an organized team activity at the Titans' NFL football training facility Tuesday, June 4, 2019, in Nashville, Tenn. Fans have been wanting to know how Tennessee will get more sacks after the retirement of Brian Orakpo and the free agent signing of 37-year-old Cameron Wake. (AP Photo/Mark Humphrey)

The goal is part of the defense's anticipated overall improvement, but it's not the Titans' primary focus.

"We get so caught up sometimes in like, well, if a guy didn't have a lot of sacks that he must not be playing particularly well," Pees said. "Well, the team that led the league last year in sacks was also 31st on defense. Between me, I'd rather be eight on defense and midway in the sacks, just me personally. ... Guys who have a lot of sacks doesn't mean they're playing great defense. It means they got a lot of sacks."

Tennessee had 39 sacks in 2018, tying for 16th in the NFL. The Titans would like to be better in that category.

Nonetheless, Pees is more worried about the Titans doing what's asked of them within the defensive scheme, even if that means sacrificing sack numbers. Tennessee made a few personnel changes on a defense that ranked third in fewest points allowed, eighth in fewest yards allowed and sixth against the pass in 2018.

Brian Orakpo had 1½ sacks in his final season, and the Titans didn't bring back veteran linebacker Derrick Morgan, who managed only a half-sack. Tennessee's big offseason move came with the free agent signing of Cameron Wake who has 98 career sacks but turned 37 in January.

The Titans are also counting on some young players for an improved pass rush.

Jayon Brown, going into his third season, had a career-best six sacks last season, and Harold Landry III, expected to start opposite Wake, had 4½ sacks. Linebacker Rashaan Evans, the first-round pick out of Alabama last year, missed last preseason with an injury and still is looking for his first sack and might get more chances to rush quarterbacks this season.

Landry, a second-round pick out of Boston College last year, is up to 255 pounds after playing around 240 pounds at times as a rookie last season. He's worked to add strength and explosiveness with the Titans hiring his old BC strength coach Frank Piraino.

"I'm much more relaxed out there going into my second year," Landry said Tuesday. "I feel like last year was a big learning experience for me. I took it to the offseason. Now I take it to OTAs. I think the game speed has definitely slowed down for me. I'm much more relaxed and much more reactionary flying off the ball. Whatever happens, I just read and react."

As for Wake, Pees said the veteran is busy learning a new defense and what the Titans want from him as a linebacker and defensive end.

"They all have to improve," Pees said. "We want to obviously increase our numbers there, but as long as we're getting pressure on the quarterback and we're playing well on third down, that's the stuff that we're really looking for."

NOTES: Rookie WR A.J. Brown left Tuesday's session early after pulling up while working against defensive backs. The receiver was the Titans' second-round pick out of Ole Miss in April. ... The Titans have a new sand pit on the edge of their practice fields for players recovering from injuries and older players working on conditioning. Coach Mike Vrabel says he worked out with Joey Galloway a lot with both living in Columbus, Ohio, as they looked to push themselves as they became older players. "I noticed that my knees and my ankles probably got a little bit more sore than what they used to in training," Vrabel said. "So we worked and did most of our stuff in the sand pits as we began to get a little older. ... It's just another modality for our guys to train with and try to help us."