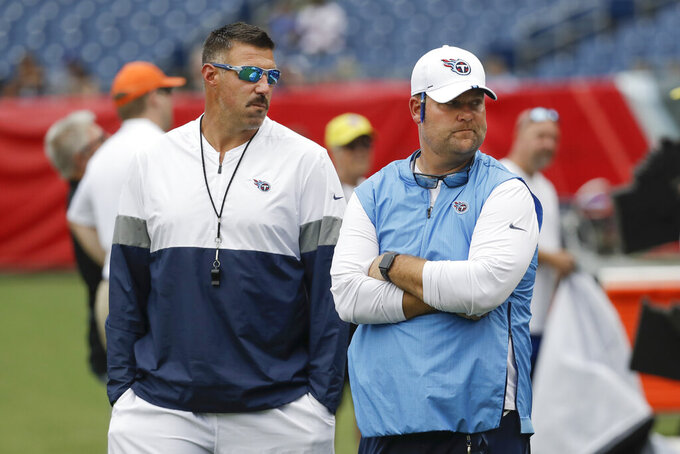 “I know their singular goal is to deliver a championship for our fans," Strunk said. “Together they have developed a culture within our organization that has been essential to our success. Their values align with mine and what I want the Titans to be.”

Strunk, who took over as controlling owner in March 2015, hired Robinson in January 2016 for a team that had just gone 5-27 combined over the previous two seasons. Robinson now has overseen six straight winning seasons, second only to Kansas City in the NFL.

The Titans hired Vrabel in January 2018 as a first-time head coach, and his 43 victories in his first four seasons match Jack Pardee's success. Vrabel led the Titans to the AFC championship game in January 2020 and back-to-back AFC South titles — the franchise's first since the then-Houston Oilers won three straight between 1960-62 in the AFL.

Tennessee just posted a 12-5 record and earned the AFC's No. 1 seed for the first time since 2008 despite using an NFL record 91 players. The Titans lost 19-16 to Cincinnati in the divisional round.

“They demand excellence from themselves and others, work well together, are always striving to improve and they care deeply for our players and staff,” Strunk said.

He drafted five Pro Bowlers, led by two-time All Pro safety Kevin Byard and the AP NFL 2020 Offensive Player of the Year in running back Derrick Henry. He signed two more in free agency in left guard Rodger Saffold and special teams player Brynden Trawick, and traded for running back DeMarco Murray and quarterback Ryan Tannehill.

The Titans also announced they have hired Tim Kelly as passing game coordinator and Bobby King as the new inside linebackers coach, both coaches Vrabel worked with in Houston.

Kelly, who spent the past eight seasons with the Texans, was offensive coordinator the past three seasons and also coached tight ends in 2017 and 2018.

King replaces Jim Haslett, and he reunites with Zach Cunningham. The Titans claimed the linebacker off waivers from Houston in December. King has coached 12 years in the NFL, the last four with Houston.