Titans get QB Ryan Tannehill back after 2 games vs Denver 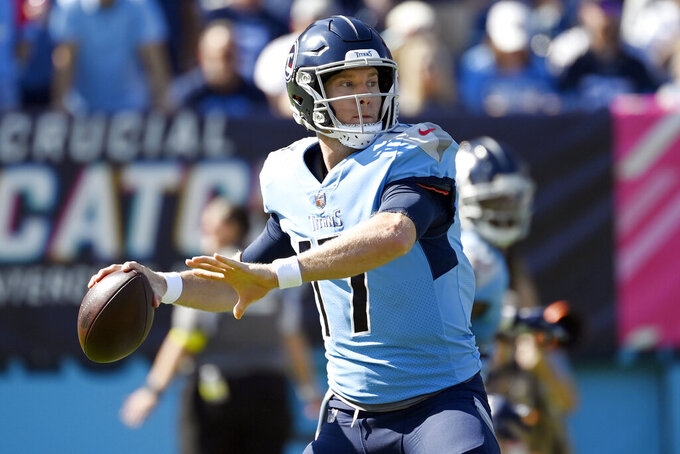 FILE - Tennessee Titans quarterback Ryan Tannehill throws during the first half of an NFL football game against the Indianapolis Colts Sunday, Oct. 23, 2022, in Nashville, Tenn. The Titans got their best signs of hope at reviving one of the NFL's worst passing offenses Wednesday, Nov. 9, 2022. Tannehill practiced during the portion open to media Wednesday for the first time since spraining his right ankle Oct. 23. (AP Photo/Mark Zaleski, File)

NASHVILLE, Tenn. (AP) — The Tennessee Titans will have quarterback Ryan Tannehill back against the Denver Broncos after the 11-year veteran missed the past two games with a sprained right ankle.

The Titans (5-3) will need the veteran with cornerback Kristian Fulton becoming the fifth Tennessee defensive starter declared out against Denver (3-5).

Tannehill sprained his right ankle Oct. 23 in a win over Indianapolis. Rookie Malik Willis replaced him and went 1-1 in Tannehill's absence. The Titans currently rank 31st in the NFL in yards passing per game with only 100 yards more passing than Tennessee has rushed for thanks to the league's rushing leader in Derrick Henry.

The Titans also have rookie wide receiver Treylon Burks back after he was activated Saturday off injured reserve along with cornerback Elijah Molden. The defensive back will be a big addition with Fulton scratched with an injured hamstring.

Fulton joins Jeffery Simmons, a 2021 Pro Bowl defensive lineman, outside linebacker Bud Dupree and safety Amani Hooker who all were declared out on Friday. Inside linebacker Zach Cunningham was placed on injured reserve Saturday along with defensive back Josh Thompson.

The Broncos, who rank 30th in the NFL in scoring, will be without wide receiver KJ Hamler. Denver also scratched safety Justin Simmons who hurt a knee in the Broncos' win in London over Jacksonville.