Titans have flexibility to add help at No. 19 in NFL draft 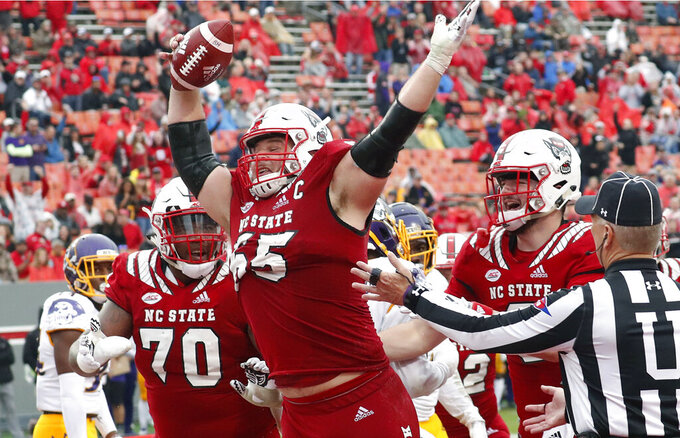 FILE - In this Dec. 1, 2018, file photo, North Carolina State's Garrett Bradbury (65) celebrates after he scored a touchdown during the second half of NCAA college football game, in Raleigh, N.C.Bradbury is a possible pick in the 2019 NFL Draft. (AP Photo/Chris Seward, File)

NASHVILLE, Tenn. (AP) — Music City and the NFL are throwing quite a party for the draft, and the Tennessee Titans will be a couple of miles away at team headquarters quietly biding their time until hitting the clock.

"We're going to have to sit and wait for a while till we're picking there at 19 — if we stay at 19," general manager Jon Robinson said.

The Titans hold the 19th pick overall after coming up a victory short of a second straight playoff berth in coach Mike Vrabel's debut season. They have six total draft picks a year after drafting only four players, and the general manager who has made 14 trades since being hired in January 2016 has shown he's willing to move. Robinson traded up in the first two rounds last year to take linebackers Rashaan Evans and Harold Landry III.

Now the Titans must decide how to help Marcus Mariota with the quarterback going into his fifth and final season under contract.

Mariota has yet to start all 16 games in any of his first four seasons, and the Titans made sure to upgrade their backup quarterback by trading with Miami for Ryan Tannehill. They also released Blaine Gabbert, who went 2-1 in Mariota's place last season with the one loss in the regular-season finale.

Perhaps adding a blocker such as North Carolina State center Garrett Bradbury would be wise on Day 1 of the draft.

Improving wherever possible is the goal after going 9-7 in three consecutive seasons with only one playoff berth.

Some things to know about the Titans:

Drafting another outside linebacker is a must even with Wake replacing Brian Orakpo, who retired a day after the season ended. The Titans traded up to No. 41 last year for Landry who is in position to start with veteran Derrick Morgan no longer under contract. Landry tied for third on the team with 4½ sacks starting three of his 15 games. Sharif Finch also should play more after the undrafted rookie had 1½ sacks, but more depth is a must for a defense that had 39 sacks last season.

The Titans remade the interior of the offensive line, letting left guard Quinton Spain leave as a free agent for Buffalo and cutting right guard Josh Kline after he declined to rework the three years left on his contract. Pamphile is expected to have a chance at right guard. Center Ben Jones is going into the final year of his contract, while the Titans have not announced yet whether they will pick up right tackle Jack Conklin's fifth-year option after injuries limited him to nine games last season.

Robinson made clear that Mariota is the Titans' starter with Tannehill brought in to push the younger quarterback. The Titans used their fourth and final draft pick last year at quarterback, though Luke Falk was waived in the final roster cuts. The Titans are determined to help Mariota grow after he set the franchise record completion rate at 68.2% percent last season. Keeping Mariota healthy is the first step after he was sacked a career-worst 42 times.

"We're excited that Marcus is our quarterback," Vrabel said. "I just think the durability of the player is critical. We only have so many guys. ... Being available is critical."

The Titans could use another tight end with veteran Delanie Walker coming off a broken ankle that ended his season in the opener, especially with Jonnu Smith winding up on injured reserve himself. Considering Humphries would have led the Titans with his 76 catches and five TD receptions last season, more help for a still-young receiving group remains an option.

Three of the Titans' picks come within the first 82 selections. They sent their sixth-round pick to Baltimore last September in a deal for linebacker Kamalei Correa and their seventh-round selection to Miami as part of a trade for Tannehill. Tennessee also netted the Dolphins' second pick in the sixth round.