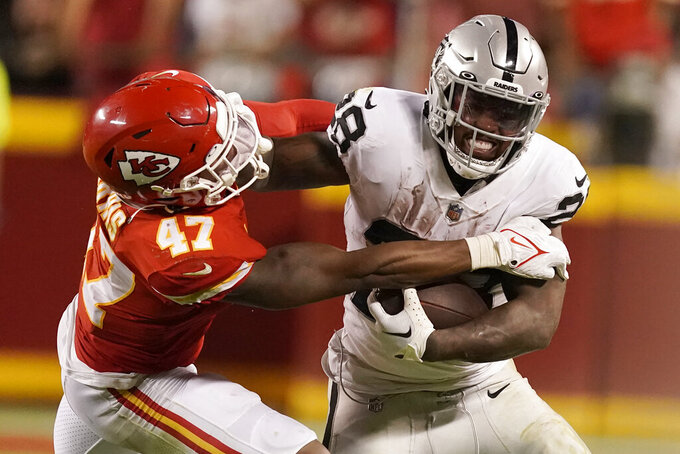 The picks this week are a combination of the usual scoring suspects and new entrants to the ranks of the most likely to cross the end zone in Week 7. These are the best bets to score at the WR and RB positions.

Henry has been on a tear as of late, scoring five TDs over his past four weeks, and his hot streak should continue in Week 7 versus a Colts team that stifles the pass, but is our eighth-best matchup for opposing RBs.

With the best TD odds (-275) in the league this week, Henry is likely to reach the end zone for his fifth straight game.

Jacobs has been quietly good this season, most of his fantasy points coming over his past two games in which he scored three times. This week he faces a Texans team that is our second-best matchup for opposing RBs, but Houston does a decent job of containing the pass. With 22.53% TD dependency and -200 odds to score, Jacobs is one of the best bets to score at the RB position in Week 7.

With Damien Harris possibly facing an extended absence because of a hamstring injury, Stevenson is slated to be the primary back for New England for a second consecutive week. No back has played more snaps (88%) over the past two weeks than Stevenson, who’s scored twice in the span, and his impressive -125 odds to score are indicative of his potential. Roll him out and rest easy.

Chase has been up and down this season, but he’s fresh off his best game yet (seven catches for 132 yards, two touchdowns), and he’s set to face an Atlanta secondary that’s our fourth-best matchup for opposing WRs going into Week 7. His -105 odds to score only embolden my assertion of Chase as my favorite candidate to score at the WR position this week.

Searching for his second TD of the season, Pittman has his best chance yet this week against the Titans, our second-best matchup for opposing WRs. Coming off a 16-target, 13-catch Week 6, Pittman is running hot entering Week 7, playing 99% of snaps over the past two games, the highest mark in the league. Based on the matchup and his constant presence on the field, Pittman is a prime pick to score a TD this week.

Lazard is tied for third in receiving TDs (four) among WRs, scoring in four of his past five games. His chances to find the end zone continue to be positive this week as he goes up against a Washington team that is our third-best matchup for opposing WRs going into Week 7. With strong odds to score, and playing 97% of snaps in Week 6, Lazard is a favorite to hit the end zone this week.