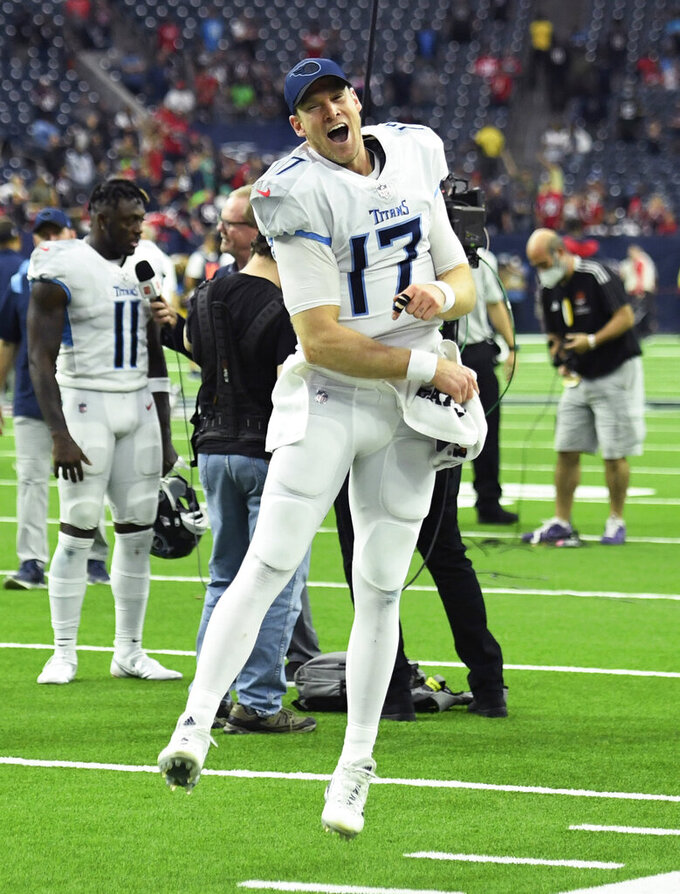 NASHVILLE, Tenn. (AP) — The Tennessee Titans have a chance to see if the third time is the charm.

The Titans (12-5) earned the AFC's No. 1 seed for the third time in franchise history — all since leaving Texas for Tennessee in 1997 and clinched beating the team that replaced them in Houston with a 28-25 win over the Texans.

The challenge for this franchise will be proving they can take advantage of the first-round bye not knowing their opponent yet for the divisional round. Home-field advantage throughout the AFC playoffs didn't help in their two previous tries.

Titans coach Mike Vrabel said Monday it's time to focus on themselves and what they need to do to try to keep winning.

Despite posting the NFL's best records in 2000 and 2008 at 13-3, the Titans lost in the divisional round to the Baltimore Ravens each time. Now the Titans won't see the Ravens who didn't make this postseason.

Another difference? The Titans are 8-0 under Vrabel when coming off a bye or extra rest from a Thursday night game. That's tied with Pittsburgh for the best mark in that category over the past four seasons.

These Titans need the first-round bye to rest up after using an NFL-high 91 players, most ever in a non-strike season. That also gives Derrick Henry, the 2020 AP NFL Offensive Player of the Year, more time to practice for an expected return for the divisional round.

Monday marked 10 weeks since Henry was placed on injured reserve with a broken right foot, and he started practicing with the Titans last week. Henry still finished the season ninth in the NFL in rushing after leading the league each of the past two seasons.

The passing game. Ryan Tannehill was sacked only once, and he completed passes to nine different Titans. Tannehill finished with a 138.9 passer rating and showed serious elusiveness escaping a would-be sack to complete a 37-yard pass on a game-winning TD drive. The Titans also had the best performances from receivers A.J. Brown and Julio Jones in the same game since the middle of October in a win over Buffalo.

Jones. The seven-time Pro Bowl wide receiver has been dismissed as a bust for a lackluster season where he finished with 31 catches for 434 yards. But Jones had a team-high five catches for 58 yards, and his first touchdown catch this season provided the winning margin for the Titans to clinch the No. 1 seed.

K Randy Bullock. The Titans strung together a 13-play drive late in the first quarter, and they turned to Bullock when they bogged down at the Houston 24. He missed a 42-yard field goal wide right. The Titans' third kicker finished the regular season 26 of 32 on field goals, but was just 8 of 14 between 40 and 49 yards.

The Titans only ruled out a pair of defensive linemen against Houston. Safety Amani Hooker left the game and returned. So did starting cornerback Kristian Fulton who hurt his left arm late and defensive back Elijah Molden.

One — The number of wins the Titans need to host their first AFC championship game. The Houston Oilers had to go to Pittsburgh for the conference games for the 1978 and 1979 seasons. The Titans won in Jacksonville in January 2000 to reach the franchise's lone Super Bowl. They lost in Oakland following the 2002 season and in Kansas City in January 2020.

Rest and heal up all the nagging injuries. Spend the bye week trying to clean up some issues and continue Henry's recovery.