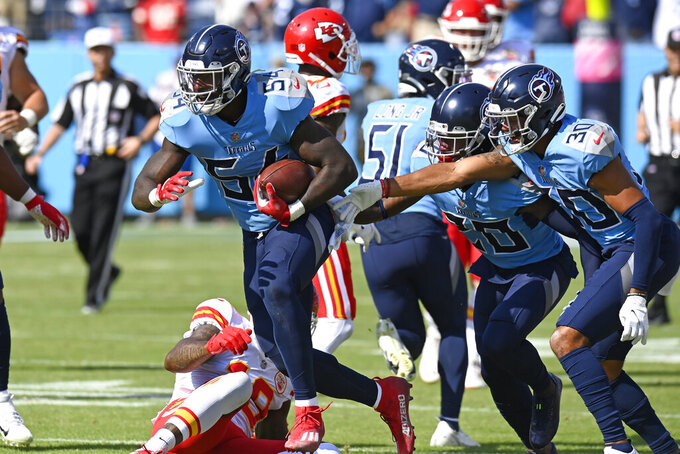 Tennessee Titans linebacker Rashaan Evans (54) celebrates after intercepting a pass against the Kansas City Chiefs in the first half of an NFL football game Sunday, Oct. 24, 2021, in Nashville, Tenn. (AP Photo/Mark Zaleski)

NASHVILLE, Tenn. (AP) — Swapping out a bunch of players for new ones combined with others playing better has made a world of difference for the Tennessee defense.

The Titans are coming off their best game this season. They forced three turnovers, had a season-high four sacks and held Chiefs quarterback Patrick Mahomes to a career-low 62.3 passer rating.

The improvement isn't a one-game wonder.

Led by outside linebacker Harold Landry, the Titans — who visit Indianapolis (3-4) on Sunday — rank 10th in the league with 17 sacks. That's two off their total for all of 2020, when they ranked 30th. They're also giving up fewer points.

“We're just playing with a lot of confidence, a lot of swagger,” safety Kevin Byard said Wednesday. “Guys are flying around having fun making plays.”

The Titans (5-2) also believe they can be better if they can quit giving up big plays and force more turnovers.

“All our games this year, the games we won, the games we have success on defense we didn’t give up the big play, made teams earn it,” Byard said. "I think we have to continue that philosophy and obviously continue to get turnovers.”

The Titans held Kansas City to just a field goal, the fewest points they had allowed since shutting out the Giants on the road on Dec. 16, 2018. The Chiefs hadn't been held to three points since Dec. 30, 2012 — their final game before Andy Reid was hired as coach.

“It was a beautiful sight to see, seeing everybody out there make plays,” linebacker Rashaan Evans said after the game. “Whenever you see something like that, it is just contagious.”

Tennessee is holding opponents to an average of 23.4 points a game, which is tied for 15th. Last year, the Titans ranked 24th, allowing 27.4 points.

Pressure up front has been key. Bud Dupree, their big free agent addition this offseason, got his first sack this season to end the Chiefs' first possession. Lineman Denico Autry, another free agent signee, led the Titans with two sacks last week. A pressure by Autry set up an interception by Byard, his third this season.

Landry already has two more sacks than he managed all of last season, and the fourth-year linebacker is 1 1/2 off his career high of nine. Landry pressured plenty of quarterbacks in 2020. Outside linebackers coach Ryan Crow said Landry is finishing off pass rushes where maybe the linebacker was an inch or an arm away before.

The Titans have had to patch, mix and match because of injuries. Dupree missed three games before returning against Buffalo. Linebacker David Long has started six games with Jayon Brown on injured reserve.

The secondary has been hit hardest. Cornerback Kristian Fulton, who moved into the starting lineup this season, is on injured reserve with a hamstring injury. Cornerback and top draft pick Caleb Farley tore an ACL. Safety Amani Hooker, who replaced Kenny Vaccaro as a starter, recently returned from IR.

NOTES: Nine Titans did not practice Wednesday with LG Rodger Saffold getting the day off to rest. WR A.J. Brown was limited for rest. LT Taylor Lewan (concussion) practiced fully for the first time since being carted off the field against Buffalo on Oct. 18, and his backup Kendall Lamm (ankle) practiced fully.