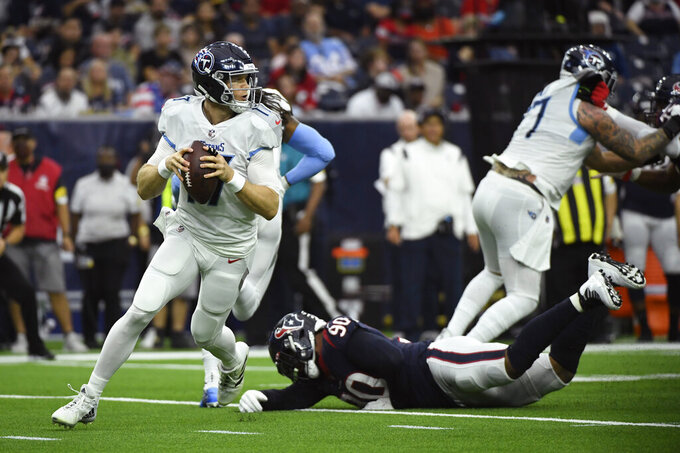 Tennessee Titans quarterback Ryan Tannehill (17) looks to throw against the Houston Texans during the first half of an NFL football game, Sunday, Jan. 9, 2022, in Houston. (AP Photo/Justin Rex )

NASHVILLE, Tenn. (AP) — Ryan Tannehill disputes the idea he ever lost his mojo as the Tennessee Titans quarterback.

In a season where Tannehill was one of only three Titans on the offense to start every game during the regular season, the 10-year veteran led Tennessee to a 12-5 record and the AFC’s No. 1 seed. That’s a first for a quarterback who never played in the postseason until coming to Tennessee in 2019.

That makes having a third straight shot at playoff success even more fun for a quarterback who loves winning.

“I love doing that and I’m proud of our guys and the way we’ve ... fought through a lot and continued to find ways to win," Tannehill said. “So, it hasn’t always been perfect and pretty — it’s football, it never is. So, the fact that we can continue to find ways to win has been a lot of fun.”

Now the Titans hope to tap into Tannehill's experience Saturday in the divisional round against his young counterpart, Joe Burrow.

The quarterback who won the national championship with LSU before becoming the No. 1 pick in the 2020 draft just s napped a 31-year playoff win drought for the Cincinnati Bengals (11-7) in his NFL postseason debut.

“I’ve played in a lot of big games throughout my career,” Burrow said Tuesday. “Whether it’s this year, I mean every game the last half of the season was a playoff game or those games playing in the college football playoffs and the national championship I think I’ve been in that situation before.”

Tannehill, the highest player drafted in 2012 still playing, will be making his fifth playoff start with Tennessee. He has postseason wins over Tom Brady and Lamar Jackson from the Titans' run to the AFC championship game two years ago.

Titans coach Mike Vrabel has made it clear he loves Tannehill, particularly the quarterback's toughness. Only Burrow was sacked more (51) than Tannehill (47) during the regular season.

“His toughness is second to none," Vrabel said. "I know that being a professional quarterback requires a level of toughness. I am not going to say that our guys aren’t tough, but we know that Ryan has a very high ability to stand in there and not flinch.”

Cincinnati coach Zac Taylor knows that, and Tannehill, only too well. He was a graduate assistant at Texas A&M when Tannehill played both wide receiver and quarterback, and Taylor also coached quarterbacks including Tannehill for four seasons with the Dolphins.

Taylor said Tannehill can make every throw and the former pre-med student could have played receiver in the NFL if he had wanted. Tannehill caught 55 passes for 844 yards and five touchdowns his first season in college.

“He’s a tremendous quarterback,” Taylor said. “It’s no surprise he’s helped that team get in the position they’ve been in these last couple of years. He really executes that offense at a high level and he can make a defense pay if you let him. They’ve got the right quarterback on board there.”

Tannehill's experience certainly paid off for Tennessee as Titans shuffled through 91 players, an NFL record in a non-strike season. Derrick Henry, the 2020 AP NFL Offensive Player of the Year, missed the final nine games. Wide receivers A.J. Brown and Julio Jones both had stints on injured reserve.

So while Burrow was rewriting the Bengals' record book with a 108.3 passer rating, 4,611 yards passing and 34 TDs, Tannehill's best statistic might be how the Titans won their most games and also earned the No. 1 seed for the first time since 2008.

Tannehill did match his career high with seven TD runs, but he had his lowest passer rating since 2015. He also had 14 interceptions while throwing for 3,734 yards and 21 TDs. He helped the Titans win three of their final four games to clinch that top seed.

How much will his added experience help Saturday?

“Hopefully it helps a little bit,” Tannehill said. “You have been there before. The experience is not new. At the end of the day, you have to go out and execute and play well.”

NOTES: The Titans practiced in shoulder pads Tuesday with Henry, who remains on injured reserve, getting his most extensive work since the team opened his 21-day window to practice. They even had Henry thud into, and through, a couple of defenders during individual drills open to reporters. ... The Titans had their shortest injury report yet Tuesday with everyone practicing. DL Teair Tart (ankle) was limited and DL Naquan Jones (knee) practiced fully after missing the regular-season finale. CB Buster Skrine (hamstring) also practiced fully.