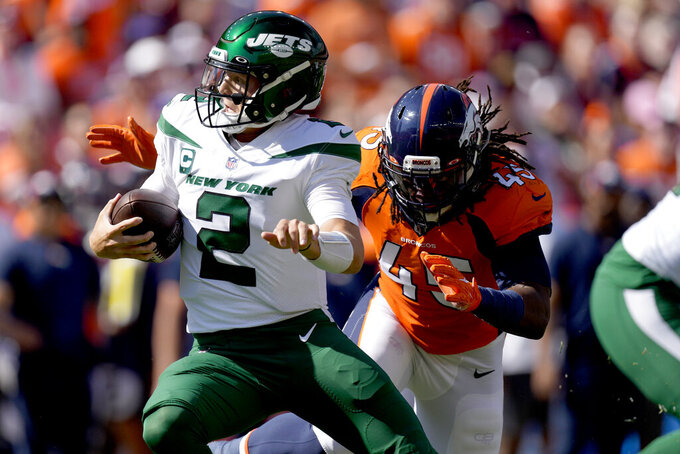 OPENING LINE: Titans by 7 1/2, according to FanDuel SportsBook.

TURNOVER DIFFERENTIAL: Titans minus-6; Jets minus-5.

TITANS PLAYER TO WATCH: Derrick Henry. The reigning AP NFL Offensive Player of the Year has 381 combined yards in the past two games, including 86 yards receiving. Henry also is leading the NFL in rushing with 353 yards, the best September total of his career. Better yet, he has at least 100 yards rushing in 11 of his last 12 road games in the regular season.

JETS PLAYER TO WATCH: Zach Wilson. The rookie quarterback has gotten off to a rough start with just two touchdown passes and a whopping seven interceptions, which ties him with Jacksonville's Trevor Lawrence for the NFL lead. The dazzling playmaking skills that made him the No. 2 pick — behind only Lawrence — have not been on display much, mostly because Wilson has been under duress. He has been sacked an NFL-high 15 times in three games.

KEY MATCHUP: Wilson against a Titans defense coming off its best performance this season. Tennessee held the Colts to 265 yards and allowed only three first downs on 12 third-down attempts. The Titans are looking for more turnovers with only one takeaway through three games after having 23 last season.

Jets S Marcus Maye will be out a few games with an ankle injury. WRs Elijah Moore and Jeff Smith are both in the concussion protocol and won't play this week. Moore was hurt at Denver, while Smith was injured in a car accident Wednesday.

SERIES NOTES: Tennessee has won four of the last five meetings. ... The Titans rallied from a 16-0 deficit in the first half and 22-13 in the fourth quarter in the last meeting in 2018 to beat the Jets 26-22 on Marcus Mariota's 11-yard touchdown pass to current Jets WR Corey Davis with 36 seconds remaining. ... The franchises have met just once in the postseason, when the then-Oilers beat the Jets 17-10 in a 1991 AFC wild-card game during which Warren Moon threw two TD passes to Ernest Givins.

STATS AND STUFF: This is the first of a two-game road swing for Tennessee, which is at Jacksonville next week. ... The Titans are 12-5 on the road since the start of the 2019 season. ... The Titans are 14-2 when scoring first since the start of the 2019 season. ... QB Ryan Tannehill had his 24th career game with at least three TD passes and his ninth since becoming the Titans’ starter in October 2019. ... Titans OLB Ola Adeniyi has 2½ sacks combined over the last two games. ... The Titans have had only six punts this season. That’s tied for the fewest in franchise history through three games and fewest since the then-Houston Oilers had six punts through the first three games of 1992. ... The Jets have scored six points in their last two games combined. ... New York is looking to avoid its third straight 0-4 start. ... Under first-year offensive coordinator Mike LaFleur, the Jets have not led at any point in any game this season. ... The Jets' 20 points through three games ties the 1976 squad — Joe Namath's last season with the team — for the fewest in franchise history, according to ESPN Stats & Info. ... WR Braxton Berrios leads New York in both receptions (14) and yards receiving (150).

FANTASY TIP: Titans TE Anthony Firkser is expected to return after sitting out the last two weeks with a knee injury and with the Jets thin at safety, he could be a sneaky good play especially if Tannehill finds success with him early.