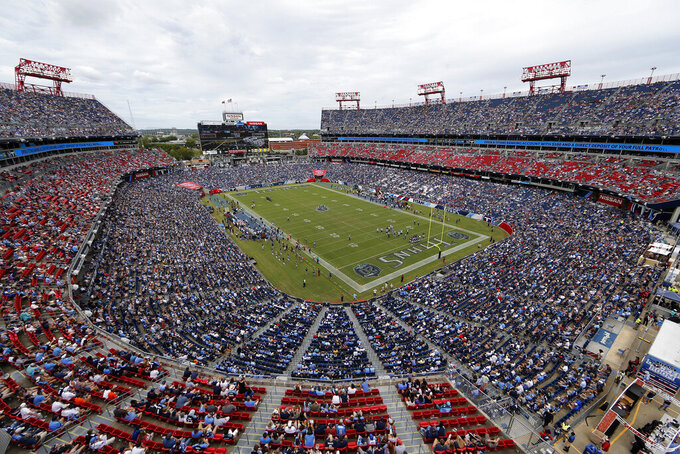 FILE - The Tennessee Titans play an NFL football game against the Houston Texans at Nissan Stadium in Nashville, Tenn., Sept. 16, 2018. The Tennessee Titans have lined up the last financing for an estimated $2.1 billion domed stadium that will put the franchise in position to host a Super Bowl once the new building opens with a target date of the beginning of the 2026 season. The Titans and Nashville Mayor John Cooper announced the agreement at a news conference Monday, Oct. 17, 2022, providing $760 million in bonds issued by the Metro Sports Authority in a deal that still must be approved by the Metro Nashville City Council. (AP Photo/James Kenney, File)

NASHVILLE, Tenn. (AP) — The Tennessee Titans and Nashville have their eyes on hosting a Super Bowl, a Final Four, a College Football Playoff game and much more after lining up the last financing for an estimated $2.1 billion domed stadium they hope opens for the start of the 2026 season.

The Titans and Nashville Mayor John Cooper announced the agreement Monday with $760 million in bonds issued by the Metro Sports Authority in a deal that still must be approved by the Metro Nashville City Council.

Combined with $500 million in state bonds, the Titans are getting what is considered to be the largest public commitment of $1.2 billion in public funding for an NFL stadium.

“We’re proposing a new stadium paid for by the team, the state, tourists and spending around the stadium, not by your family,” Cooper said. "Now, using this financial strategy, we are getting a much better stadium and a much better deal.”

Cooper said this new lease uses money not available for other city purposes and that doing nothing was not practical or responsible under the existing lease. He also called renovating Nissan Stadium “financially irresponsible.”

The Titans are planning a stadium with a translucent roof and a capacity between 55,000 and 60,000 that will be usable year-round using Manica Architecture, which designed the Raiders' Allegiant Stadium in Las Vegas and the NBA champion Golden State Warriors' Chase Center in San Francisco.

“This new agreement is the win-win-win scenario we always believed was possible," Titans President and CEO Burke Nihill said. “Nashville’s new stadium will be a game-changer for the city and the community.”

As part of the deal, the Titans agree to waive $32 million owed by Nashville for the money spent by the team maintaining the stadium over the past four years. The Titans also will be paying off the remaining $30 million in bonds owed for the current stadium.

A new 1% hotel/motel tax, all of in-stadium sales tax and 50% of sales taxes from 130 acres around the stadium will pay off the bonds. The Tennessee legislature approved $500 million in bonds for a combined commitment topping New York's$850 million commitment to a new $1.4 billion stadium for Buffalo.

Mark Cunningham, spokesman for the Beacon Center of Tennessee, called this a “raw deal for taxpayers” and said the free market think tank doesn't support any taxpayer money going to a stadium for millionaires and billionaires.

“It’s hard to imagine a proposal more out of touch with the public and the needs of the city than this one,” Cunningham said.

The Titans have been negotiating with city officials for months to finalize the agreement announced Monday that includes a new 30-year lease.

Nashville hired an independent consulting firm to confirm the Titans' estimate of the cost the city would pay to maintain the stadium under the lease signed in 1996. Venue Solutions Group essentially confirmed the Titans' appraisal, putting the cost between $1.75 billion and $1.95 billion over the remaining years on the lease.

The Titans, with help from the NFL, and the sale of personal seat licenses are expected to provide $840 million in funding. The Titans have been clearing money for their portion of the stadium.

Controlling owner Amy Adams Strunk already paid for the expansion of the team's headquarters that essentially doubled the size of the building that opened in August 1999. Strunk said in a statement she doesn't think her father could've imagined a better home when he moved his team here 25 years ago.

“The way the people of Tennessee have embraced this team as their own is truly something special, and I am thrilled that with this new agreement, we will cement our future here in Nashville for another generation," Strunk said.

Nissan Stadium originally opened for the 1999 season, then named Adelphia Coliseum. The stadium package cost $292 million in the deal that convinced franchise owner Bud Adams, who died in 2013, to move the Oilers' franchise he founded in Houston in 1960 as part of the original American Football League, to Tennessee in 1997.

The Titans originally planned to renovate the stadium until a study doubled the original estimated costs of $600 million to $1.2 billion.

The new stadium would be built on the parking lots between the current stadium and Interstate 24. The deal announced Monday returns control of 66 acres, including the current site of Nissan Stadium, to Nashville. City officials have been planning a renovation to feature a park, greenways, affordable housing and a new road.