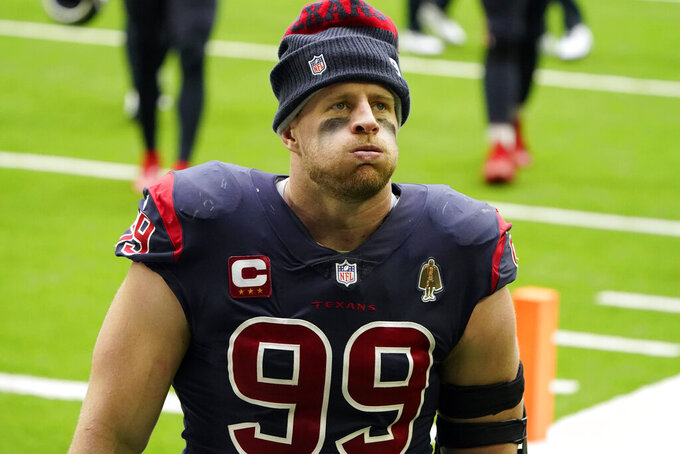 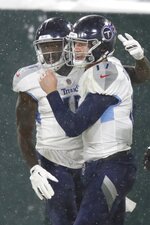 HOUSTON (AP) — The Tennessee Titans will secure their first AFC South title since 2008 with a victory over the struggling Houston Texans on Sunday.

They’ll also capture the division if Indianapolis loses, and can secure a playoff berth for the second straight season with losses by Baltimore or Miami or three other scenarios involving ties or losses.

But the Titans (10-5) aren’t interested in relying on anyone else to get into the postseason, and are focused on taking care of business against the Texans (4-11).

“It doesn’t get any more clear than it is for us right now. We win this game, find a way to win, (we) win the division,” Tennessee quarterback Ryan Tannehill said. “That’s one of the things we set out to do this year. It’s pretty clear what we need to do. We just have to go out and make it happen.”

A key to doing that will be the performance of running back Derrick Henry.

“It’s whatever it takes to win and keeps us an opportunity to get in the playoffs,” Henry said. “Even though their record is not good ... they’ve been playing good football. Every game they’ve been in, they’ve been pretty close.”

He can step on the field Sunday with his second straight NFL rushing title locked up, making him the first to do that in consecutive seasons since LaDainian Tomlinson in 2006-07.

Henry has a career-high 1,777 yards rushing and a 220-yard lead over the closest running back, and Dalvin Cook won’t be playing for Minnesota in the wake of his father’s death. Henry is 223 yards from becoming the eighth player in NFL history to run for at least 2,000 yards in a season and the first since Adrian Peterson had 2,097 in 2012.

Henry has run for 200-plus yards in his last two meetings with Houston. In Week 6, he had 212 yards rushing his 5-yard score in overtime lifted the Titans to a 42-36 win. In last year’s finale against Houston, he had 211 rushing and three TDs.

Long out of playoff contention, the Texans are desperate for a win to snap a four-game skid and end this dismal season on a positive note. To have any chance for that to happen, they’ll need another big game from Deshaun Watson, who ranks second in the NFL with 4,458 yards passing.

“He’s fantastic,” Tennessee coach Mike Vrabel said. “There’s a calmness. I don’t think there ever looks like there’s any panic when things break down sometimes in the pocket. He’s got amazing play strength, quick release, can throw from different platforms with guys hanging all over him. It’s a huge challenge.”

The Titans do have help on the practice squad with Sam Sloman, a seventh-round draft pick by the Rams earlier this year. Sloman played seven games for Los Angeles before being released. Sloman was 18 of 21 on extra points and was 8 of 11 on field goals with a long of 42. Trevor Daniel spent the past two seasons with Houston and has punted in two games for Tennessee as a member of the practice squad. He had a shanked punt and a blocked punt that contributed to a loss to Indianapolis on Nov. 29.

So, are the Titans ruling out Kern or Gostkowski for a must-win game?

“With respect to that question, we’ll let you know on Sunday,” Titans coach Mike Vrabel said.

Watson is putting up the best statistics of his four-year career this season. He needs just 313 yards passing on Sunday to pass Matt Schaub (4,770) for most in a single season in franchise history.

Watson, who was the 12th overall pick in 2017, has thrown just one interception in his last 10 games and has thrown for more than 300 yards in five of his last six games. His 4,458 yards passing and 30 touchdowns are both career highs and he has nine 300-yard games this year.

David Quessenberry started his NFL career as a sixth-round draft pick of the Houston Texans in 2013. But the first five starts of his career have come with Tennessee at left tackle with Taylor Lewan out for the season with a torn ACL.

Now he gets the start against his former team and likely will see J.J. Watt a few times. Quessenberry is excited about this game and that going back to Houston will be cool. The Titans also know they have to be ready for wherever Watt lines up.