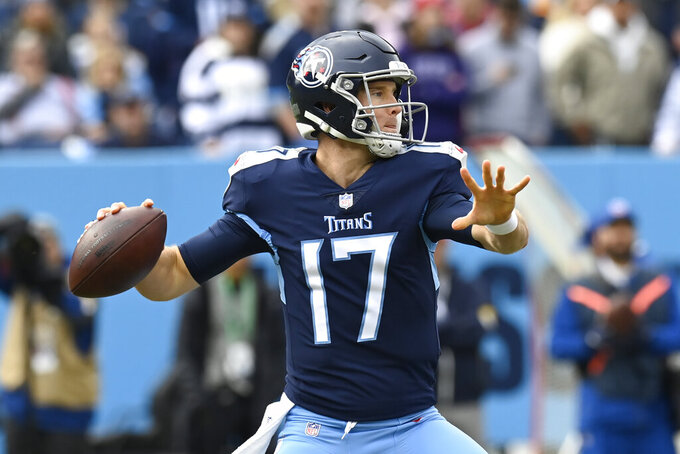 NASHVILLE, Tenn. (AP) — The Tennessee Titans have placed backup quarterback Logan Woodside on the reserve/COVID-19 list, their second player put on that list in three days.

This leaves starter Ryan Tannehill as the only quarterback on the roster as the Titans (8-3) prepare to visit New England (7-4) on Sunday. Woodside, who has not been seen wearing a mask, could test negative twice over 48 hours to be cleared before kickoff if vaccinated.

Kevin Hogan is on Tennessee's practice squad and would be promoted to the active roster Saturday if Woodside doesn't clear the COVID-19 protocols. Hogan walked out to practice Wednesday wearing a mask.

He was a fifth-round pick by Kansas City out of Stanford in 2016. He has played in eight NFL games, with one start, all with Cleveland in 2016 and 2017. The Titans signed him to the practice squad after Carolina signed Matt Barkley to its roster off the Tennessee practice squad Nov. 10.

The NFL is requiring players and staff to wear masks inside team facilities regardless of vaccination status for a week starting on Thanksgiving, and they must be tested twice for COVID-19 after the holiday.

The league updated its protocols as a result of increasing rates of COVID-19 across the country. Green Bay Packers quarterback Aaron Rodgers and Pittsburgh Steelers QB Ben Roethlisberger each missed a game in consecutive weeks because of COVID-19.