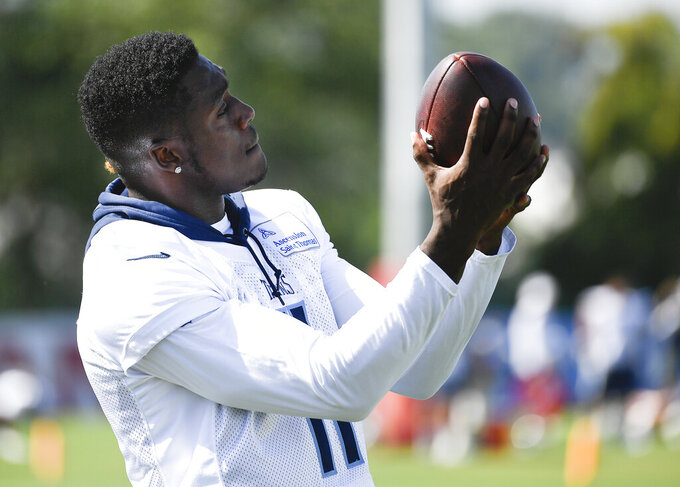 FILE - In this Aug. 11, 2019, file photo, Tennessee Titans wide receiver A.J. Brown (11) pulls in a catch during NFL football practice at Saint Thomas Sports Park in Nashville, Tenn. Brown might be the happiest that he’s finally back in team drills with Tennessee, even if he’s still being limited as he recovers from an injured left hamstring. The frustration at simply watching had been building for Brown day by day.(George Walker IV/The Tennessean via AP, File)

The frustration at simply watching had been building for Brown day by day.

"It's been a struggle I wasn't in there," Brown said Monday. "Of course, I want to come out and watch practice. I watch the film, I'm kind of upset I'm not on the film. It's a blessing just to be out here."

Tennessee's draft class has spent a big chunk of training camp dealing with injuries. First-round pick Jeffery Simmons currently is on the non-football injury list after tearing his left ACL in February preparing for the draft. The Titans put linebacker D'Andre Walker, their sixth-round pick out of Georgia, on injured reserve over the weekend. Offensive lineman Nate Davis, their third-round pick out of Iowa, has not practiced since leaving early Aug. 1.

Brown, the second-round pick out of Mississippi, slipped and hurt his left hamstring running a route during an individual drill on the opening day of training camp. Offensive coordinator Arthur Smith said Monday that he later apologized to Brown for pushing him to finish after the receiver slipped with the injury.

The rookie receiver returned to practice Sunday, though the Titans limited him to stretching before sending him off to a side field to work with coach Mike Vrabel and fellow receiver Corey Davis. Brown was in pads Monday and took some snaps in team drills even as the Titans limited his work to avoid aggravating his left leg.

"I'm headed in the right direction," Brown said. "Feeling pretty good. I'm trying to take it one step at a time."

Vrabel said the Titans will see how Brown feels after the increased practice before deciding how much the rookie might do Wednesday in the first of two joint practices with the New England Patriots.