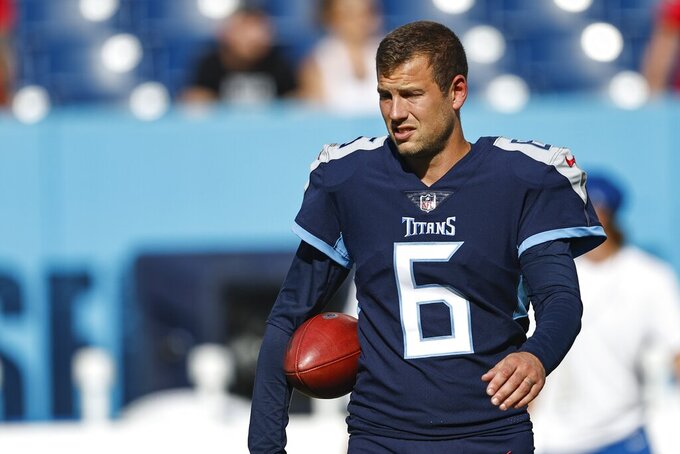 FILE - Tennessee Titans punter Brett Kern (6) is seen before their game against the Tampa Bay Buccaneers, Saturday, Aug. 20, 2022, in Nashville, Tenn. Three-time Pro Bowl punter Kern is Tennessee’s longest-tenured player and needs just four punts to become only the 25th NFL player with 1,000 career punts. Kern may wind up losing his job to an undrafted rookie from Colorado State with one of the strongest legs the veteran has ever seen. (AP Photo/Wade Payne, File)

NASHVILLE, Tenn. (AP) — The Tennessee Titans told three-time Pro Bowl punter Brett Kern on Monday that he will be released, going with an undrafted rookie to replace the man who had been their longest-tenured player.

The NFL deadline for teams to trim rosters to 53 is Tuesday afternoon. Titans general manager Jon Robinson said in a statement that Kern embodies everything they look for in a player for Tennessee.

“He has been at the top of his game for a long time in this league, has been an outstanding leader for us, and has been an excellent representation of the Titans in our community,” Robinson said. "I’m blessed to have worked with him, and on behalf of the entire organization, we wish him all the best moving forward.”

Kern spent 13 seasons with Tennessee after being picked up off waivers during the 2009 season. He joined former linebacker Derrick Morgan as the only players to play for each coach the Titans have had since the franchise moved to Tennessee in 1997.

The punter posted a message on social media, calling it an honor and privilege to play for the Titans the past 13 years.

“I will never forget watching two running backs rush for 2k, holding a game-winning kick in 0-degree weather, experiencing a playoff run that almost took us to the Super Bowl, going to 3 Pro Bowls with my family and teammate, jumping out of cardboard boxes in the hallway to scare the rookies ...,” Kern wrote.

Kern, 36, lost his job to rookie Ryan Stonehouse out of Colorado State. Kern said he knew in April that there would be a competition, with the rookie hitting the ball like he had seen only three or four other players do in his lifetime.

The veteran had been in the final year of his contract and has only a $550,000 “dead cap” hit. He is from Grand Island, New York, and could be headed back to his home state with the Buffalo Bills needing a punter. The Titans visit Buffalo on Sept. 19.

Last season, Kern ranked third in the NFL of punts downed inside the 20 compared with touchbacks. He placed 59.5% of his punts (22 of 37) inside the 20 for the best results by any punter with at least 30 punts since 1991. Kern earned his third straight Pro Bowl nod in 2019.