Titans remember what they do best before AFC South rematch 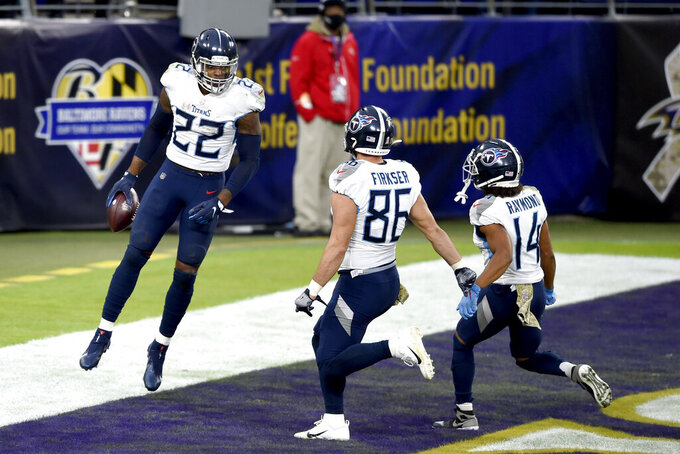 NASHVILLE, Tenn. (AP) — The Tennessee Titans think they got back to what they do best, and that's just finding a way to win.

Just in the nick of time.

Losers of three of four and trailing 21-10 early in the third quarter, the Titans responded and at last looked like the team that won its first five games by taking four in the final two minutes of regulation or overtime. They scored 20 of the final 23 points in beating Baltimore 30-24 in overtime.

Their resilience and grit combined with some big plays provided a confidence boost that couldn't have come at a better time.

The Titans (7-3) now have won two of three. Next is a chance at payback and control of the AFC South on Sunday with a trip to Indianapolis against the Colts (7-3), who beat them in Nashville on Nov. 12 for the head-to-head tiebreaker.

The offense once again. The Titans scored at least 30 points for the first time since Oct. 18, and trailed by 11 before outscoring the Ravens 20-3 to finish the game. Wide receivers Corey Davis and Brown were shut out in the first half. Then Davis caught all five passes after halftime for 113 yards. Brown caught four of five passes for 62 yards, including and a 14-yard TD reception for the lead late in regulation when he broke four tackles to score.

They also outgained Baltimore 423-306. Ryan Tannehill overcame his fourth interception of the season and finished with 259 yards passing and two TD passes — most of that after halftime. He says the Titans never lost faith and finally were able to fight through adversity during a game.

“There’s a lot of confidence throughout our team that we’ve been on a touch stretch there, but when we get in a tough situation we’re going to keep fighting and find a way to win,” Tannehill said.

The defense again struggled on third downs, allowing the Ravens to convert 9 of 15 (60%). But the Titans did show stinginess by holding Baltimore to three field goals on four trips inside the Tennessee 20. Amani Hooker intercepted a pass, and the Titans forced the Ravens' three-and-out to open overtime.

Derrick Henry. Not only is the NFL rushing leader the first running back to 1,000 yards this season, he also became the first in league history to run for the winning TD in overtime multiple times in one season. Henry also had the walk-off TD run Oct. 18 in an OT win over Houston.

He now has 1,079 yards rushing and six 100-yard games this season, and that game-winning TD was the 50th of Henry's career. It earned him a Twitter shout-out from LeBron James calling Henry the “FINISHER.”

Offensive coordinator Arthur Smith. Going with a wildcat snap to Henry on second-and-goal at the Baltimore 7 made little sense considering center Ben Jones had just gone to the sideline hurt. Jamil Douglas' first snap went over Henry's head for a 20-yard loss, forcing the Titans to settle for a field goal midway through the third quarter.

The Titans are very banged up. They lost their leading tackler Jayon Brown when the linebacker's left elbow bent in the wrong direction. Left tackle Ty Sambraillo, who replaced Taylor Lewan (out with a torn ACL) went to the locker room late in the fourth quarter. Left guard Rodger Saffold missed the game with an injured ankle. And the Titans already put outside linebacker Jadeveon Clowney on injured reserve last weekend.

0 — The number of snaps offensive tackle Isaiah Wilson, the No. 29 pick overall in April, has taken this season. But he did dress for the first time against the Ravens. The Titans sure could use the healthy rookie on the field, so the sooner he's up to speed the better.

The rematch with the Colts in Indianapolis, the second game between these teams in 18 days. The Colts are one of the three teams currently with winning records remaining on the Titans' schedule.