Titans report for camp healthy, playoff loss left in past 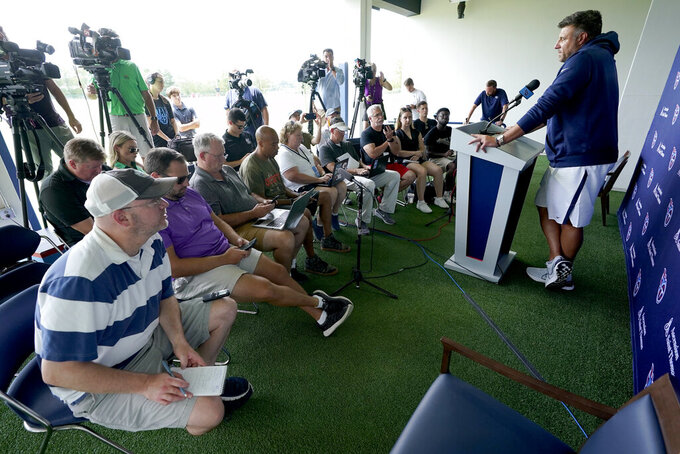 NASHVILLE, Tenn. (AP) — All that matters to the Tennessee Titans is having a healthy Derrick Henry, a driven Ryan Tannehill and one of the NFL’s best defenses back essentially intact to chase a third straight AFC South title.

Earning the AFC's No. 1 seed last season despite using an NFL-record 91 players means absolutely nothing now.

“If you don't play well in this league, you're going to lose," Titans coach Mike Vrabel said Tuesday as veterans reported for training camp. “And if you play well, you have a chance to win. We all know that. We've moved on just like everyone else has.”

The Titans certainly didn't stick with the roster that ended the season with a divisional loss to Cincinnati.

Wide receivers A.J. Brown now is in Philadelphia after being traded during the first round of the NFL draft in April, while Julio Jones was a salary cap cut in March. Left guard Rodger Saffold and cornerback Janoris Jenkins also were cap casualties.

The Titans hope they replaced Brown by drafting Treylon Burks at No. 18 overall. They also traded for veteran Robert Woods and signed a two-time Pro Bowl tight end in Austin Hooper for an offense that could feature at least five new starters.

Literally healing up may be the biggest focus for a franchise that put 26 different players on injured reserve, not counting 21 on the reserve/COVID-19 list, during the season. Henry, the NFL rushing champ in 2019 and 2020, was the biggest loss with a broken right foot keeping him out nine games.

General manager Jon Robinson said he's not sure where all the “video game rankings” posted over the past couple of weeks have the Titans. Robinson said he likes this group's camaraderie and trajectory building through the offseason program. Now the key is to keep winning one day at a time.

“That’s the only way you’re going to get to where you want to be," Robinson said.

Burks' conditioning and health were in question with the rookie missing drills and practices in the offseason program. Asthma also was an issue. Vrabel said Burks has put together two good days with rookies, quarterbacks and injured players reporting last weekend. Robinson said Burks was very transparent when he met with them before the draft.

The GM also likes what he's seen of Burks so far.

“He did a nice job in the conditioning test," Robinson said. “He’s been out here for a couple of days and and has been running around, running around well and made a couple of plays. So certainly excited with the trajectory that he’s on.”

Defensive tackle Jeffery Simmons reported to camp despite switching agents earlier this summer and being advised by a team including uncle Jason Hatcher, a former NFL player himself. Whether Simmons would report for training camp became a question after the tackle attended the mandatory minicamp but did not practice.

Vrabel said Simmons is expected to be on the field Wednesday for the first full practice of camp.

The Titans picked up Simmons' fifth-year option in May to ensure the 19th pick overall in 2019 sticks around past this year. Robinson said he wouldn't talk about where they are from a contract standpoint, though he did say he has talked with Simmons' agent.

The Titans thought they'd have Buster Skrine as a veteran in their cornerback room, but Vrabel said Skrine notified them he is retiring after 11 seasons.

The 137th pick overall in the fifth round out of Chattanooga in 2011 played 158 games with 95 starts with five teams: Cleveland, the Jets, Chicago and San Francisco before starting three of six games after joining Tennessee during last season. He had 10 interceptions, six forced fumbles and four fumbles recovered.