Titans rule out 4 players vs Raiders, 2 of them cornerbacks 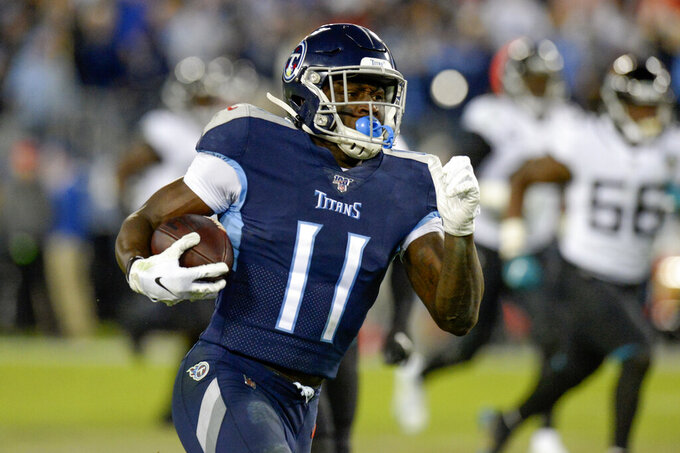 Tennessee Titans wide receiver A.J. Brown (11) scores a touchdown on a 65-yard pass reception against the Jacksonville Jaguars in the second half of an NFL football game Sunday, Nov. 24, 2019, in Nashville, Tenn. (AP Photo/Mark Zaleski)

NASHVILLE, Tenn. (AP) — Tennessee has ruled out four Titans for Sunday's game in Oakland and will be without a pair of cornerbacks with starter Adoree' Jackson and backup LeShaun Sims both out with injuries.

Neither Jackson, who hurt a foot in last week's win at Indianapolis, nor Sims, who sat out last week with an injured right ankle, practiced all week. That leaves Tramaine Brock, claimed off waivers earlier in the week, likely to play against the Raiders (6-6). Tennessee was already thin in the secondary with Malcolm Butler on injured reserve.

The Titans (7-5) also said Friday that wide receiver Adam Humphries (ankle) and linebacker Daren Bates (shoulder) will not play after not practicing all week.

Tennessee did get a bit of good news. Receiver A.J. Brown left Thursday's practice after stretch with a calf issue, but the rookie who's leading the team with 626 yards receiving and four touchdown catches practiced fully Friday.