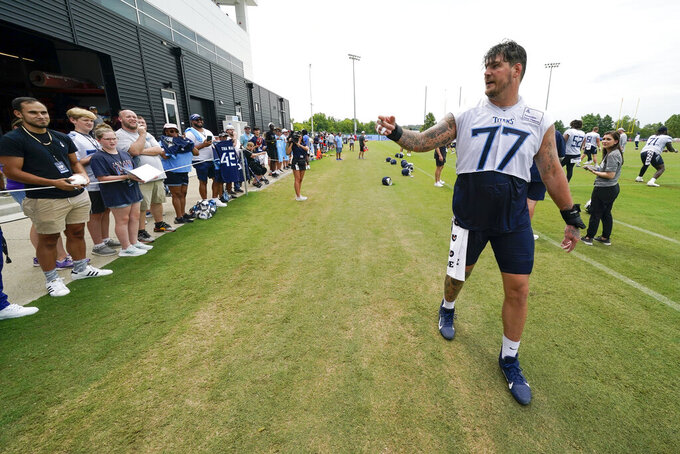 Dillon Radunz is trying to prove he can make the leap from North Dakota State to the NFL at right tackle.

Those are the two spots up for grabs in training camp on an offensive line looking to make serious improvement over 2021 when Ryan Tannehill was sacked 47 times — more than all but one other NFL quarterback.

And both Brewer and Radunz want those jobs to help block for running back Derrick Henry.

Radunz has the same mindset: “Obviously I’m there, I’m in that spot and you’re like, ‘Yeah, that’s the mindset.’ It’s my job. I need to protect it.”

The Titans drafted the 6-foot-6, 301-pound Radunz with the 53rd overall pick in 2021 to be a starter. Radunz struggled not only making the leap from the Football Championship Subdivision in college but played only one game in 2020 because of the pandemic. He was an emergency starter as a third option at left tackle last December.

Then Radunz was one of the Titans' offseason award winners for how hard he worked. Offensive coordinator Todd Downing said Tuesday that Radunz has been committed to trying to improve in so many areas that they asked him to focus on including both physical development and individual techniques.

“The hard work has been really cool to see,” Downing said. "It means a lot to him.”

The 6-1, 295-pound Brewer joined the Titans as a camp body in 2020 and wound up doing more than making the final roster cuts for two straight seasons. Brewer played in 12 games as a rookie and another 12 last season, starting five games as the Titans dealt with injuries that forced them to play an NFL-most 91 players.

Brewer is trying to replace 6-5, 325-pound veteran Rodger Saffold, a salary cap casualty in March now in Buffalo. Brewer got some tips from Saffold on where to place his hands and how to run through whoever he's blocking.

“People can say all they want to do, but if you cut on the film and the tape, I win against the best of the best, the biggest," Brewer said. "So you can say what you want to say about my weight but If you look at the film, film don’t lie.”

One of the defensive linemen that Brewer has been going against every day is Jeffery Simmons, one of the three Titans to get at least eight sacks last season. Simmons said he's faced off against plenty of bigger guards than Brewer.

That's why Vrabel compared Brewer to a cheap, chewy cut of meat.