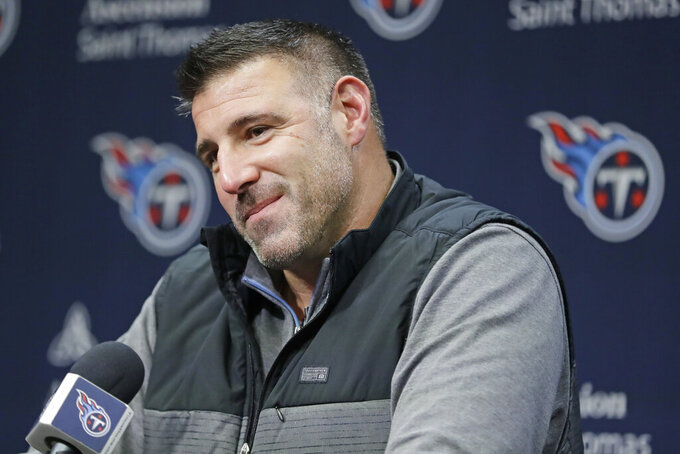 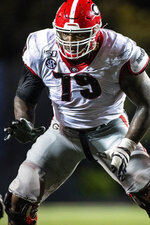 NASHVILLE, Tenn. (AP) — The Tennessee Titans believe they have drafted a player that will make Derrick Henry and Ryan Tannehill very happy.

The Titans picked Wilson at No. 29 overall, taking the 6-foot-6, 350-pound lineman to bulk up protection for both Henry and Tannehill.

“He's got excellent power to move the line of scrimmage in the run game, and he's tough to get around in the pass game,” general manager Jon Robinson said. “I thought I saw some blocks at the highest level in the SEC where he gets up to level two, and he forces linebackers, if he gets his paws on them, they're usually done for."

This is the second right tackle selected in the first round by Robinson in his five drafts with this team. Jack Conklin, an All Pro as a rookie, was Robinson's first selection for the Titans in 2016 but left for Cleveland as a free agent in March.

Wilson was the sixth offensive tackle taken overall, and Robinson said the Titans received some interest in the 29th pick that fizzled. The Titans also need help at cornerback. Wilson's size and ability creating holes in the Southeastern Conference made the tackle the easy pick after the tackle made quite the impression at the NFL combine.

Coach Mike Vrabel, 6-4 himself, said he came up to Wilson's chest when the tackle walked into the Titans' room.

“And I looked up, and he turned sideways to get into the door at the dome," Vrabel said. "So he is a big man. but he's well proportioned. It's not like he's top heavy or carries all his weight. He's a massive player that we're excited to start working with as soon as we can.”

Wilson is so big he says his size makes going through doors and shopping a challenge. His arms are 36 inches long with hands measuring 10 1/4 inches allowing him to grab defenders. Wilson said it's fun to watch the Titans' offensive line “road grade” people.

“I'm physical and I enjoy beating people up," Wilson said. “I enjoy running the ball I enjoy trying to potentially break another man's will is what I enjoy about the game.”

Robinson already has Tannehill, the AP NFL comeback player of the year and last season's passer rating leader, signed for four years. Robinson also tagged the NFL rushing leader as the Titans' franchise player, and Henry became the first running back to run for at least 180 yards in three straight games in helping get Tennessee to the conference title game.

The Titans did sign veteran offensive lineman Dennis Kelly to a three-year extension in March to replace Conklin, though Wilson now will have a chance to push for that job.

Tennessee still has six selections over the final two days of the draft to address needs including running back and wide receiver, though the Titans have no picks in either the fourth or sixth rounds.

The Titans are coming off their fourth straight winning season capped by a postseason run on the road through New England and Baltimore got them to Kansas City for the AFC championship where they lost 35-24.

Tennessee returns nine of the 11 starters from that conference title game, losing only Conklin and wide receiver Tajae Sharpe to Minnesota. But the Titans signed wide receiver Adam Humphries as a free agent last March, and he should play much more if he stays healthy. A.J. Brown led all rookies with 1,051 yards receiving.

The Titans need a backup for Henry after releasing veteran Dion Lewis before free agency opened. They ranked third in the NFL averaging 138.9 yards rushing with an offense that ranked third in points (30.4) and yards (406.2) per game over the final 10 games after Tennessee benched Marcus Mariota in favor of Tannehill.

Tennessee signed outside linebacker Vic Beasley Jr. to a one-year deal, betting he can resemble the player who led the NFL in 2016 with 15 1/2 sacks under coach Mike Vrabel. Robinson also said Monday that the Titans probably would circle back with free agent defensive end Jadeveon Clowney after the draft.

They also need to replace veteran cornerback Logan Ryan, who started every game he played for Tennessee the past three seasons. He's now a free agent, and the draft is the cheapest option right now on a defense that ranked 24th allowing 255 yards passing a game.