Titans' Tannehill making most of 2nd time around as starter 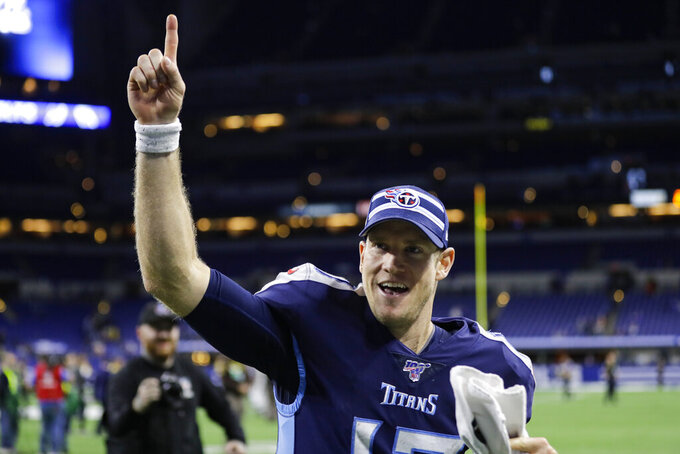 NASHVILLE, Tenn. (AP) — Ryan Tannehill is making the most of his second time around as a starter in the NFL.

And the Tennessee Titans are enjoying the ride.

Since Tennessee made him the starter in mid-October, Tannehill is 5-1 and has helped the Titans (7-5) climb a game back of division leader Houston in the AFC South. He leads the NFL with his 113.9 passer rating and average of 9.10 yards per pass. Tannehill is second in completion percentage while connecting on 72.7% of his passes.

He's been even better in the fourth quarter, helping the Titans win four times after being tied or trailing going into the final 15 minutes of games. Tennessee also is averaging 29.7 points per game with Tannehill as the QB, which is second in the NFL in that span behind only Baltimore (37).

The quarterback Miami traded away in March is playing some of the best football of his NFL career. He is playing so well, some might say he is a zone.

"Yeah ...," Tannehill said Wednesday. “We're doing some good things, have a lot to improve on. Still a lot of things we have to clean up from last week's game.”

On Sunday, if Tannehill completes more than 75% of his passes and has a passer rating of 130 or better in Oakland against the Raiders (6-6), he'll join Aaron Rodgers (2011) as the only NFL players ever to manage that in three straight games in a single season.

Oakland coach Jon Gruden said people might not remember Tannehill didn't open the season as the starting quarterback or get the starter's reps. Gruden also pointed out that coming off the bench is a hard thing to do.

"He's been money at crunch time," Gruden said. “You saw the Chiefs game. He's played very, very good football when all the chips are on the table. That's No. 1. And he's showcasing his dual threat ability. He can throw it, he can run it, and they run a lot of creative plays with him because of his athleticism. His experience and his game is going really good right now. It's a credit to him.”

It's an impressive turn around for a quarterback dumped by the team that drafted him eighth overall in 2012 out of Texas A&M. Miami wanted Tannehill gone badly enough that the Dolphins agreed to pay $5 million of his salary in trading him to Tennessee. Tannehill, who had been due $18.7 million in base salary, still counts $18.4 million against Miami's cap this season.

The way Tannehill is playing, he could wind up earning more in incentives from the Titans than the $2 million base salary they're paying him.

Tannehill, who turns 32 in July, insists he's not thinking of what the future might bring as a potential free agent.

"For me, it's a head-down process of take advantage of the week," Tannehill said. “I've seen how this thing goes. The waves and the ins and outs of the season, so if you start taking a step back at this point then you're doing a disservice to your teammates and to yourself. ... So really just trying to lock in on the Oakland Raiders and do all I can to prepare for them.”

Tannehill has impressed his teammates with his poise and confidence. Wide receiver Tajae Sharpe said it can be hard in the NFL to stay ready not knowing when that next chance will come.

“A lot of guys would've not been prepared for that opportunity, but he was absolutely ready for it. He came in, and he's been doing a great job.”

Jacksonville coach Doug Marrone watched Tannehill in Miami when the coach was in Buffalo and is impressed with what he's seeing now.

Gruden sat down with Tannehill for his Quarterback Camp series for ESPN back in 2012, and now Tannehill, who's 3-0 against Oakland, will have a chance to improve to 2-0 against the Raiders' current coach.

"I'm happy for his success," Gruden said. “Hopefully, we can slow him down.”