Titans: Took QB Willis because he was best player available 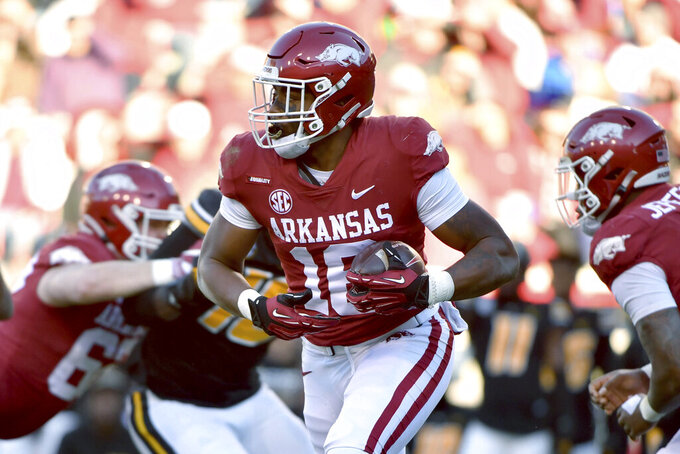 FILE - Arkansas receiver Treylon Burks (16) carries the ball against Missouri during the first half of an NCAA college football game Nov. 26, 2021, in Fayetteville, Ark. Burks was selected by the Tennessee Titans in the first round of the NFL draft Thursday, April 28. (AP Photo/Michael Woods, File)

NASHVILLE, TEnn. (AP) — The Tennessee Titans capped their second night of the NFL draft by trading up and selecting a quarterback.

The Titans insist making Malik Willis of Liberty the third quarterback taken in this draft was simply about picking the best player available, nothing more. But it could create competition at the position, even if Ryan Tannehill has the NFL's highest salary-cap figure coming off a down season.

“We’ll see how it shakes out," Robinson said. “You can’t have enough of them. We saw that last year when we went through 91 different players.”

In their third trade of this draft, the Titans dealt the 90th and 169th selections to Las Vegas to move up to No. 86 and use the pick to select the Liberty quarterback Friday night. They already have Tannehill, with Logan Woodside as his backup and Kevin Hogan.

The Titans started Friday night selecting cornerback Roger McCreary of Auburn at No. 35. McCreary was the third pick in the second round after trading out of the first round from the No. 26 selection with the New York Jets on Thursday night.

They picked Ohio State offensive tackle Nicholas Petit-Frere with the 69th overall pick for an option at right tackle before making Willis their third offensive player in this draft.

The 6-foot, 219-pound Willis threw for 2,857 yards and 27 touchdowns last season with 12 interceptions. He also ran for 13 TDs. For his career, Willis finished with 48 TD passes and 29 touchdowns rushing.

Willis was in Las Vegas for the first night at the draft, then rented out a bowling alley for Friday because he didn't have another suit for the green room. Like the Titans' selections so far, Willis visited the Titans before the draft.

“I really think we clicked out at the combine and after my pro day and every time we got a chance to meet,” Willis said.

Tannehill is coming off a season in which he was sacked 47 times and had 14 interceptions — his most since his second season in the NFL. He threw for 3,734 yards and 21 touchdowns, while also running for seven more. This will be the third year on the four-year contract he signed, and he counts $38.6 million against the cap.

And fans have been angry at Tannehill since his three interceptions in a divisional loss to Cincinnati, the last with 20 seconds left in a 19-16 loss after being the AFC's No. 1 seed.

Tennessee cut left guard Rodger Saffold and reserve lineman Josh Kline to create salary cap space in March. David Quessenberry, who started every game last season at right tackle, was a restricted free agent the Titans chose not to tender from a unit that gave up 47 sacks last season.

They signed Jamarco Jones from Seattle and also have Dillon Radunz, a second-round pick from North Dakota State a year ago.

Petit-Frere was a two-year starter for Ohio State at right tackle, starting 20 of 35 games played. The 6-foot-5, 315-pound Petit-Frere was first-team All-Big Ten in 2021 and played on three straight Big Ten title teams. A strong run blocker, he helped the Buckeyes rank first nationally in total offense and scoring offense.

The new offensive lineman is ecstatic at the thought of being able to block for Derrick Henry, calling it a “blessing.”

He and McCreary join Arkansas' receiver Treylon Burks, who the Titans drafted at No. 18 after trading A.J. Brown to Philadelphia. The Titans made two trades on the opening night, adding three more selections giving them 10 in this draft. They still have the 90th pick overall Friday night with six more Saturday.

McCreary was a first-team All-American who had 135 career tackles with six interceptions and 32 passes broken up. He joins a young secondary with Caleb Farley, a first-round selection a year ago who's recovering from a torn ACL; Kristian Fulton, a 2020 second-round pick; and Elijah Molden, a third-round pick a year ago.

“I feel like I will come in and do great with my skillset because I’m a corner that can play a lot of zone too,” McCreary said.