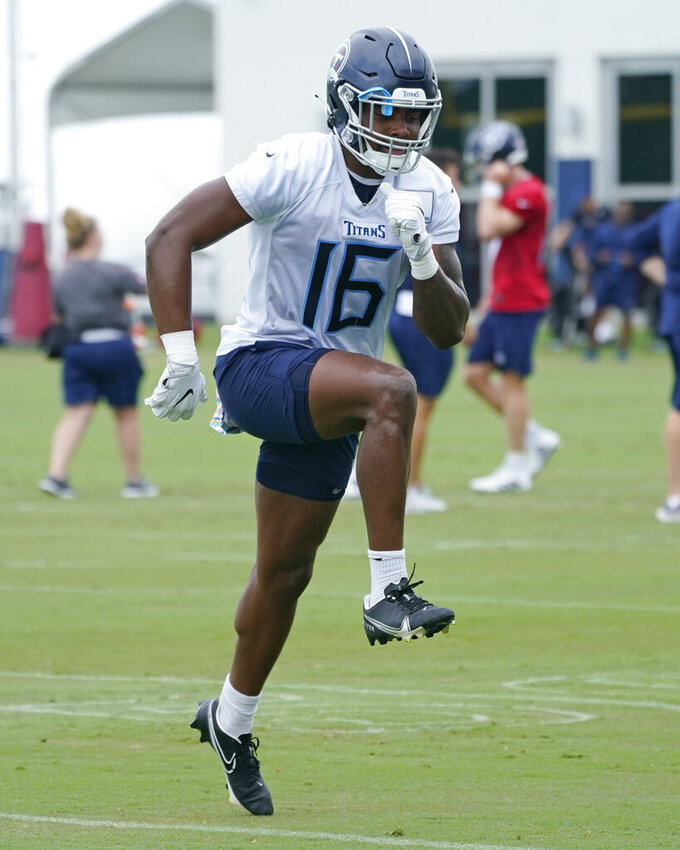 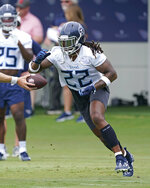 NASHVILLE, Tenn. (AP) — Treylon Burks stretched out for a fade from Ryan Tannehill and kept both hands on the ball as he went to the ground for a deep reception. Later, he reached for a catch with defenders around him.

That's exactly what the Tennessee Titans hoped to see when they drafted Burks out of Arkansas with the 18th pick overall in April to replace the guy they traded away to Philadelphia — A.J. Brown.

They just had to wait a bit.

Burks' catches came Wednesday on the opening day of training camp with the entire roster, and all eyes kept tabs on the rookie's progress and whether he worked drill-to-drill or finished the entire practice.

He did just that, and Burks said it sure helped having his asthma under control.

“That’s just being accountable, and I should’ve took a better attack on that,” Burks said. "And now that I am you can tell a big difference.”

Burks caused concern when he bowed out of his first practice in May as part of the Titans' rookie minicamp and was seen using an inhaler. Burks declined to discuss the inhaler, deferring questions to Titans coach Mike Vrabel. Wide receivers coach Rob Moore confirmed that the rookie was dealing with asthma.

General manager Jon Robinson credited Burks with being “pretty transparent” with the Titans during his pre-draft visit. Robinson drafted the 6-foot-2, 225-pound receiver to help replace Brown, their leading receiver each of his three seasons in Tennessee and a Pro Bowler in 2020.

Burks said asthma “kind of messed with me a little bit” during his freshman and sophomore years at Arkansas.

“Once I got to my junior year, I was so much more acclimated into the system and knowing my role and wanting to be better at my position,” Burks said. “And I just attacked it.”

Burks not only attacked it, he became one of Arkansas' best receivers as a junior. He caught 66 passes for 1,104 yards and 11 touchdowns to become an AP All-Southeastern Conference receiver along with Alabama's Jameson Williams, who was the 12th overall pick by Detroit.

Not being able to be on the field throughout the offseason program had Burks worried. He credits Vrabel with telling him not to worry, to keep working a day at a time and not to “harp on” himself too much.

Burks responded by dropping 5 or 6 pounds by working on his conditioning and making sure to use his inhaler before and after practice. Or as he called it, “just being accountable.”

“I should've took a better attack on that, and now that I am, you can tell a big difference,” Burks said.

Burks has the physical size and hands that drew comparisons to Brown before the NFL draft. The Titans need him to work his way into the starting lineup by their Sept. 11 season opener against the New York Giants.

Tannehill said he's excited to have Burks on the field, noting they've worked together over the past few days with rookies, quarterbacks and injured players reporting for camp last weekend. The quarterback said Burks has a long way to go, though making more plays like Wednesday will speed up that process.

“If he wins consistently and makes plays like that for me down the field, you know it gives you a lot of confidence to go his direction,” Tannehill said.

For now Burks is just trying to earn respect and let his teammates "know I’m not just here to make money, I'm here to win a championship.”

NOTES: Robert Woods, the veteran receiver the Titans traded for in March, and CB Caleb Farley both practiced Wednesday without knee braces. Each is recovering from torn ACLs that ended their 2021 seasons.