Titans try to repair struggling defense with flurry of moves 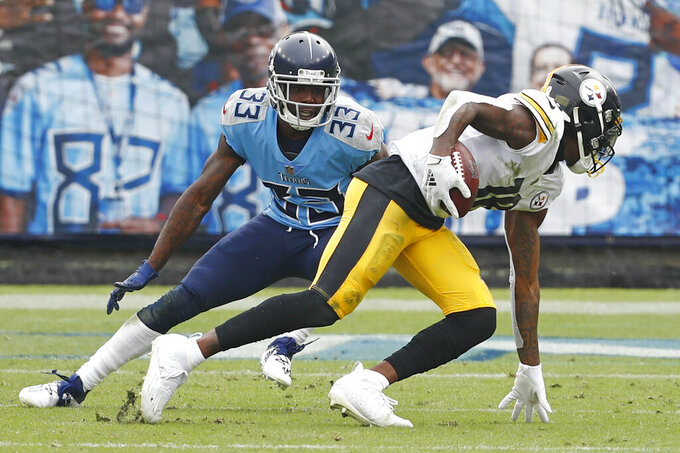 NASHVILLE, Tenn. (AP) — The Tennessee Titans made very clear they have no time to wait for their defense to improve, with the NFL's worst unit on third down contributing to a two-game skid.

A team that reached the AFC championship game last January is too busy trying not to waste a 5-0 start.

They traded for cornerback Desmond King on Monday, waived veteran cornerback Johnathan Joseph on Tuesday and told outside linebacker Vic Beasley Jr. he would be released Wednesday. Some bad snaps also cost long snapper Beau Brinkley his job after 135 games with the franchise.

Beasley is the Titans' biggest and costliest mistake this year. They signed him to a one-year deal worth $9.5 million, betting coach Mike Vrabel with his experience as an NFL pass rusher could help Beasley reclaim the form that helped him lead the league with 15 1/2 sacks in 2016.

But the linebacker reported late for training camp and spent the preseason on the non-football injury list before passing his physical on Sept. 5. He didn't play until Week 3 and finished his tenure with no sacks, three tackles and a forced fumble in five games.

Robinson said initially there had been talk of a multi-year deal with Beasley. Ultimately, he was glad they signed him to a one-year deal.

“It was time to go a different direction,” Robinson said.

Asked if not getting more out of Beasley was disappointing, Vrabel said his personal disappointment comes from losing.

“It’s an awful feeling to lose in this league,” Vrabel said. “So I want to coach better this week."

Releasing Beasley leaves the Titans (5-2) thin at outside linebacker with Chicago (5-3) visiting Sunday.

The Titans also have some punters going through the COVID-19 testing protocol to try out in case three-time Pro Bowler Brett Kern can't play Sunday. Tennessee likely will look first at Derick Roberson, who's played in only one game this season, with Tuzar Skipper and Wyatt Ray options off the practice squad for now.

Joseph was a 14-year veteran who had started six of seven games this season with Adoree Jackson on injured reserve. He had an interception and a forced fumble but was struggling as opponents converted 61.8% of third downs against Tennessee.

Robinson said it was time to look at younger players.

King has been taking part in Zoom meetings with the Titans but will not be able to join them in person until Saturday at the earliest. Jackson currently is in the third and final week of practice to see if he could be activated by Sunday.

An All-Pro in 2018, King had fallen out of favor with the Chargers. Robinson said they saw an aggressive player who has been the slot cornerback, a good tackler and blitzer who's instinctive in pass coverage, and he was glad the trade costing a sixth-round pick worked out.

The Titans rank 30th in the NFL in giving up touchdowns inside their own 20 and 25th in yards allowed per game at 396.9. They are second with a plus-8 turnover margin, which had been the saving grace during the five-game winning streak to start the season.

Robinson said he believes execution and communication will help. Vrabel said he's busy trying to make improvements to get Tennessee back winning.

And the locker room got a reminder that the NFL is a business.

“It's based on performance,” quarterback Ryan Tannehill said. "So definitely, I think, shook things up a little bit. But at the end of day, our organization is trying to do what’s best for the team.”