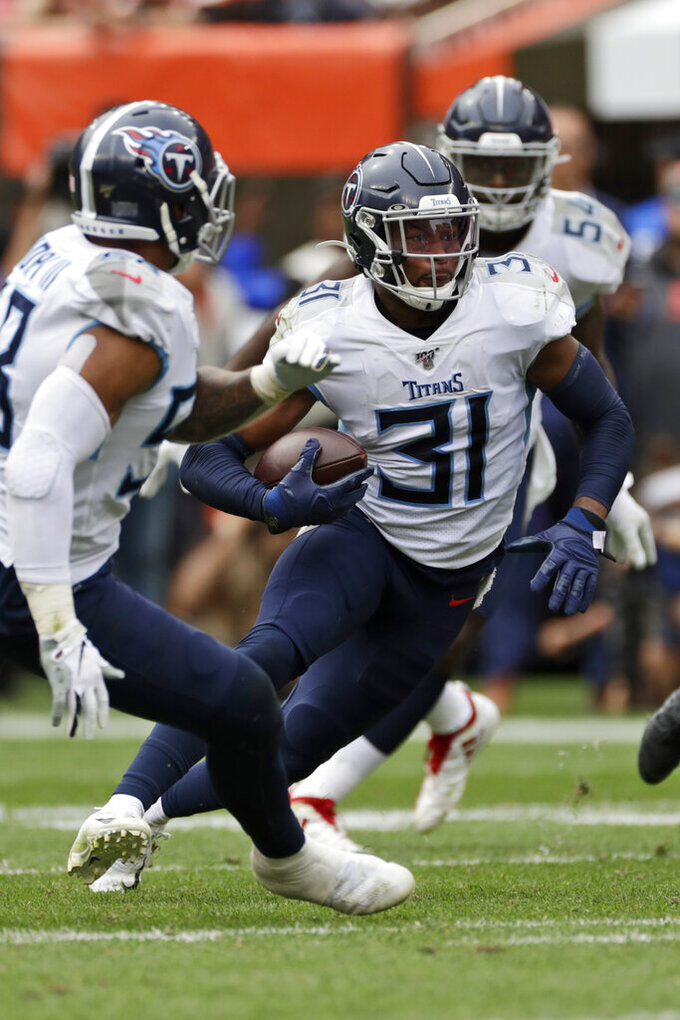 Tennessee Titans free safety Kevin Byard (31) rushes after intercepting the ball during the second half in an NFL football game against the Cleveland Browns, Sunday, Sept. 8, 2019, in Cleveland. (AP Photo/Ron Schwane) 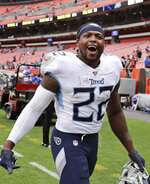 NASHVILLE, Tenn. (AP) — The Tennessee Titans are about to find out how well they can handle all the attention that comes with blowing out a preseason favorite on the road.

After routing the Browns 43-13 in Cleveland, the Titans now play their next two games inside the AFC South. They won't face Andrew Luck (now retired) on Sunday in their home opener, nor Nick Foles (injured reserve) in a road trip to Jacksonville.

It may be coach-speak, but Mike Vrabel, now 10-7 as Tennessee's head coach, said the Titans will repeat what they did last week in an approach that has taken root in his second season.

"I think everybody's just a little bit more comfortable," Vrabel said Monday. "When the players can start to point it out, I think that's when it's really starting to manifest itself into what we're looking for."

The Titans not only have picked up where they left off 2018 with a defense that was the NFL's No. 3 scoring unit, Tennessee gave every indication of improving in the second season with coordinator Dean Pees.

Nine of 11 starters are back, and the Titans had at least three interceptions, five sacks and a safety in a single game for the first time in the history of a franchise in its 60th season. Malcolm Butler returned his pick for a touchdown, the team's first since a win against Baltimore on Sept. 18, 2005, as the Titans turned each turnover into a TD for 21 points.

"We visualize this," safety Kevin Byard said. "I don't think it's anything anyone is surprised by."

Start a little faster. The Titans settled for a field goal on their opening drive. In the second half, Marcus Mariota completed all six passes for 143 yards with three touchdowns — his first such game since Nov. 13, 2016, against Green Bay. The Titans finished with their highest-scoring output since putting up 47 against the Packers, not a bad debut for new offensive coordinator Arthur Smith.

"Art did a great job of keeping calm and telling us to stick to the game plan," Mariota said.

Wide receiver A.J. Brown turned in quite the debut with three catches for 100 yards. He was among four rookies with at least 100 yards receiving on opening weekend. Brown also became the franchise's first player with 100 yards receiving to kick off his career since Sid Blanks on Sept. 12, 1964. The second-round pick out of Mississippi had only one catch for 10 yards in the preseason.

Wide receiver Corey Davis. The fifth pick overall in 2017 didn't make a catch on three targets, one thrown a bit too high by Mariota. That didn't bother Vrabel, who made clear he's proud of how Davis blocked while avoiding a penalty on Brown's 51-yard catch and also on Derrick Henry's 75-yard TD off a screen.

"The catches will come, the production will come," Vrabel said.

Right guard Kevin Pamphile may be available Wednesday, but Vrabel says the Titans might give Jamil Douglas a longer look after his seventh career start. Vrabel said the Titans came through their opener good when asked about injuries.

Two — how many sacks the starting outside linebackers combined for all of last season before Derrick Morgan and Brian Orakpo each retired. Cameron Wake, the Titans' big free agent signee for defense, topped that all by himself in his Tennessee debut with 2 ½ sacks and a safety. Sharif Finch, an undrafted free agent out of Temple last year, made his first start at outside linebacker. That allowed the Titans to use Wake for only 24 snaps, making the 37-year-old veteran's performance even more impressive.

Get past Indianapolis. Yes, Luck retired without the Titans ever beating the Colts quarterback. They are 2-0 against Jacoby Brissett, but this is a big opportunity in the first of two AFC South games in five days.