Titans unwilling to force ball to Treylon Burks in preseason 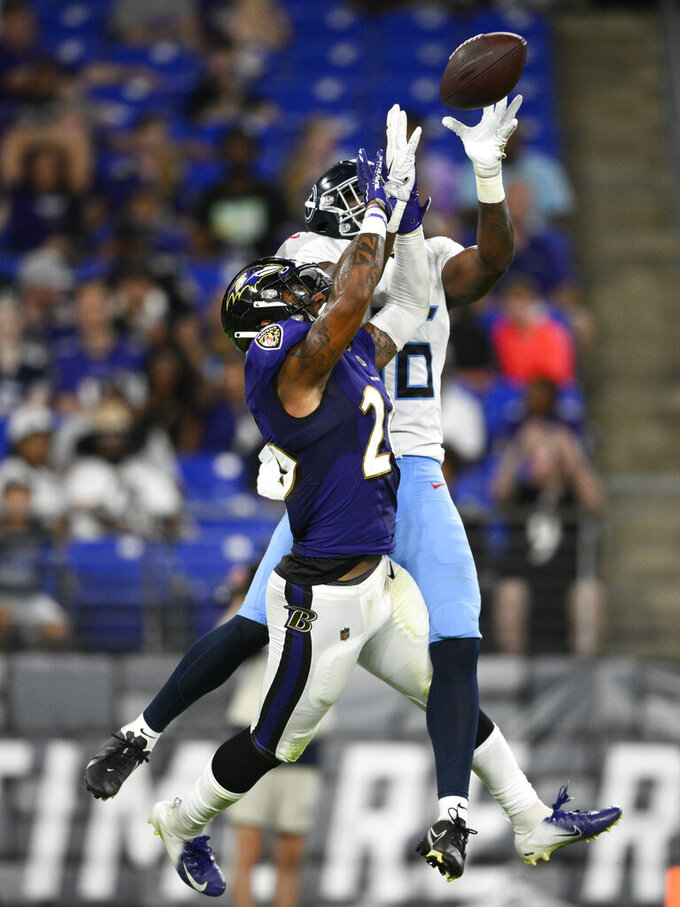 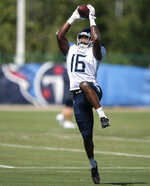 Burks has exactly one catch for four yards with a combined four targets this preseason. Because Burks was drafted at No. 18 overall with the selection acquired in the trade sending wide receiver A.J. Brown to Philadelphia, it's very easy to panic after the rookie missed much of the offseason program dealing with asthma and conditioning issues.

Titans coach Mike Vrabel said Sunday that receivers can't control when they get the ball and can only control getting open.

“I don’t want to tell quarterbacks, ‘Hey, throw it to this guy,’” Vrabel said. “That’s that’s not the direction that we really want to head.”

Burks played 35 snaps in Tennessee's 13-3 win over Tampa Bay on Saturday night — most among wide receivers with veteran Robert Woods not playing. Vrabel said he was encouraged by how Burks worked without the ball blocking and was open at times. The rookie who was an All-Southeastern Conference receiver last year at Arkansas also can run better routes at times.

One thing the Titans (1-1) will not do is force something just to get the ball to the 6-foot-2, 225-pound rookie. They host Arizona for the preseason finale on Aug. 27 ahead of the season opener Sept. 11 against the visiting New York Giants.

“We can do that with everybody, just not in the second preseason game,” Vrabel said.

Burks was wide open across the middle late in the first half when rookie Malik Willis threw to Hassan Haskins on the left side a couple plays before the Titans' lone touchdown of the game. Burks was the intended receiver on a deep ball thrown by Logan Woodside and intercepted at the Tampa Bay 20. The ball was underthrown, leaving the rookie unable to break it up.

A week ago, Vrabel said Burks needs to take the consistency he had shown in practice into games. After the second game, Vrabel said he saw improvement on areas they had talked about. Burks and others will have more adjustments needed starting again Monday at practice.

Undrafted free agent Reggie Roberson Jr. led the Titans, catching four of the five passes thrown to him for 47 yards. Fellow rookies Kyle Philips, Tennessee's fifth-round pick out of UCLA, and tight end Chig Okonkwo, a fourth-round pick out of Maryland, each caught passes for more yards than Burks, including Okonkwo's a 6-yard TD pass.

Burks has been working with Ryan Tannehill during training camp, and he also started wearing a compression sleeve on his left leg for Thursday's joint practice with the Bucs. When Burks left the game Saturday night, his left leg had some wrapping around his calf close to the knee.

The Titans have listed Burks second on their unofficial depth chart behind Nick Westbrook-Ikhine, a receiver who went undrafted out of Indiana in 2020. The Titans love how the 6-2, 211-pound Westbrook-Ikhine can play each receiver spot, and he has Tannehill's confidence averaging 12.4 yards per catch over his first two seasons.

Vrabel also has made clear the competition at punter is real despite Brett Kern being a three-time Pro Bowler going against rookie Ryan Stonehouse. Kern had the edge against the Bucs downing his two punts inside the 20, though Stonehouse matched that with two touchbacks lowering his net average to 37 yards per punt. Stonehouse also held on the two field goal and one extra point.

The left guard job appears to belong to Aaron Brewer. Right tackle is a spot that could go the distance. Rookie Nicholas Petit-Frere started at right tackle against the Bucs, then moved to left tackle. Dillon Radunz then played right tackle. Both had a penalty for a false start.