Titans will have to wait to hone offensive timing, chemistry 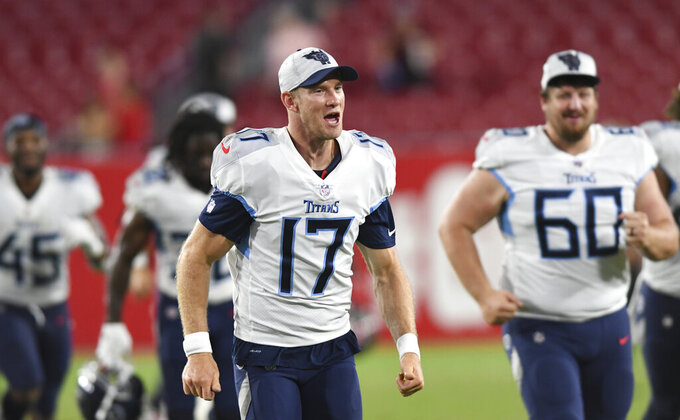 NASHVILLE, Tenn. (AP) — The closest Derrick Henry, A.J. Brown and Julio Jones got to playing this preseason came when they put on their uniforms before kickoff. Ryan Tannehill watched the preseason finale in quarantine and had plenty of company.

The Tennessee Titans have wrapped the preseason with final roster cuts due Tuesday. Exactly how they'll click on offense remains to be seen. The big test comes Sept. 12, when they host Arizona in their season opener.

“We’ll have to make up for lost time,” coach Mike Vrabel, who remains in quarantine with COVID-19, said Sunday via Zoom. “As it relates to how we feel about practice, we feel like practice is important.”

That's where the Titans' challenge increases. The projected offensive starters have been together for perhaps a couple periods in training camp with Jones joining a jog-through drill in the final week.

Yes, Henry is the AP NFL Offensive Player of the year and the back-to-back rushing champ who was just voted the No. 4 overall player in the league by his peers. Jones is a seven-time Pro Bowl wide receiver who has shown the ability to produce on game days often with little practice.

Just as the Titans appeared to be ramping up their work together, Tannehill went on the reserve/COVID-19 list Thursday. Ben Jones, their starting center, was put on that list Sunday after Vrabel talked to reporters.

“We know what the situation is," Vrabel said. “We know what it will be. We know when they’ll their availability will be, at least Ryan’s.”

Tannehill and Ben Jones are among eight Titans players currently on the COVID-19 list. Returning requires either two negative test results in 48 hours or a 10-day quarantine. Vrabel, who might be able to return Wednesday after 10 days in quarantine himself, said he had no real update.

“Everything is on schedule,” said Vrabel, who's texting those players regularly.

Tennessee traded for Julio Jones in June, hoping to boost one of the NFL's best offenses with a game-changing wide receiver. The Titans ranked fourth in scoring at 30.7 points per game and tied with Buffalo for second by gaining 396.4 yards a game, trailing only Kansas City.

Tannehill said Tuesday after his last practice he would be fine with not playing in the preseason, especially after nobody played before the regular season last year. Tannehill set a franchise record with 40 touchdowns, 33 passing and seven rushing.

The quarterback also said it was nice seeing Jones back at practice. Jones landed awkwardly on a foot Aug. 2, his first day of team drills.

“There is a lot of work to do still with him, we have talked through a lot of looks, and seen on tape other guys take the reps and talk through the space and the timing,” Tannehill said Tuesday. “Now it is just a matter of getting out here and doing it in person and make that connection.”

Tannehill and the other Titans on reserve are in meetings thanks to Zoom. Practice time may not come until opening week. The Titans are practicing Monday through Thursday, then get a few days off before returning to prepare for the opener.

Left tackle Taylor Lewan and left guard Rodger Saffold played 11 snaps in Saturday night's 27-24 loss to Chicago. For Lewan, it was his first playing time since tearing his right ACL in mid-October.

“When you get hurt, you don’t realize how fast this game can be taken away from you,” Lewan said.

Now Lewan has to prepare to face off against an Arizona pass rush led by Chandler Jones and J.J. Watt.

“Even watching film from last year, some of those guys that are still there that were second-team guys, they can really rush the passer and they play really hard,” Lewan said. “I am excited to get out there. It is going to be a huge challenge for us Week One.”