Titans will need patience as they await Simmons' recovery 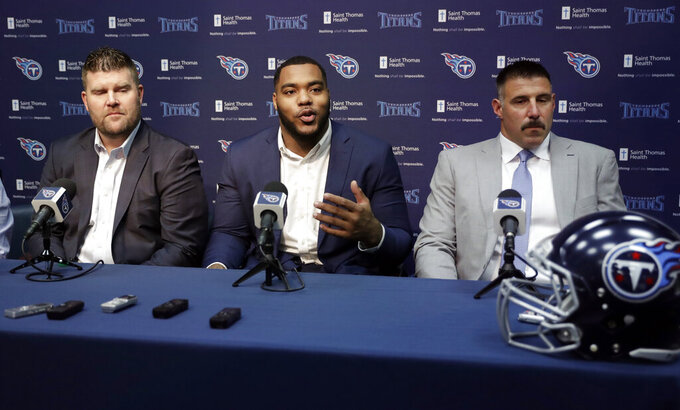 NASHVILLE, Tenn. (AP) — The Tennessee Titans will need to be patient with their first-round pick in the NFL draft. They used the rest of their selections on players who could fill holes and contribute right away.

Although the Titans have had three straight winning seasons for the first time since relocating from Houston to Tennessee in 1997, they're seeking to take the next step after missing the playoffs with a 9-7 record last year.

"I think we're a better football team today than we were when we started this thing off Thursday night," Titans general manager Jon Robinson said Saturday. "We got a bunch of guys who when I talked to them on the phone, they're extremely appreciative for the opportunity and they're hungry to get to Nashville and get to Nissan Stadium."

First-round pick Jeffery Simmons, the draft's 19th overall selection, doesn't know yet just when his opportunity to play might arrive.

The Mississippi State defensive tackle tore the anterior cruciate ligament in his left knee in February while preparing for the draft. The Titans haven't announced a timetable for his recovery.

"I'm going to attack the rehab," Simmons said. "Whenever that time comes for me to get on the field, to get out there and help the team win, I'm going to give it my all."

The Titans added players later in the draft who could make an immediate impact.

An offense lacking playmakers should get a boost from second-round pick A.J. Brown of Mississippi. Third-round pick Nate Davis of Charlotte could challenge for a starting guard spot.

The Titans traded up in the fourth round to take Iowa's Amani Hooker, who can play both safety and nickel while adding depth to the secondary. Hooker spent many of his college practices guarding Iowa's assembly line of NFL tight ends - a group that includes San Francisco's George Kittle, Detroit Lions first-round pick T.J. Hockenson and Denver Broncos first-round selection Noah Fant.

"They are getting a playmaker, a baller, a student of the game, a guy you don't have to worry about off the field," Hooker said. "I'm going to come into work every day, no complaining. It's a business now, and I'm ready to take it on and win some championships and Super Bowls."

Outside linebacker D'Andre Walker may be counted on more than the typical fifth-round pick because pass-rushing help is one of the Titans' greatest needs. Walker recorded 13 sacks for Georgia over the last two seasons.

The identity of the Titans' fifth-round selection was revealed on the Nashville stage by Tennessee State linebacker Christion Abercrombie, who grew up playing rec-league football with Walker in College Park, Georgia. Abercrombie underwent emergency surgery last fall after suffering a serious head injury in a game with Vanderbilt.

"It was a blessing that he got to announce my name," Walker said.

Hooker, Walker and sixth-round pick David Long Jr. all could contribute on special teams as well. Long, a linebacker from West Virginia, was the Big 12's defensive player of the year last season.

The Titans' first-round selection of Simmons was interesting not only because of his injury but also because of an arrest in his background. Simmons was arrested in 2016 following a fight in which he was seen on video punching a woman. He was found guilty of malicious mischief and pleaded no contest to a simple assault charge. The Titans decided Simmons' arrest wasn't enough to remove him from consideration.

Defensive tackle wasn't necessarily a huge need for a team that already has perennial Pro Bowl selection Jurrell Casey. But the Titans didn't want to pass up on Simmons, who likely would have gone much earlier if he hadn't injured his knee. The Titans wanted to give quarterback Marcus Mariota more weapons, and Brown should help in that regard. Davis fills a void at guard following the offseason departures of Josh Kline and Quinton Spain.

The Titans still could use some pass-rushing help. They waited until the fifth round to draft an edge rusher after the offseason retirement of outside linebacker Brian Orakpo, though Walker could prove to be a bargain. Walker underwent sports hernia surgery earlier this year but says he's feeling better. Tennessee did sign 37-year-old Cameron Wake away from the Miami Dolphins last month.