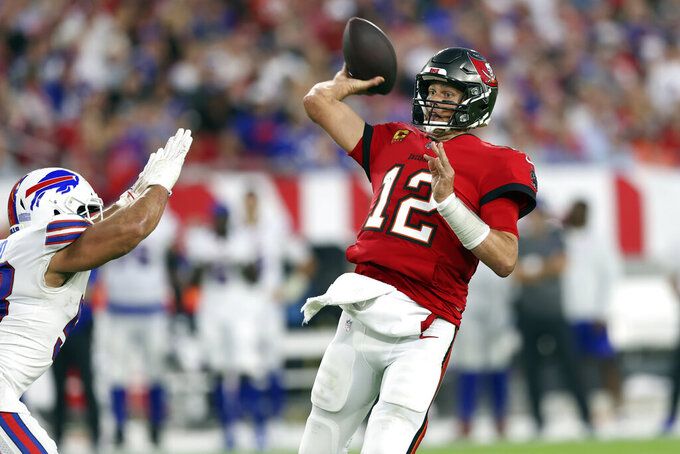 Tampa Bay Buccaneers quarterback Tom Brady (12) throws a pass to wide receiver Mike Evans during the first half of an NFL football game against the Buffalo Bills Sunday, Dec. 12, 2021, in Tampa, Fla. The reception moved Brady past former Saints quarterback Drew Brees for the most completions in NFL history. (AP Photo/Mark LoMoglio)

Brady threw his 700th career touchdown pass in the regular season and playoffs with a 58-yarder to Breshad Perriman in overtime on Sunday that gave Tampa Bay a 33-27 win over the Buffalo Bills.

Brady's second career overtime TD pass improved his career record against the Bills to 32-3, for the most wins in the regular season and playoffs by one quarterback against an opponent. Next on the list is Brady's 30 wins over the Jets, followed by Brett Favre's 28 wins against the Lions.

Earlier in the game against the Bills, Brady ran for a 1-yard score, giving him his 10th touchdown since turning 40 and tying Jerry Rice for the most in NFL history.

Brady has rushed for nearly half of all the TDs by players in their 40s, with everyone else combining for 11, led by Doug Flutie's four.

Brady reached the 4,000-yard passing mark for the 13th time, one shy of Peyton Manning's record. Brady leads the NFL with 4,134 yards passing this season and can break his own mark as the oldest player to accomplish that feat.

Brady set the mark when he led the league in yards passing at age 40 in 2017, surpassing Hall of Famer Fran Tarkenton, who was 38 when he did it in 1978 in the final year of his career.

Justin Herbert of the Los Angeles Chargers became the first player in NFL history to throw for at least 30 TDs passes in each of his first two seasons when he threw for three scores in a 37-21 win over the Giants.

Earlier against the Giants, Herbert threw a 59-yard strike to Jalen Guyton that traveled 63.8 yards in the air, according to NFL NextGen stats. That's the second-longest throw on a completion pass this season and the 10th pass in Herbert's career that traveled at least 55 yards in the air, the most in the NFL since the start of last season.

The Vikings have played 10 straight games decided by eight points or fewer after beating Pittsburgh 36-28 last Thursday. That's two games shy of tying the longest streak in NFL history, shared by the 2015 Ravens and 1989 Chargers.

Minnesota also became the 15th team in the Super Bowl era to take a lead of at least six points in each of the first 13 games of the season. The Vikings have only managed a 6-7 record despite that, while 13 of the other 14 teams won at least 10 games.

The 1991 Saints (9-4) had the worst record of that group before the Viking,s as those 14 teams combined for an .852 winning percentage.

The Bears and Packers played a second quarter unlike any other in NFL history.

The teams combined for six touchdowns, one field goal and 45 points in the highest-scoring quarter in the storied history of the rivalry.

But the big plays went beyond that. Five of the six touchdowns came on plays of more than 35 yards, the first time in NFL records dating to 1925 that happened in a quarter.

Jakeem Grant scored on a 46-yard catch and a Bears record 97-yard punt return, Damiere Byrd had a 54-yard TD catch for Chicago, Rasul Douglas returned an interception 55 yards for a TD and Aaron Rodgers threw a 38-yard touchdown pass to Davante Adams.

Grant's punt return TD was the first in the NFL this season. This is the first time in the Super Bowl era no team returned a punt for a score in the first 13 weeks.

In one week, the NFL doubled the number of successful onside kicks for the season.

Arizona, Chicago, Baltimore and the Giants all pulled off the feat in the fourth quarter of their games, although none were able to turn those into wins.

There had been four successful onside kicks the first 13 weeks of the season, including a surprise one by Detroit against the Rams in Week 7.

This marked just the fourth time since 1991 that there were four successful onside kick recoveries in the same week, according to Sportradar, with the last time coming in Week 13 of the 2019 season.

This was the first time that all four came in the fourth quarter when teams knew they were coming.