Tomlin: Brawl vs. Browns “ugly for the game of football” 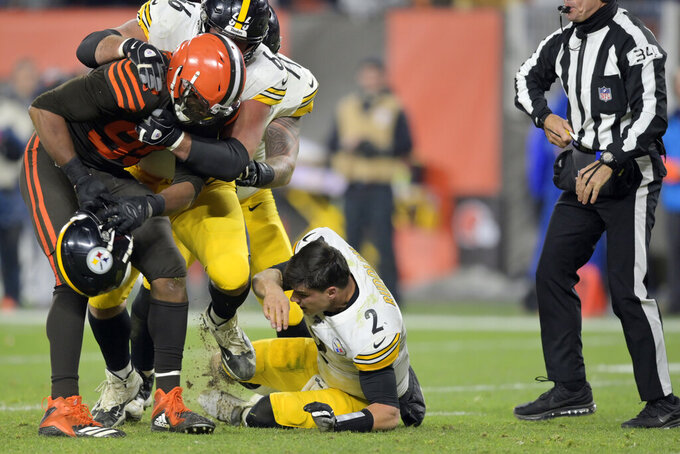 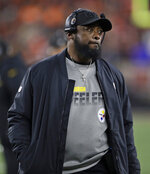 Just don’t expect Tomlin to use the video of a brawl he called “ugly for the game of football” as a teachable moment. He doesn’t think one is required.

“I don't know that we did anything to make it happen in the first place,” Tomlin said Tuesday. “That's why I said we didn't have anything to learn from it."

Garrett and Rudolph became tangled up after Garrett took Rudolph to the ground shortly after the quarterback let go of a pass in the final seconds of Cleveland’s 21-7 win.

“All of us that are involved in the game, particularly at this level, want to safeguard and protect the game, it’s integrity,” Tomlin said. “And in that instance, it was compromised, obviously with an unfortunate incident. None of us want those things to transpire. It did. We were a part of it. We accept responsibility of our actions within it."

Garrett received an indefinite suspension from the NFL, which also fined both teams $250,000. Steelers center Maurkice Pouncey earned a three-game ban for punching and kicking at Garrett in the aftermath and Browns defensive tackle Larry Ogunjobi was suspended one game for knocking down Rudolph from behind.

All three players are appealing the respective rulings and with the AFC North rivals meeting again in less than two weeks, the debate over who’s to blame for what isn’t likely to die down anytime soon.

Outside of owning up to his team’s actions and hinting the Browns started it, Tomlin declined to get into detail, saying only “we have some people going through appeals and so forth, I don't want to jeopardize that in any way."

More pressing for Tomlin than trying to assess blame is finding a way to get Pittsburgh (5-5) back on track following its worst performance since a season-opening 30-point loss to New England.

While the outside world fixated on the unprecedented punishment handed out by the league, Tomlin was more focused on the 59 minutes and 52 seconds that came before things got out of hand. Long before Garrett and Rudolph went at it, the Browns had beat up and beaten down the Steelers.

“It's easy to seek comfort in that sidebar distraction and not talk about what really needs to be talked about from our perspective, is that we played a losing football game,” Tomlin said. “We didn't execute well enough in all three phases to secure victory."

Pittsburgh will try to stay in the playoff mix on Sunday at winless Cincinnati (0-10) but will likely do it without Pouncey, wide receiver JuJu Smith-Schuster and running back James Conner. The odds of Pouncey’s suspension being lifted completely are slim. Smith-Schuster is dealing with a concussion and Conner aggravated the shoulder injury that forced him to miss two games last month.

Rookie running back Benny Snell Jr. could return after missing a month with a knee injury, but even if he’s able to play Pittsburgh’s skill position group remains a mish-mash of players, most of whom began the season far down the depth chart either with the Steelers or elsewhere. Pittsburgh signed rookie wide receiver Deon Cain and rookie running back Kerrith Whyte Jr. — both practice squad players with other teams — to the 53-man roster earlier this week. There’s a chance one or both could be on the field Sunday.

“The bottom line is our jobs is to win games regardless of circumstance and so that's our focus,” Tomlin said. “I really don't spend a lot of time crying over who's available or who's not available. It's as much a part of the game as blocking and tackling. If you're a competitor like we as coaches are competitors, that fires you up. You want to smile in the face of adversity and deliver and so that's our focus."