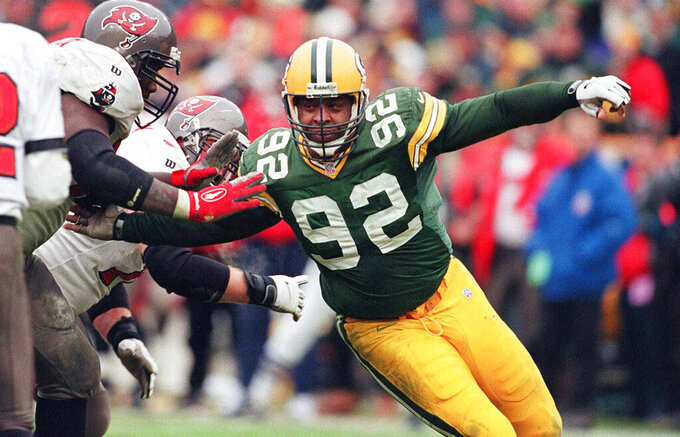 FILE - In this Jan. 4, 1998, file photo, Green Bay Packers Reggie White moves in on the Tampa Bay defense in the NFC Divisional Playoff game in Green Bay, Wis. The NFL wouldn't be the gigantic force it is in society and sports today without free agency empowering most players with freedom and fortune and endowing most long-suffering franchises and their fans with hope. The first offseason featuring modern free agency was in 1993, and it produced the most significant free agent signing in NFL history: Reggie White (AP Photo/Charles Krupa, File)

A look at the most impactful football free agents of all time:

White stunned the NFL by choosing Green Bay after a whirlwind tour in the first offseason of unfettered free agency. His arrival at age 32 signaled a new era for the Packers, who hadn't found much success since the Vince Lombardi teams of the 1960s. White teamed with Brett Favre for a long run of success that included a win over the Patriots in Super Bowl 31. He was enshrined in the Pro Football Hall of Fame in 2006.

Manning was coming off neck fusion surgery that sidelined him in 2011 when the Colts released him so they could turn their team over to rookie Andrew Luck. Despite the uncertainty over his health, Manning was courted by several teams and chose the Broncos. He set numerous passing records in Denver and led the Broncos to two Super Bowls, losing to the Seahawks in 2014 but beating the Panthers two years later in the final game of his storied career.

Brees hit the open market at age 27 after he sustained a serious injury to his throwing shoulder in the 2005 season finale. The Chargers turned to Philip Rivers, whom they had acquired in a draft-day trade in 2004, and Brees became the rare young QB to get to test free agency. He chose New Orleans, which itself was making a comeback from Hurricane Katrina. The Saints won their only Super Bowl in 2010, over the Colts. Last season, Brees surpassed Favre for most career completions.

After five seasons with the Atlanta Falcons, Sanders went to San Francisco and helped the 49ers win the Super Bowl over the San Diego Chargers. Then he promptly left for Dallas in 1995 and helped lead the Cowboys to a Super Bowl victory over the Pittsburgh Steelers. Also a "prime time" kick returner, his stay in Dallas also included three first-team All-Pro honors, and Sanders was inducted into the Pro Football Hall of Fame in 2011.

After winning back-to-back Super Bowl rings in Denver, Sharpe went to the Ravens and promptly won another. He had a 96-yard touchdown catch in the AFC championship game. In his two seasons in Baltimore, Sharpe broke tight end records for career catches, yards and touchdowns, all marks that were previously held by the man who signed him, ex-Ravens general manager Ozzie Newsome. Sharpe was inducted into the Pro Football Hall of Fame in 2011.

Woodson was considered one of the biggest risks to hit the open market because he hadn't played a full season in four years and only played in six games during his final season in Oakland. The Packers were his only suitors and he rewarded them with a career comeback that included NFL Defensive Player of the Year honors in 2009 and a Super Bowl ring after the 2010 season.

Not only did Warner go from grocery clerk to NFL MVP and Super Bowl champ while orchestrating the "Greatest Show on Turf" in St. Louis, he had another career comeback in him with the Cardinals. After starting 3-12 in Arizona and getting benched for Matt Leinart, he won back his starting job and led the Cardinals to an improbable appearance in Super Bowl 43, where they lost 27-23 to the Steelers. Enshrined in the Hall of Fame in 2017.

Not much was expected of the 34-year-old journeyman when he joined a middling Raiders team and its young head coach, Jon Gruden. But Gannon flourished with his fourth NFL team, making four consecutive Pro Bowls, two All-Pro teams and three trips to the playoffs. He was the league's MVP in 2002 at age 37 and led the Raiders to Super Bowl 37 against Tampa Bay.

Although he was in the twilight of his incredible career when crossed the bay at age 39, Rice posted two more 1,000-yard receiving seasons after leaving the 49ers, finishing with an NFL record 14 such years. The Raiders' last taste of glory came with Rice. In 2001, they lost the infamous "Tuck Rule" game against Tom Brady and the Patriots, and a year later they made it to the Super Bowl, where they lost to Tampa Bay.

The only player to score 1,000 points with two franchises, Vinatieri won three Super Bowls in his decade in New England, then another in Indy. The 46-year-old kicker is the NFL's oldest active player. Last season, he broke Morten Andersen's league record for field goals made and now has 690. He's the league's all-time scoring leader with 2,600 points and his 32 career playoff games are second behind former teammate Tom Brady.

A special category for this one because Martin was a restricted free agent. In his second season as Jets coach, Bill Parcells stunned the NFL when he signed his former franchise running back in New England away from the Patriots with a $36 million deal, parting with first- and third-round draft picks. Martin helped the Jets reach the AFC championship in his first season in New York and won the NFL rushing title in 2004 at age 31. Enshrined in the Hall of Fame in 2012.