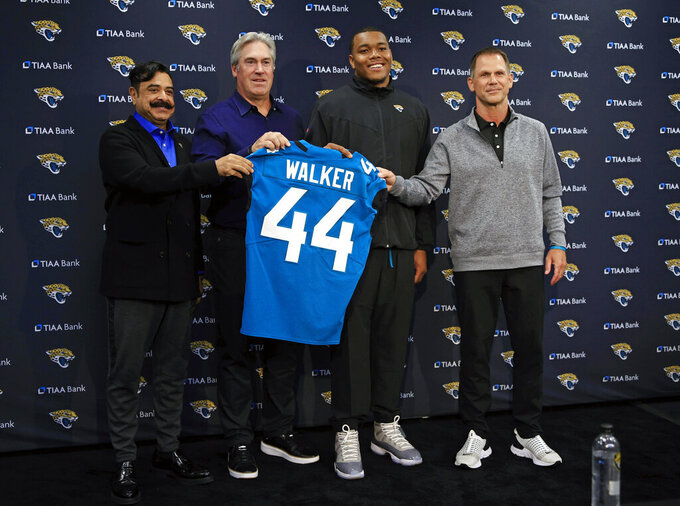 Walker's contract is fully guaranteed and includes a team option for a fifth year, both standard for NFL first-round picks. He signed it one day before the Jaguars begin a rookie minicamp.

Fellow first-rounder Devin Lloyd, the 27th overall selection, also signed his rookie deal. He gets a four-year contract worth $12.9 million and a $6.6 million signing bonus.

Jacksonville signed five of its seven draft picks in all, including running back Snoop Conner (fifth round), cornerback Gregory Junior (seventh) and cornerback Montaric Brown (seventh).

Walker and Lloyd are among a dozen first-rounders from the 2022 draft under contract, including four of the first six selections. Walker will count $6.8 million against the team's salary cap this fall.

The Jaguars chose the 6-foot-5, 272-pound Georgia native over Michigan star Aidan Hutchinson, who set a school record with 14 sacks in 2021 and finished second in Heisman Trophy voting. The team later added Lloyd and Muma in hopes of improving a defense that ranked 20th in the league in yards allowed in 2021 and gave up nearly 27 points a game.

Picking Walker, though, wasn’t nearly the slam dunk that drafting quarterback Trevor Lawrence at No. 1 was a year ago. Critics argued that Hutchinson was the more polished product and pointed to Walker’s limited college numbers. He had 9½ sacks in three years in Athens, including six during last season’s national championship run.

But Jaguars general manager Trent Baalke and coach Doug Pederson see a more versatile player in Walker, who logged snaps at defensive end, defensive tackle and outside linebacker in Georgia’s vaunted defense last fall. His highlights include more than sacks; he stops the run, tackles speedy receivers in the open field and tips passes that lead to interceptions.

He bided his time as a backup for two years with the Bulldogs and started to blossom as a junior. He started all 15 games in 2021, finishing with 37 tackles, including 7½ for a loss, and two pass breakups.

The Jaguars plan to take it slow with Walker, letting him learn the outside linebacker position before shuffling him to other spots along the defensive front.