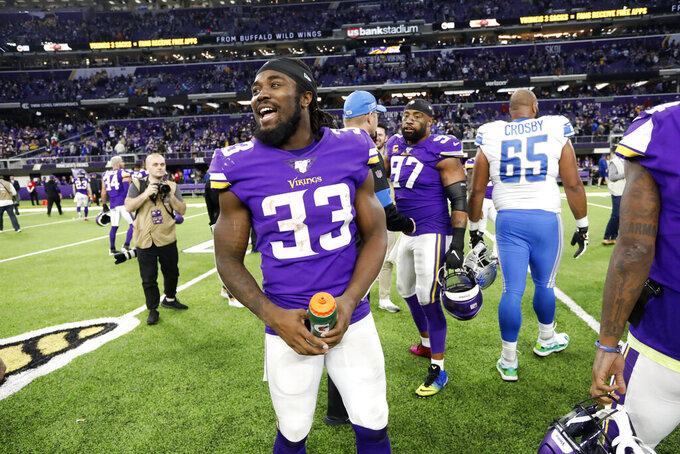 Minnesota Vikings running back Dalvin Cook (33) walks off the field after an NFL football game against the Detroit Lions, Sunday, Dec. 8, 2019, in Minneapolis. The Vikings won 20-7. (AP Photo/Bruce Kluckhohn)

The best running teams are winning far more often this season and the most prolific passing teams are losing much more.

Here's the combined record and winning percentage for the five top rushing teams since 2015:

Here's the combined record and winning percentage for the five top passing teams since 2015:

Ravens quarterback Lamar Jackson is 23 yards away from breaking Michael Vick's single-season record for quarterbacks. Vick had 1,039 in 2006.

Broncos quarterback Drew Lock became the first rookie in the Super Bowl era to pass for at least 300 yards and three touchdowns in his first road start in Denver's 38-24 win at Houston.

Broncos running back Phillip Lindsay is the third undrafted player with at least 1,000 scrimmage yards in each of his first two seasons since 1967.

49ers wide receiver Emmanuel Sanders had seven receptions for 157 yards and a touchdown and threw a 35-yard touchdown pass in San Francisco's 48-46 win at New Orleans. Sanders joined Walter Payton, LaDainian Tomlinson and Odell Beckham Jr. as the only non-quarterbacks since 1970 to have a TD catch and TD pass in multiple games in their career.

Drew Brees and Tom Brady are closing in on Peyton Manning's career record for TD passes. Manning had 539. Brees has 537. Brady has 536. Brees last week threw five TD passes for the 11th time in his career.

Titans quarterback Ryan Tannehill completed 21 of 27 passes (77.8%) for 391 yards and three touchdowns with one interception for a 140.4 passer rating in the Tennessee's 42-21 win at Oakland. Tannehill joined Aaron Rodgers as the only players to complete at least 75% of their passes with a passer rating of 130 or higher in three consecutive games in a single season in league history.

Buccaneers quarterback Jameis Winston became the third quarterback in NFL history to throw for 450 yards and four TDs and run for a score in the same game. Norm Van Brocklin did it in 1951 and Billy Volek did so in 2004.

Falcons quarterback Matt Ryan reached 50,000 yards passing in his 186th career game. Only Drew Brees did it faster, in 183 games.

Redskins running back Adrian Peterson joined Walter Payton and Emmitt Smith as the only players with 14,000 yards rushing and 100 rushing TDs.