Torrid Ravens get jump on Giants, roll to easy 27-13 victory 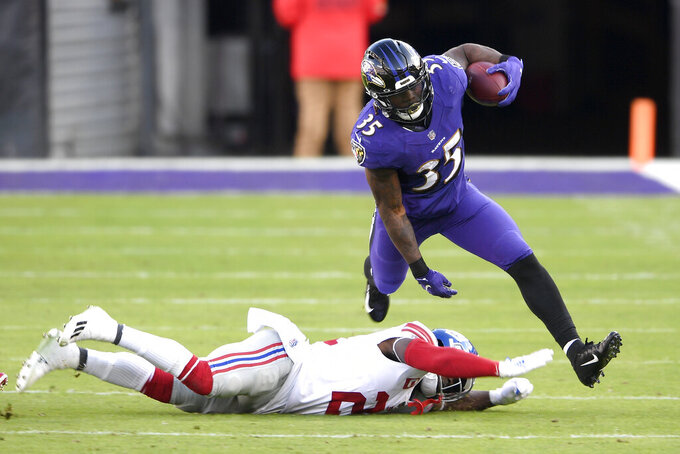 BALTIMORE (AP) — A very difficult football season for the Baltimore Ravens took a positive turn during a wonderful afternoon that started in exceptional fashion and ended with an ideal combination of events.

Lamar Jackson directed four scoring drives during the decisive first half, and the surging Ravens beat the New York Giants 27-13 Sunday to gain control of their own fate in the AFC playoff chase.

Soon after Baltimore’s fourth straight victory, Pittsburgh put the finishing touch on a win over Indianapolis and the New York Jets completed their upset of Cleveland.

That thrust the Ravens (10-5) past the Colts and Browns in the AFC wild-card hunt, which means Baltimore will earn a playoff berth for the third year in a row by winning at Cincinnati next week.

“I was watching the scoreboard the whole game,” Ravens tight end Mark Andrews said. “Obviously, that’s good for us. Hopefully we take advantage of that.”

It’s been a rough go for the Ravens, who last month dealt with an outbreak of COVID-19 that sidelined Jackson during a three-game skid that left Baltimore needing help to qualify for the postseason.

That aid arrived in earnest on Sunday.

The Giants (5-10), meanwhile, lost their third straight and walked off the field with only a miniscule chance of making the postseason.

“We just have to execute fundamentally better,” first-year coach Joe Judge said. “We’ve got to do some things earlier in the game as coaches and players to start faster.”

Jackson guided the Ravens to touchdowns on their first two possessions, then took them into field-goal position on his next two drives for a 20-3 halftime lead.

That was more than enough to defeat a struggling Giants team that totaled only 13 points in its previous two games and has scored just two touchdowns over the past three weeks.

Daniel Jones started at quarterback for New York after missing two of the past three games with hamstring and ankle injuries. His passing numbers — 24 for 41 for 252 yards — were reflective of the heavy pressure he received from Baltimore’s relentless rush.

The Ravens had six sacks, and Jones was flushed out of the pocket on several other occasions.

“They deserve credit,” Jones said of the Ravens. “They were pressuring and found different ways to bring it. I got to do a better job of seeing it and getting (the ball) out in those situations.”

Jackson, the reigning NFL MVP, completed 17 of 26 passes for 183 yards and two touchdowns. He also ran for 80 yards as part of a rushing attack that eclipsed 100 yards for the 38th consecutive game.

Gus Edwards rushed for 85 yards and rookie J.K. Dobbins gained 77 yards on the ground before leaving with a chest injury.

The Ravens opened the game with an 82-yard drive that consumed more than eight minutes and ended with a 6-yard touchdown pass from Jackson to Marquise Brown.

“It was important,” coach John Harbaugh said. “I know they’ve got a good defense. For us to take the ball down the field was very good execution. Lamar was really on point and different guys made plays.”

“It’s frustrating. We got to get off to a better start,” said receiver Sterling Shepard, who scored New York’s lone touchdown with a fourth-quarter catch. “We’re not the team that can afford to get off to a start like that, especially against a team like Baltimore.”

The Ravens went up 14-0 by moving 65 yards in 10 plays, capped by a 2-yard touchdown run by Dobbins — his fifth straight game with a score.

For an encore, Jackson directed a 13-play drive that chewed up another eight-plus minutes before Justin Tucker kicked a short field goal for a 17-0 lead.

The Ravens cruised through the second half, taking a 27-6 lead early in the fourth quarter on an 8-yard touchdown catch by Dez Bryant.

Giants K Graham Gano tied a franchise record with his 29th consecutive successful field goal try. ... Jackson is 10-0 lifetime as a starter against NFC teams. ... Baltimore is 13-2 in December since the start of the 2018 season, and Jackson is 12-1 in the month with 11 straight wins.

Giants offensive coordinator Jason Garrett was released from COVID-19 protocol Saturday and took the train to Baltimore with the team. After missing last week’s game, Garrett watched from the sideline while the Giants tried to get back on track following a stretch in which they scored one touchdown in two games.

Giants: WR Golden Tate was inactive with a calf injury.

The Giants close the regular season at home against Dallas on Sunday.

The Ravens head to Cincinnati on Sunday looking to complete a sweep of the Bengals, who they beat 27-3 in October.