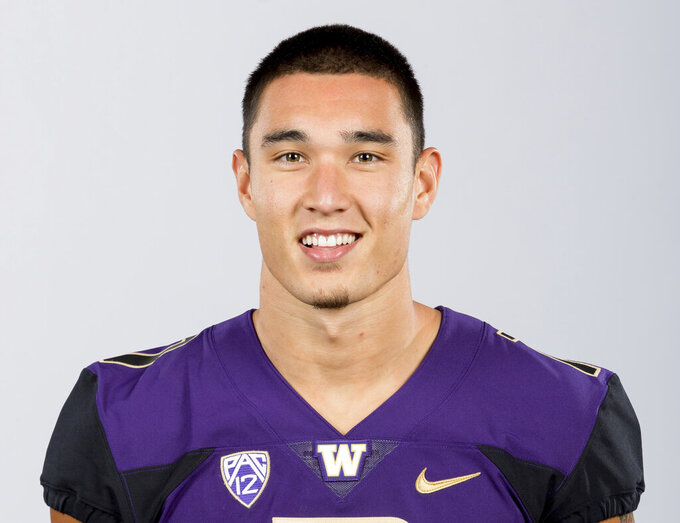 THOUSAND OAKS, Calif. (AP) — The Los Angeles Rams traded back three times and moved up twice in the first two days of the NFL draft. The NFC champions came out of all their machinations with a promising safety, a hometown cornerback and a ball carrier to provide a change of pace from Todd Gurley.

The Rams traded their first-round pick Thursday and moved back two more times Friday before they finally selected Washington safety Taylor Rapp with the 61st overall pick late in the second round.

Los Angeles then used one of the two extra picks acquired during its trades to move up for Memphis running back Darrell Henderson early in the third round. The Rams added Michigan cornerback David Long, a product of LA's Loyola High School, later in the third, before moving up one last time to grab Oklahoma offensive tackle Bobby Evans shortly before the end of the third.

The most eye-catching pick was Henderson, a highly productive ball carrier who finished second in the FBS with 1,446 yards rushing last season despite getting just 158 carries, the 39th-most in the FBS. The explosive runner was among the top handful of running backs in the draft, but slipped to the third round.

"Yeah, I thought I was going to go higher," Henderson said. "But I just kept my faith. When it's time to put on the pads, I'm going to make everybody that passed over me regret it."

Coach Sean McVay and general manager Les Snead both said they chose Henderson for his particular abilities as a change-of-pace back who could also line up as a receiver. The ever-inventive McVay has ideas about how to use Henderson, comparing him to New England's James White.

"Sean has always felt like his offense would be slightly more explosive when you have a change-of-pace type running back," Snead said. "We thought about doing it in last year's draft ... (but) it's something that we've been trying to do since Sean walked in."

And while neither McVay nor Snead emphasized it, choosing Henderson likely means the Rams won't have to rely so heavily on Gurley, whose production slumped after he developed a mysterious left knee injury down the stretch last season.

Henderson provides a compelling alternative to overloading Gurley, who got $45 million guaranteed in his new contract before training camp last year. Gurley has been in the top 10 in the NFL in touches during each of his four seasons, and he was fourth last season — despite missing two games in December — after being third in 2017, when he won the NFL Offensive Player of the Year award.

Although he insisted his left knee was healthy late last season, the Rams relied heavily on veteran C.J. Anderson, who left for Detroit as a free agent. Gurley had fewer than 50 yards rushing in four of his final five games.

"Being able to add a playmaker is the biggest thing," McVay said. "We had identified (Henderson) as a guy that has a specific skill set that could do some really unique things for us offensively. ... The versatility that he provides is what was so enticing for us. You see the explosiveness — over 8 yards a carry. We're excited for him to get in here and really learn under Todd and (backup running back) Malcolm (Brown)."

Rapp is the Rams' highest-drafted defensive player since 2014. They hadn't drafted a defensive player higher than 91st overall since then, but Rapp will join returning starter John Johnson and newcomer Eric Weddle in the secondary.

Rapp wasn't surprised to hear from the Rams after making a pre-draft visit to their training complex.

"When I first got there, I could tell right away that it's the perfect place for me," said Rapp, a second-team AP All-America selection last season for the Pac-12 champion Huskies. "The culture is just so unique, and the way things are done around there is just so unique and so great. I just knew I would be a perfect fit."

Long was excited to land back in Los Angeles after a three-year career with the Wolverines. He also visited with the Rams prior to the draft, getting a productive meeting with cornerbacks coach Aubrey Pleasant.

The 6-foot-5 Evans said he "fell in love" with the Rams on his pre-draft visit. He could emerge as an important backup at four positions on an offensive line that lost two starters from its Super Bowl lineup when guard Rodger Saffold signed with Tennessee and center John Sullivan's contract option wasn't picked up.