Treadwell being 'showcased' as Vikings search for receivers 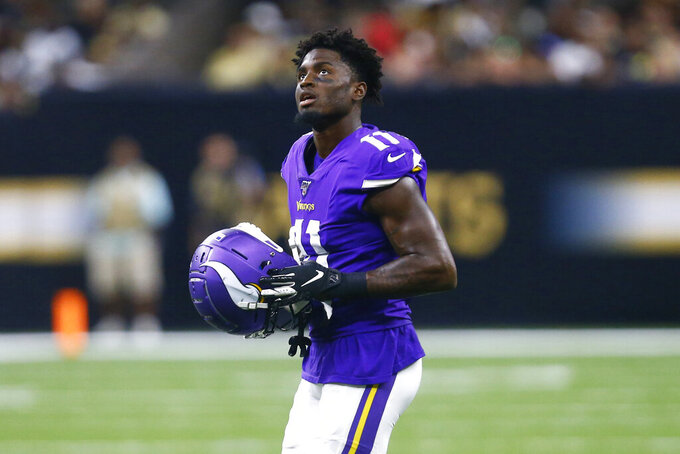 FILE - In this Aug. 9, 2019, file photo, Minnesota Vikings wide receiver Laquon Treadwell (11) walks on the field in the second half of an NFL preseason football game against the New Orleans Saints in New Orleans. Treadwell is likely closing in on the end of his lackluster tenure with the Vikings, three years after they drafted the wide receiver in the first round. (AP Photo/Butch Dill, File)

EAGAN, Minn. (AP) — Being a first-round draft pick, Laquon Treadwell has received several opportunities to secure a role in the Minnesota Vikings' offense.

His next chance might come with a new team.

Minnesota is still left searching for a reliable option for the third receiver spot behind Stefon Diggs and Adam Thielen.

"They're hard to separate right now," Vikings coach Mike Zimmer said of the backup receivers. "When we talk about it in the personnel meetings, it's things like that. One guy has a good day, then he has a bad day. The consistency of what they're trying to do is really hard to get a handle on. That's why I say these special teams, they need to get their rear ends going on that."

Treadwell's spot in the competition has seemed more afterthought than expectation this year. He is behind second-year, undrafted Chad Beebe on the depth chart and his spot on the roster became even more unsettled after Zimmer's comments following Sunday's second preseason game. Treadwell caught all four of his targets for 47 yards.

"We're trying to get Treadwell the ball a little bit more in the second half," Zimmer said after the game. "Try to showcase him a little bit, I guess. He made some nice plays."

The nice plays have been few and far between in three seasons for Treadwell. He has 56 NFL catches for 517 yards and one touchdown, while being plagued by drops.

It was no surprise this spring when Minnesota declined the fifth-year option on Treadwell's contract.

"I would love to be here," Treadwell said this week. "I wouldn't want to be nowhere else."

Hoping to stay, Treadwell said he's changed his outlook and is only focused on "winning."

"That's my mindset and it keeps things simple," Treadwell said. "I don't have to read the media. I don't have to pay attention to depth charts, none of that. They call my name to go in, if I win, everything else will take care of itself."

Beebe, who's also been holding for field goals at times, appears to have a job. He had four catches for the Vikings last season.

Former Canadian Football League standout Brandon Zylstra, who had one catch in the regular season last year, has recovered from an offseason injury and had five catches for 37 yards and a touchdown in Sunday's game.

"I think the explosiveness is starting to come back a little bit for him now," Zimmer said. "I thought he did well (Sunday)."

Former Denver Broncos receiver Jordan Taylor has been in the mix this summer. Minnesota drafted two receivers in the seventh round of this year's draft, Olabisi Johnson and Dillon Mitchell, and also brought back speedy Jeff Badet after a year on the practice squad.

Special teams work will play a deciding role, and Zimmer also mentioned the eventual backups could come from another NFL roster.

Meanwhile, Treadwell doesn't mind being showcased for a chance to make any NFL roster.

"I hope I'll just get showcased more." Treadwell said. "That's what you want in this league, just to be able to go out and show what you can do. The more they show me, the more I'll do. The opportunities I get, try to make the most of my opportunities and let the rest take care of itself."