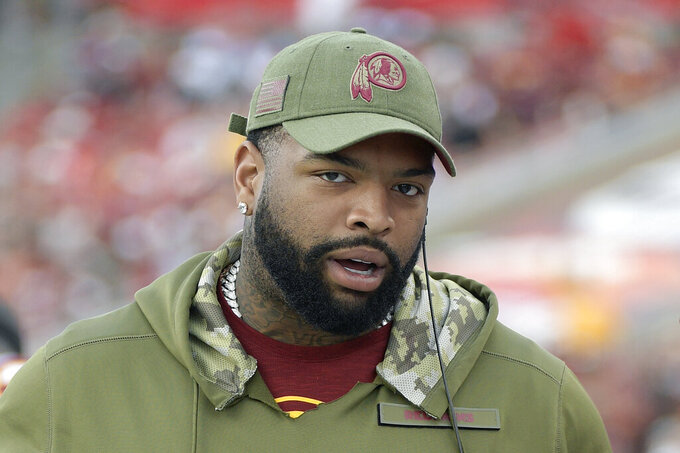 FILE - In this Nov. 11, 2018, file photo, Washington Redskins offensive tackle Trent Williams is shown on the sideline during the second half of an NFL football game against the Tampa Bay Buccaneers, in Tampa, Fla. After sitting out last season in a dispute in Washington, seven-time Pro Bowl left tackle Trent Williams is excited to start over in San Francisco. (AP Photo/Phelan M. Ebenhack, File)

After spending all last season on the sideline in a dispute with management in Washington, Trent Williams couldn’t have scripted a much better outcome to this saga.

Williams left what has been one of the NFL’s most dysfunctional franchises in recent years to join one fresh off a Super Bowl trip in San Francisco where he has been reunited with coach Kyle Shanahan after spending four years together in Washington.

“I just want to get on the field, man. I can’t lie,” Williams said Thursday. “I’ve been chomping at the bit for some time. I’ve had my roller coaster of emotions because I did go back (to Washington) at the trade deadline. I was getting ready to play. I got that adrenaline dump. Now I’m chomping at the bit to able to get on the field with a Super Bowl-caliber team. That’s all I can think about right now.”

Williams will still have to wait for that chance after being acquired during the draft for a 2020 fifth-round pick and a 2021 third-rounder.

Most of the offseason is on hold for now in response to the COVID-19 pandemic with teams limited to virtual meetings as opposed to in-person installations and workouts. He is spending this time working out in Houston at a gym he owns with Adrian Peterson.

But when Williams is allowed to start practicing for real with his new team, he anticipates an easy transition because he still is a perfect fit for Shanahan’s offense 10 years after being picked fourth overall by the Redskins to play in it.

“The reason I was drafted to Washington is the way me and this offense marry up with my skill set,” he said. “That’s still the same. It’s a hand and glove fit. I know this offense like the back of my hand.”

Williams was no longer a good fit in Washington despite making the Pro Bowl every season from 2012 to 2018 as one of the game’s most athletic and dependable left tackles.

He sat out the entire 2019 season because of a dispute with Washington’s front office. The Redskins weren’t able to get the compensation they wanted at last year’s trade deadline and kept Williams. He renewed his request for a trade this offseason and was finally dealt last weekend.

In November, Williams revealed he had cancer and said that situation led him to distrust the Redskins’ medical staff and organization as a whole. He said at the time "there’s no trust there” with President Bruce Allen, who was fired after Washington’s 3-13 season.

The medical staff also was overhauled, and new coach Ron Rivera took control of football operations. But Williams still wanted out and got his wish granted.

Now he feels refreshed at age 31 after sitting out a year.

“I feel like I’m 25 again,” he said. “It’s my first year off of football since the second grade. It’s like 25 years of straight football every August. My body has had a chance to rest, a chance to heal. I don’t know if I’ve ever been in a position where I don’t feel an ache or a pain in the offseason. I feel rejuvenated to say the least.”

Williams is entering the final year of his contract, which will pay him $12.5 million this season.

A potential deal to Minnesota during the draft fell through in part because Williams and the Vikings didn’t see eye to eye on long-term plans.

The Niners then pounced and found the perfect replacement for six-time Pro Bowler Joe Staley, who had informed the team before the draft that he planned to retire because of a deteriorating neck condition.

Williams and 49ers general manager John Lynch have both said there’s no rush to get a deal done to lock up Williams beyond 2020.

“We both agreed that we can just take a wait-and-see approach,” Williams said. “It’s the last year of my deal. Obviously, it’s an incentive for me to play well. They had to give up a third-round (pick) next year, so they’re invested in the deal as well. Both parties are interested in something long term but I’m more than OK with just getting my feet wet and just playing it out.”