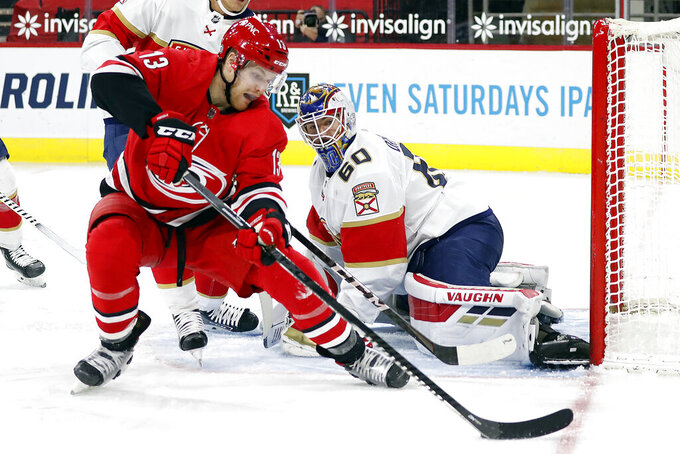 Carolina Hurricanes' Warren Foegele (13) tries to control the puck and shoot it at Florida Panthers' goaltender Chris Driedger (60) during the second period of an NHL hockey game in Raleigh, N.C., Sunday, March 7, 2021. (AP Photo/Karl B DeBlaker) 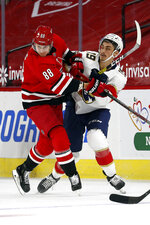 RALEIGH, N.C. (AP) — Vincent Trocheck and James Reimer continued to torment their former team, lifting the Carolina Hurricanes to their fifth straight victory with a 4-2 win over the Florida Panthers on Sunday night.

Trocheck, who was traded to Carolina just over a year ago, scored for the fourth time this season against the Panthers. Nino Niederreiter, Sebastian Aho and Warren Foegele also had goals for the Hurricanes, who have won eight of 10 home games (8-1-1) this season.

Reimer, who made 21 saves, came to Carolina less two years in ago in a trade from Florida. He’s 3-0-0 since then against the Panthers.

MacKenzie Weegar and Mason Marchment scored for Florida, which had a five-game points streak snapped. Chris Dreidger made 22 saves for the Panthers.

Trocheck scored just eight seconds into the Hurricanes’ first power play of the game. At that point with 4:05 to play in the opening period, Carolina had as many goals as the Panthers did shots on goal.

Niederreiter took a pass from Martin Necas and beat Dreidger, who had been under siege early in the second period. Niederreiter has 11 goals, posting at least one against every Central Division team except for Tampa Bay.

The Panthers got on the scoreboard when Weegar blasted the puck between Reimer’s pads with 9:19 left in the second period.

Aho posted the team’s second short-handed goal of the season 38 seconds into the third period. Foegele extended the lead to 4-1 slightly more than three minutes later.

Florida won 6-2 at Nashville on Saturday, while the Hurricanes hadn’t played since Thursday night.

Panthers defenseman Keith Yandle appeared in his 1,000th career game. He’s in his 15th season in the league and his fourth season with the Panthers.

His accomplishment was recognized with an announcement during a break in the first period.

Yandle has played 890 consecutive games for the longest active streak in the league and the third-longest stretch in NHL history.

Trocheck has scored in each of Carolina's four matchups with Florida this season.

He’s the first player in the Carolina (and former Hartford) organization to score in his first four games against his ex-team following a trade since the NHL began tracking that information in 1991-92.

Trocheck, who has a goal in four of the last five games, has a team-leading 13 goals this season. Florida doesn’t have a player with a double-digit goal total.

Hurricanes winger Teuvo Teravainen missed the game for undisclosed reasons. He had returned from a seven-game absence because of a concussion to play Thursday night in a victory against Detroit. He logged 14½ minutes in that game.

Panthers: Play at Columbus on Tuesday and Thursday.

Hurricanes: Stay home for games Tuesday and Thursday vs. Nashville.