Trubisky gets fresh start as backup QB in Buffalo 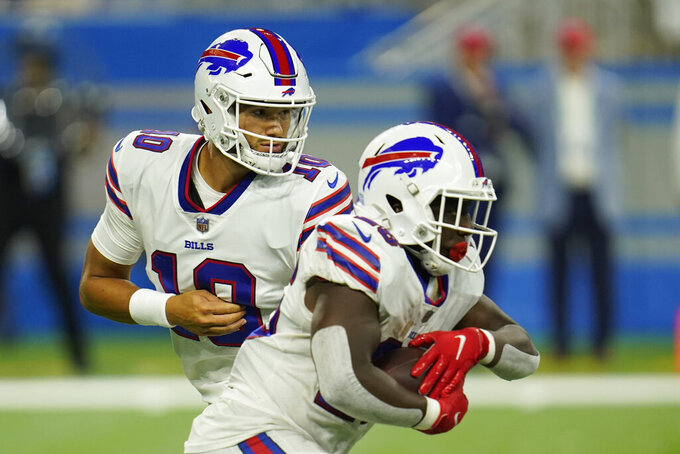 Buffalo Bills quarterback Mitchell Trubisky (10) hands off to running back Devin Singletary during the first half of a preseason NFL football game against the Detroit Lions, Friday, Aug. 13, 2021, in Detroit. (AP Photo/Paul Sancya)

No longer wanted in Chicago, Mitchell Trubisky isn’t dwelling on his past.

He’s also not looking too far into the future, when he could get another chance to compete for a starting quarterback job in the NFL.

For now, Trubisky is settling into his new role as the No. 2 quarterback in Buffalo behind Josh Allen, which Trubisky says has been an unexpected but welcome reset button for his career.

He’ll get a chance to showcase his progress this Saturday when he makes his return to Chicago. With the Bills keeping Allen on the sideline during preseason action for precautionary reasons, Trubisky will get the start against his former team.

“It’ll be weird going back there,” Trubisky said. “But I’m looking forward to it.”

This was not the role Trubisky was aiming for at the start of the offseason. Following a turbulent four-year stint with the Bears — which included both a trip to the Pro Bowl and his eventual demotion — the second overall pick in 2017 was expecting his share of suitors in free agency.

“Not as many options as you think,” Trubisky said. “It was a very interesting free agency process for me. At first I wanted to go to a spot where I would be able to compete for a starting position, but the right situation didn’t come up.

"And that opportunity really wasn’t there. So I looked at the next-best thing, where I could continue to develop and continue to progress and become a better player and a person, and fell into this organization. And I loved it ever since coming to Buffalo.”

Describing the transition to his new role as “humbling,” Trubisky has nonetheless embraced his role as a backup. He instantly hit it off with Allen, who is the face of the franchise after a breakout 2020 season.

“It’s been great,” Allen said. “We spend a lot of time together. ... He brings a lot of value to this team, a lot of knowledge, actually a lot of experience. It’s awesome to have somebody like that that you can just kind of bounce ideas off of. He’s a great player but he’s an even greater person and I wish everybody could know who he is.”

“He’s a real pleasure to be around,” Bills coach Sean McDermott said. “He doesn’t take this for granted. And he comes in every day with a great attitude of wanting to get better as a player, get better as a person and help our football team and so that says a lot about who he is.

"I love it when I see him smile out here because maybe he hasn’t been able to do that as much over the last couple of years. We all have a story, all these guys, myself included, we all have similar stories in our background and that’s what I think makes this place a good fit for Mitch.”

Trubisky’s new teammates are eager to see what he can do against his former team, even in preseason action.

“I know a lot of people may hate on him for Chicago or whatever, that don’t matter,” running back Matt Breida said. “He’s here now and he’s doing a great job. I’m excited for him to go out there and show that organization that they made a mistake. He’s a great quarterback and he belongs in the NFL.”

One player who will not suit up against Chicago is Bills receiver Stefon Diggs. Diggs remains out with a minor knee injury, but McDermott said Thursday that Diggs should return to the practice field in the next couple of days.