Tua's 1st start for Miami against Rams will test his hip 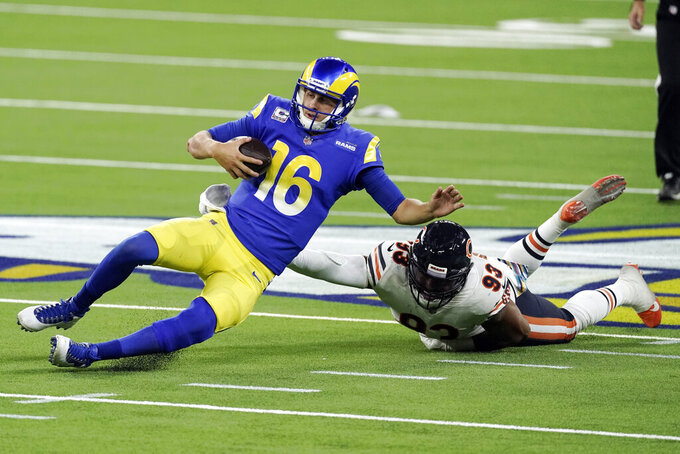 MIAMI (AP) — Tua Tagovailoa is about to get hit.

He doesn’t know exactly when it will happen, but he knows that sometime Sunday, he’ll likely be tackled for the first time since last Nov. 16, when he suffered a career-threatening hip injury on his final play for Alabama.

Now Tagovailoa is back to test that surgically repaired hip when he makes his first NFL start Sunday for the Miami Dolphins against the Los Angeles Rams.

“It has been a long time coming,” Tagovailoa said. “I don’t know what the hit is going to feel like. Every hit is different that you take in football, and I don’t think you can ever prepare for hits. It’s just something you have to go out knowing it’s going to happen.”

That's especially true against a stout defense like the Rams'. Aaron Donald and company are eager to give Tagovailoa an appropriate welcome to the NFL, and the Rams (5-2) also hope to build on their city's winning vibe in the wake of October championships claimed by the Lakers and Dodgers.

The Dolphins (3-3) will bid for their third consecutive victory with a chance to climb above .500 for the first time under second-year coach Brian Flores.

The cringe-inducing sequence has been replayed countless times in the past 50 weeks: Two Mississippi State defenders knocked off Tagovailoa’s helmet, bloodied his nose and — worst of all — dislocated his right hip.

He was carted off the field and taken by helicopter to the hospital, where his long comeback began.

Tagovailoa was medically cleared before training camp, but less than a month ago, Flores said he remained mindful of the injury and wouldn't rush Tagovailoa's return. Last week the coach decided to promote his rookie as a replacement for veteran Ryan Fitzpatrick, and said he has no concerns regarding how Tagovailoa will react to being hit.

“From a health standpoint, we feel good about where he is,” Flores said. “He’s going to get hit in the game; we know that.”

Against the Rams, that's likely. Donald ranks second in the league with eight sacks, and presents a significant challenge for an offensive line with two rookies.

GOING THE OTHER WAY

Tagovailoa does most things with his right hand, from eating to golfing, but he'll try to beat the Rams with his left hand.

He'll be the first left-handed quarterback to start a game since Kellen Moore for the Dallas Cowboys on Jan. 3, 2016.

“I think lefties are so rare in football because all of them are in baseball,” Tagovailoa said with a laugh.

As Rams coach Sean McVay noted, the football spirals in the opposite direction when thrown by a lefty, which requires an adjustment by receivers — and defensive backs.

“Hopefully we’ll get a chance to get our hands on some of his throws and go the other way,” McVay said.

While Miami’s offense has racked up plenty of points, the Rams’ defense under rookie coordinator Brandon Staley is getting increasingly tough, particularly after halftime.

Los Angeles is up to sixth in the NFL in yards per game allowed (313), and only Baltimore has yielded fewer points per game than the Rams (17.7). Donald and his teammates have been particularly strong after halftime, giving up only 33 total points.

The defense hasn’t allowed a touchdown in the second half since Week 3.

DOLPHINS GET DEFENSIVE TOO

The Dolphins are coming off their first shutout since 2014. For the first time in a decade, they’ve held two consecutive opponents to less than 150 yards passing, and their third-down conversion rate of 31% is the league's best.

“It has been said time and time again: It’s amazing what you can accomplish when nobody cares who gets the credit for it,” defensive coordinator Josh Boyer said.

HE CAN KICK IT

Veteran Kai Forbath will debut as the Rams’ new kicker in Miami. The Los Angeles native joined the team last week as the probable successor to rookie Samuel Sloman, who then sealed his fate against Chicago with his third missed field-goal attempt to go with three missed extra points this season.

Forbath was steadily accurate inside 45 yards for his first six NFL teams, and he had been working on improving his kickoff distance at a high school just a few miles from the Rams’ training complex.