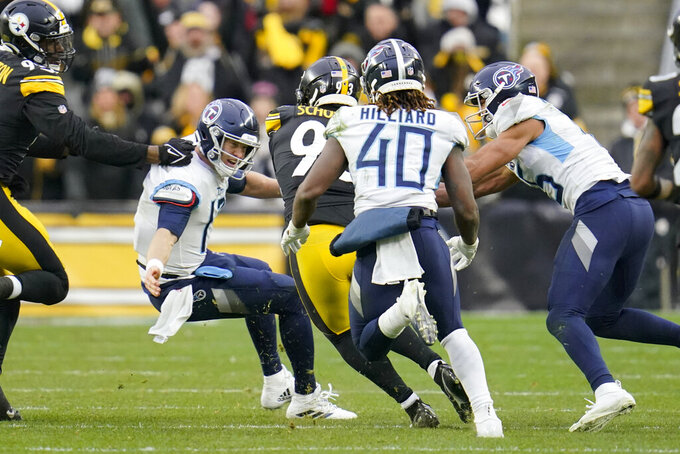 Tennessee Titans quarterback Ryan Tannehill (17) tries to tackle Pittsburgh Steelers inside linebacker Joe Schobert (93) after he made an interception on a Tannehill pass during the second half of an NFL football game, Sunday, Dec. 19, 2021, in Pittsburgh. The Steelers won 19-13. (AP Photo/Gene J. Puskar)

NASHVILLE, Tenn. (AP) — The Tennessee Titans have a simple problem that threatens to ruin their strong start to this season.

A team that turned it over all of 12 times for the 2020 season has had 13 in its past three losses. Only the Jets (26) have more turnovers than Tennessee, which is tied with Kansas City, Chicago and Jacksonville with 25 turnovers this season.

“I told the team the ball is not round, we don’t know which way it is going to bounce,” Titans coach Mike Vrabel said Tuesday. “We have to do everything we can to take care of it. Sometimes they make a good play, and sometimes it is our own doing.”

The Titans were 8-2 with a playoff berth and high playoff seed seemingly assured when the turnover issue worsened. They turned it over four times in their 19-13 loss to Pittsburgh on Sunday that dropped them to 9-5, four more in losing the AFC's top seed in a defeat to the Patriots on Nov. 28 and five in a loss to Houston on Nov. 21.

Vrabel went through the latest turnovers and explained each one. Tight end Anthony Firkser was loose with the ball after a third-down catch and had it knocked out. Rookie wide receiver Racey McMath was trying to make a catch and run with a defender on him and the ball came out on a center-quarterback exchange.

“We can keep going,” Vrabel said. “I don’t know if that is making a play or not. Just poor ball security.”

Protecting the football from prying hands is something the Titans have worked on all season. Assistant coaches don boxing gloves tying to punch the ball away from running backs, wide receivers and tight ends.

Yet, the Titans have lost 11 of 22 fumbles with seven players losing one fumble each.

Ryan Tannehill, intercepted all of seven times last season, has doubled that amount this season. And the quarterback kicked the ball after a bobbled snap in Pittsburgh. The quarterback, sacked 41 times this season, has fumbled a team-high nine times with four of those lost.

Tannehill said Tuesday the Titans just have to clean some things up, and taking care of the ball is at the top of the list.

“We’ve done some good things over the past month, but the turnovers killed us, and it’s something we’re talking about, we’re focused on. We have been," Tannehill said. "But we have to translate it from talking about it to practicing it and really carry it over into Sunday. Or Thursday in this case.”

The Titans have little time to dwell much more on the turnover issue. They host San Francisco (8-6) on Thursday night, a team that has forced 20 fumbles even if the 49ers have recovered only eight of those. Linebacker Fred Warner has recovered three fumbles, while Nick Bosa has forced four fumbles.

Tennessee has forced 14 fumbles but recovered only five. The Titans have been swarming to the ball on defense, focusing first on making the tackle with the defenders coming in to help asked to help strip out the ball.

Yet, the Titans failed to notch even a single takeaway in the past three losses.

Offensive coordinator Todd Downing says he wishes he had an answer to at least keep the Titans from turning the ball over.

“I would have implemented that answer weeks before we turn it over as many times we have,” Downing said. “It certainly is frustrating, and it certainly is something that we need to continue and strive to find ways to fix it. It’s what’s holding us back right now.”