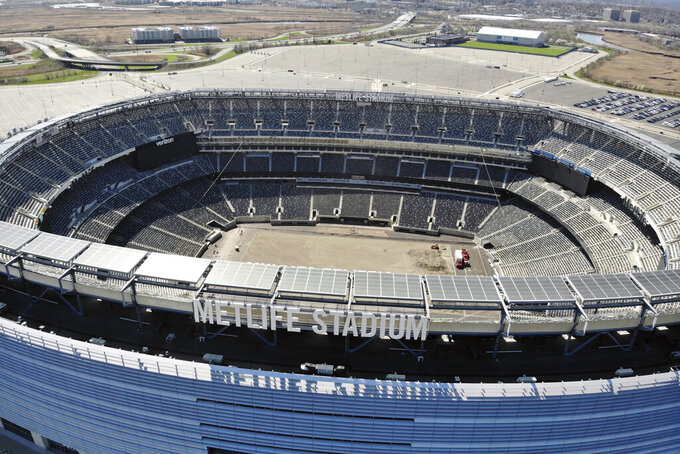 FILE - In this April 6, 2020, file photo, an empty MetLife Stadium in East Rutherford, N.J. , is viewed. Timing favored the NFL over other major pro sports leagues in trying to figure out how to keep the coronavirus pandemic from wrecking the 2020 season. America's most popular sport has another big advantage if the games are played: TV money. While NFL owners could lose billions collectively with limited capacities in stadiums or no fans at all, the league is well-positioned financially because of lucrative media contracts approaching $10 billion in a full 2020 season. (AP Photo/Ted Shaffrey, File)

DALLAS (AP) — Timing favored the NFL over other major pro sports leagues in trying to figure out how to keep the coronavirus pandemic from wrecking the 2020 season.

America's most popular sport has another big advantage if the games are played: TV money.

While NFL owners could lose billions collectively with limited capacities in stadiums or no fans at all, the league is well-positioned financially because of lucrative media contracts approaching $10 billion in a full 2020 season.

And so far, the NFL is on pace to play games this fall.

“The NFL takes its position as America’s sport, the nation’s sport, very seriously,” said Marc Ganis, co-founder of the Chicago-based consulting group Sportscorp and close observer of the pro sports business scene. “They will move heaven and earth, make whatever adjustments are necessary. As long as players and coaches are healthy, they will get the games on.”

Ganis says there are plenty of options within that premise: no fans, some fans, perhaps even full stadiums by season's end, or teams playing somewhere other than their regular venues because of restrictions related to the pandemic.

Regardless, the financial health of the NFL isn't among the questions, at least for now, while other leagues grapple with issues over fan-related dollars that more profoundly affect their ability to operate.

Fitch Ratings recently affirmed its “A-plus” credit mark for the NFL and its properties while noting that the league had approved raising the borrowing limit for each club to $500 million from $350 million. While Fitch analyst Chad Lewis said the debt limit had more to do with larger capital spending, such as stadiums and practice facilities, the company attributes part of its strong rating to the television deals. Fitch says the NFL estimates each team's media revenue at $250 million per season. The number gets bigger later in the contract, and each deal is set to expire in the next two years.

So it's safe to say more than half of the league's $15 billion in annual revenue comes from the TV deals shared equally among all 32 teams — unlike Major League Baseball, the NBA and NHL.

“If you just look at the number of eyeballs that the NFL gets on an average regular-season game,” Lewis said, “there’s just a very strong foundation there. That’s just really a testament to the strength of the league and how it looks for the league long term.”

Ganis estimates each team's average of stadium-related revenue — tickets, parking, concessions, sponsorships and merchandise among other things — at $130 million annually. The midway point in Forbes magazine's most recent analysis of stadium incomes for all 32 teams was about $150 million.

Those figures put leaguewide stadium revenue in the range of $4 billion to $5 billion annually, or about 30% of the overall bottom line. That's not far from former Packers executive Andrew Brandt's belief that roughly 60% of the NFL's money comes from media contracts, also known as national revenue.

Brandt says local revenues were a much larger portion of the formula when he joined the Packers 20 years ago. In Green Bay's most recent financial report covering the 2018 season, the NFL's only publicly traded franchise reported $204 million in local revenue compared to $275 million in national revenue.

Brandt, director of Villanova's Moorad Center of Sports Law, estimated ticket sales could make up about 25% of a team's total revenue depending on several factors, but he also wondered about the impact outside a stadium.

“There is nothing like game-day weekend in Green Bay,” Brandt said. “The way the hotels are sold out months in advance and they have these houses by Lambeau that are just rented for each weekend. The effect on local economies is huge.”

MLB's attempts to get the baseball season started are being held up in part by a disagreement over how to compensate players in the likelihood that owners will have no fan-related revenue. NFL owners and players recently reached a 10-year labor agreement. And while player compensation has been overshadowed by talk of access to team facilities and how to conduct training camps safely, Brandt believes it's a potential sticking point if the league decides to play without fans or limited capacities.

For one thing, next year's salary cap might shrink because of lower local revenues after expanding repeatedly for years. If attendance is restricted, owners and players might have to work on solutions for the cap.

“Difficult, not because of negativity between the two sides necessarily,” Brandt said. “It's difficult because of the subject. It's just how bad do the owners want to extract a pound of flesh.”

Former television executive Neal Pilson wonders if the virus-battered economy might lead some corporations to question spending on advertising in the fall. But Ganis believes the appetite for live televised sports will make the ratings behemoth known as the NFL as popular as ever, for companies and their consumers.

“Everything else, all other entertainment broadcasting, is in doubt except sports,” Ganis said. “And they need sports more than ever to advertise.”

The PGA Tour has restarted at a nearly deserted Colonial Country Club in Texas, and the NBA and NHL are moving ahead with plans to finish their seasons at neutral sites without fans. The NASCAR and IndyCar circuits are running in front of more than 100,000 empty seats, in some cases, though both will have a limited number of fans in attendance soon.

The NFL is the most watched of them all, so there figures to be a new wave of TV interest in September if the games are on.

“It was always awkward to televise a sports event and not see anybody there because we always felt that the viewer looks at the fact that there’s nobody in attendance and says, ‘Why am I watching? Nobody cares,’” said Pilson, who oversaw NFL coverage at CBS.

“We never were able to quantify that. But as a television executive you always want a full house.”

Yet even in empty houses, the payoff for the NFL is substantial.