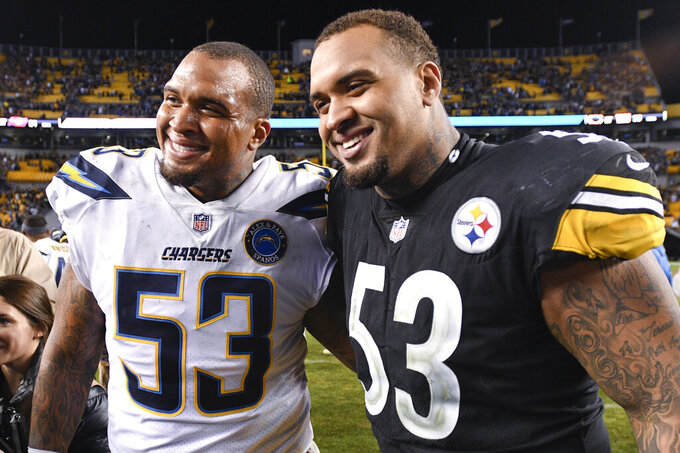 FILE - In this Dec. 2, 2018, file photo, Pittsburgh Steelers center Maurkice Pouncey, right, and his brother, Los Angeles Chargers center Mike Pouncey pose after playing against each other in an NFL football game in Pittsburgh. The twin brothers announced their retirement from professional football on Friday, Feb. 12, 2021. (AP Photo/Don Wright, File)

PITTSBURGH (AP) — Mike and Maurkice Pouncey came into the world together.

They're leaving the NFL in the same way.

The 31-year-old twin brothers announced their respective retirements on Friday after spending a decade among the best centers in the league. Maurkice Pouncey spent 11 years in Pittsburgh earning two All-Pro nods and nine Pro Bowl selections while serving as the security blanket for quarterback Ben Roethlisberger. Mike Pouncey reached the Pro Bowl four times while playing for Miami and the Los Angeles Chargers.

“To my big brother Mike Pouncey thank you for always pushing me to be the best,” Maurkice Pouncey posted on Instagram. “The sacrifices we made will forever go unnoticed but Together (13x ProBowls 2x first team all Pro’s 3x second team all Pro’s) who would’ve ever thought that as kids !”

Maurkice Pouncey, one minute younger than his “older” brother, had one year remaining on the three-year, $33 million contract extension he signed in 2019. He was limited to 13 games this season after being placed on the reserve/COVID-19 list, and gave a very public indication that he was ready to move on with his life at the end of Pittsburgh's stunning first-round playoff loss to Cleveland.

Pouncey and Roethlisberger — good friends whose lockers were practically side by side — sat on the Pittsburgh bench long after the game was over, with Roethlisberger saying afterward he really wanted to lead the Steelers to a Super Bowl for Pouncey.

“I don’t have the words...I love you and thank you,” Roethlisberger posted on his Facebook page shortly after the announcement.

Both Pounceys starred at Florida, with Maurkice's decision to come out early in 2010 opening the door for his brother to follow him to the league a year later. Maurkice helped the Steelers reach the Super Bowl in his rookie season, though an ankle injury rendered him a spectator as Pittsburgh fell to Green Bay.

The Steelers never made it back to the game's biggest stage under his watch. the closest they've come over the ensuing decade was a loss to New England in the 2016 AFC championship game.

Playing with a mix of athleticism and ferocity, Maurkice Pouncey developed a reputation as one of the league's most potent blockers. Still, it came at a cost. He tore the ACL and MCL in his right knee in the first quarter of the 2013 season opener against Tennessee and sat out all of 2015 after breaking his left leg in an exhibition game.

“For all the doctors & medical staff that has worked on me thank you for all the successful surgeries couldn’t have done it without you all!” Maurkice Pouncey wrote.

Pouncey regained his form immediately upon his return both times. He was an All-Pro in 2014 as the Steelers won the AFC North, and was second-team All-Pro in 2016. Both easygoing and blunt, Maurkice Pouncey served as the emotional touchstone of an offense that at times ranked among the best in the league — particularly during a stretch from 2014-17 when the Steelers won three division titles and made the playoffs each season.

His departure is the latest in a very active offseason for the typically reserved Steelers. A handful of coaches, including offensive coordinator Randy Fichtner and offensive line coach Shaun Sarrett, did not have their contracts renewed. Tight end Vance McDonald, also a close friend of Roethlisberger, retired two weeks ago.

Their absence will be felt by Roethlisberger, who has made open his desire to return even though he frequently said he'd play only as long as Pouncey was around. The Steelers and Roethlisberger are trying to find a way to lower the QB's $41 million salary-cap hit in 2021. Pouncey's retirement adds a layer of uncertainty whether Roethlisberger will ultimately return for an 18th season.

Mike Pouncey, like his brother a first-round draft pick, spent the first seven years of his career with the Dolphins. Miami reached the playoffs just once during his tenure, losing in the wild-card round in 2016 to Pittsburgh. Mike Pouncey's season, however, had long since been over thanks to a hip injury suffered a few weeks after the brothers faced off as rivals for the first time in their lives. He requested his release in the spring of 2018 and signed with the Chargers, making the Pro Bowl during his first season as they went 12-4 and reached the divisional round.

Injuries, however, took their toll. Mike Pouncey was limited to five games in 2019 and didn't play at all in 2020 after undergoing hip surgery in September.

“To all my teammates and coaches I’m going to miss seeing you guys everyday and i know damn well your (sic) going to miss pounce lol! ” Pouncey posted on his Instagram page. “Thank you for all the memories i will cherish them forever!”