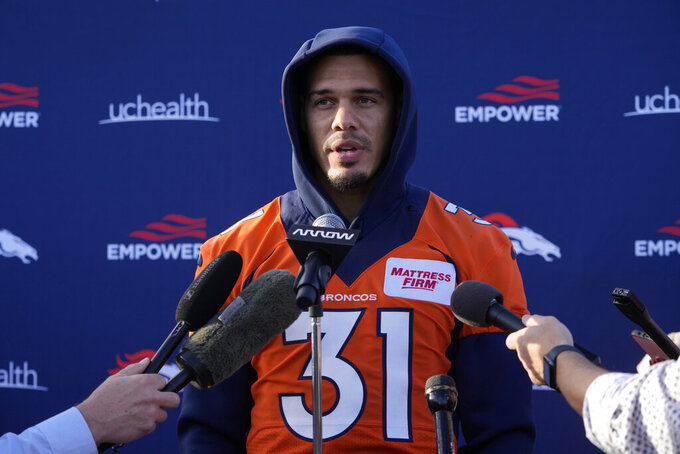 The first-year coach with the Denver Broncos is still learning on the job, which can be unforgiving.

The Broncos and Jaguars limped into London with 2-5 records and four-game losing streaks. The winner at Wembley Stadium on Sunday has a chance to reboot their season before it's too late.

The Broncos entered the season with much higher expectations after trading for Russell Wilson and handing the quarterback a $245 million contact extension.

Pederson is in his first year in Jacksonville as the Jags try to recover from Urban Meyer's tumultuous stint with the franchise.

“It's hard because you're asked to win right now, and that's the pressure we face every single day. Is it fair? Ah, I don’t know,” said Pederson, who was fired by Philadelphia three years after directing the Eagles to a Super Bowl title. “I just know that that's the task, and that's what we signed up for, and we don't shy away from that.”

Hackett got a show of support Thursday from Broncos general manager George Paton, who said he supports the coach 100 percent.

Hackett has been criticized for questionable decisions during games and for an anemic offense.

“It takes time to gel with anything,” Hackett said Thursday. "The more time you get, the better it all looks.”

Wilson practiced again Thursday — officially listed as limited — after being held out of last weekend’s 16-9 loss to the New York Jets because of a strained hamstring.

“He had a good day of practice today, looks good and we’re just going to keep on monitoring it day to day, make sure he’s OK,” Hackett said.

Brett Rypien filled in against the Jets and threw for 225 yards with one interception.

Wilson was optimistic about starting — and turning the season around.

“We can control the outside noise by how we play,” he said. “That’s for everybody, that’s starting with me, starting with everybody across the team, it’s our coaches ... we’re all in it together.”

Denver is holding opponents to 16.4 points per game but has yet to find a way to kickstart its offense. Nowhere is the Broncos’ woeful offense more pronounced than after halftime. They’ve managed a single field goal in 21 third-quarter drives through seven games.

The Broncos hope a change in scenery and a switch in their uniforms will help them find a better vibe in London.

Wilson and Jacksonville quarterback Trevor Lawrence both have a London victory on their resumes.

“It was a great time — to go 3,000-something miles for our first win last year. It was awesome,” Lawrence said. “The stadium, the fans, the city, everything was really cool.”

Lawrence has thrown for nine touchdowns and four interceptions this season — on pace for big improvements over his rookie season — and he has rushed for three scores in the past two games.

In 2018, Wilson led the Seattle Seahawks to a 27-3 victory over the Raiders at Wembley.

The Jaguars expect second-year running back Travis Etienne to be their main ball carrier moving forward. The team traded James Robinson to the Jets on Monday for a conditional sixth-round draft pick.

Etienne shared snaps with Robinson during the first seven games. Etienne is faster, shiftier and better out of the backfield than Robinson. He was the 25th overall selection in the 2021 NFL draft and missed all of last season following foot surgery.

“I feel like it’s on me to grow up really fast,” Etienne said. “As a competitor, you want to be that guy and now it’s here. Now I have my own plate to look at. I don’t have to take off no one else’s plate.”

The Broncos’ new running back rotation with Javonte Williams and Mike Boone on IR consists of Melvin Gordon, recently signed Latavius Murray and Marlon Mack, who was signed from the 49ers’ practice squad just before the Broncos flew to London.

Mack is a sixth-year veteran who has appeared in 49 regular-season games with the Colts and 49ers.

While Murray sat out his first game with the Broncos after playing for New Orleans in London on Oct. 2, Mack has a good chance to play against the Jaguars.

“There’s a lot of carryover from where he was with protections and the run game,” Hackett said.

Paton, the Broncos GM, said there's “nothing imminent” ahead of the NFL's Tuesday trade deadline. OLB Bradley Chubb's name has been frequently mentioned.

Asked if the Broncos are a seller, he responded: “We’re going to do what’s best for the team.”