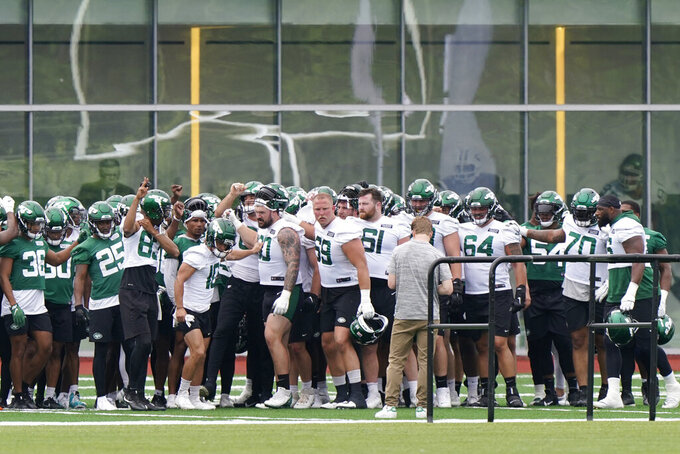 Members of the New York Jets gather together after warming up before the start NFL football practice, Wednesday, June 2, 2021, in Florham Park, N.J. (AP Photo/Kathy Willens)

NEW YORK (AP) — Jeff Ulbrich was a tough and gritty linebacker during his playing days, always willing to do the necessary dirty work.

That's the same approach and identity he's bringing to the New York Jets as their defensive coordinator.

“He’s just, you know, an old-school linebacker,” inside linebacker Jarrad Davis said Friday. “He’s still got it in him. Every single day, he brings that energy, brings that fire. And it’s something that helps push us as players.”

Ulbrich has a clear vision for how he's going to run his defense in New York. It's a seemingly simple philosophy, but one that will shape the type of team the Jets expect to field.

In other words, Ulbrich will focus on the players' strengths, teach them and let them play.

“And that’s going to be the secret sauce. Simplicity, though, and players first.”

That's important to Ulbrich because he was once exactly where his players are now.

The 44-year-old coach played 10 years in the NFL, all with San Francisco, after being a third-round pick out of Hawaii in 2000. Never a star, Ulbrich was always a vital piece of the 49ers' defense and special teams units. He played in 120 NFL games and started 75, finishing with over 400 tackles, 5 1/2 sacks, five forced fumbles, an interception and a safety.

And lots of respect around the league.

“He is pure energy,” Jets coach Robert Saleh said. “He’s real. He’s a guy’s guy and it’s awesome that we have him here.”

A concussion at 32 cut short Ulbrich's playing career in 2009, but his love for the game still burned. So, he immediately pursued coaching and worked his way up the ranks while passing along his knowledge to young players.

“I’ve been in their shoes and sat in their chair and know what it feels like, so it can give me perspective in that way,” he said. “Hopefully it gives me a little street cred, the fact that I’ve done it and played for a while, that, you know, there’s a level of trust there, maybe, that a former player can generate.

"Beyond that, other than the headaches that I have, not much of an advantage, though.”

All the experience he has garnered from the sideline over the last 11 years certainly helps.

Pete Carroll hired him in 2010 as an assistant special teams coach in Seattle, where he first crossed paths with Saleh, who was a defensive quality control coach.

“Ever since then, we’ve kept in constant contact,” Ulbrich said, “always shooting ideas back and forth to each other.”

After a two-year stint with the Seahawks, Ulbrich coached linebackers and special teams at UCLA for three years under Jim Mora. He returned to the NFL with Atlanta in 2015 when Dan Quinn made Ulbrich his linebackers coach before adding assistant head coach to his titles last season.

When the Falcons fired Quinn in the middle of the season, interim coach Raheem Morris had Ulbrich replace him as the defensive coordinator. And when the team cleaned house after Atlanta finished 4-12, Ulbrich wasn't out of a job for long.

Saleh hired him in January to run the defense, appreciating his vision on the field — and how he handles himself off it.

“If you ever get a chance to sit down with Jeff in a non-football setting, he’s probably one of the most real dudes that you can actually be around,” Saleh said. “His knowledge of football, his mindset, the things that I believe in philosophically with the mindset of how to play this game and the way you maximize players with regards to scheme and the details that come with it.”

Ulbrich will infuse parts of the Falcons system he worked in with aspects of the 49ers' system, which Saleh ran the last four years as their defensive coordinator.

“I’ll add some wrinkles," Ulbrich said, "but the foundation of this is what he grew it into in San Francisco.”

And their personalities should mesh in a big way. Both Saleh and Ulbrich are emotional guys on the field during games, but level-headed leaders otherwise.

"It’s an understanding of all the work that just went into each other — players, coaches, everybody. So when great things happen on the football field, the excitement that you see is for the player more than it is for anything else. And, that’s what Jeff represents.”