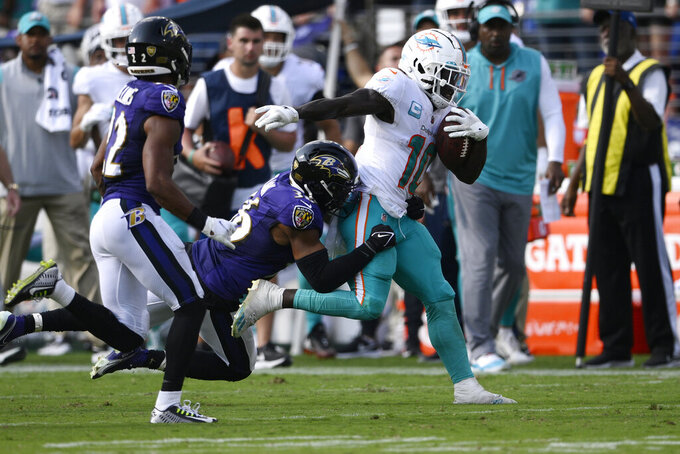 MIAMI GARDENS, Fla. (AP) — Two games into the season, the Super Bowl appears to be an attainable goal for the Buffalo Bills.

The Bills returned mostly the same offense that fell just short against Kansas City in a divisional-round thriller last year and retooled their defensive front with additions including Von Miller. They’ve looked like one of the best teams in the NFL through the first two weeks of the season thanks to convincing wins over the defending champion Rams and the Titans, last year’s AFC No. 1 seed.

Up next is a Miami Dolphins team that looks to be a contender in the AFC behind its confident first-year coach and electric offensive weapons.

“The Buffalo Bills have won the division and done an unbelievable job in all three phases," Dolphins coach Mike McDaniel said, “so what better for the Miami Dolphins, that’s a young team that is really invested and they’re very eager to play football, what better opportunity than playing the best and seeing where you’re at?”

The Bills (2-0) and Dolphins (2-0) enter Sunday’s game in South Florida with two of the top performing offenses so far this season, but Buffalo has dominated the series in recent years.

The Bills have won the last seven meetings, and beat the Dolphins 35-0 in Week 2 last year.

This isn’t quite the same Miami team that Buffalo has faced in years past, however. Tyreek Hill and Jaylen Waddle have been a tough receiving duo to stop, mostly because opposing defenders haven’t been able to catch them.

Hill leads the NFL in receiving yards with 284. He has 19 receptions and two touchdowns. Waddle has 16 receptions, 240 yards and three touchdowns.

“We’ve gone up against both of them before, but now they’re on the same field,” Bills coach Sean McDermott said. “I always thought they were a talented football team over the last couple of years, going against Miami that is, and now adding Tyreek Hill to that mix, they’ve got a tremendous amount of playmakers on that team.”

As good as the Bills have been behind Josh Allen, Stefon Diggs and their bevy of weapons, Buffalo hasn’t escaped the first two weeks of the season without adversity.

The Bills have a rash of injuries in their secondary, including neck injuries to safety Micah Hyde and cornerback Dane Jackson. Rookie cornerbacks Kaiir Elam and Christian Benford could be given the task of lining up against Waddle and Hill.

“The production that they’ve given us, the games haven’t been too big for them,” Bills defensive coordinator Leslie Frazier said of Elam and Benford. “So if it comes to that, where they would have to both start, we’d be confident with both of them out there for sure. ”

He passed for 317 yards and four touchdowns against Tennessee, which was his fifth game with at least four touchdowns and no interceptions since 2020. He's fourth in the NFL in total passing yards with 614.

“He’s a beast. I don’t know what else to say about him,” Miami's Tua Tagovailoa said. “I mean the guy runs the ball when he needs to, extends plays with his legs. He can get the ball down the field and he gets the ball to his playmakers.”

The Bills are 3-0 against Tagovailoa, including what turned out to be his brief start in last September's 35-0 win. Tagovailoa completed one of four attempts for 13 yards over two series before being forced out by a rib injury sustained when he was hit by Buffalo’s A.J. Epenesa.

Tagovailoa’s best outing against Buffalo came in a 52-26 loss in the 2020 season finale against many of the Bills' backups. He went 35 of 58 for 361 yards and a touchdown with three interceptions.

Defensive tackle Jordan Phillips never panned out in Miami, where he was a second-round pick in 2015. Released by Miami in 2018, he was immediately claimed by the Bills, where he blossomed into a regular before signing a three-year contract with Arizona as a free agent in 2020.

Phillips is back in Buffalo after signing a one-year deal this offseason, and he's already playing a disruptive role as part of a retooled defensive front.

“We’re not surprised by his production and the impact he’s had,” Frazier said.

The Bills are finally getting a chance to play on a Sunday, and in the daytime no less, after opening the season with two prime-time outings.

Buffalo played in the NFL’s season opener, defeating the Los Angeles Rams 31-10 on Sept. 8, and then had to wait 11 days before beating the Titans 41-7 on Monday night. The Bills are currently scheduled to play seven more games at 1 p.m. on Sundays, with at least three more prime-time outings, plus a Thanksgiving Day date at Detroit.

McDermott adjusted to the short week by having a walk-through session on Wednesday ahead of Thursday's first practice.