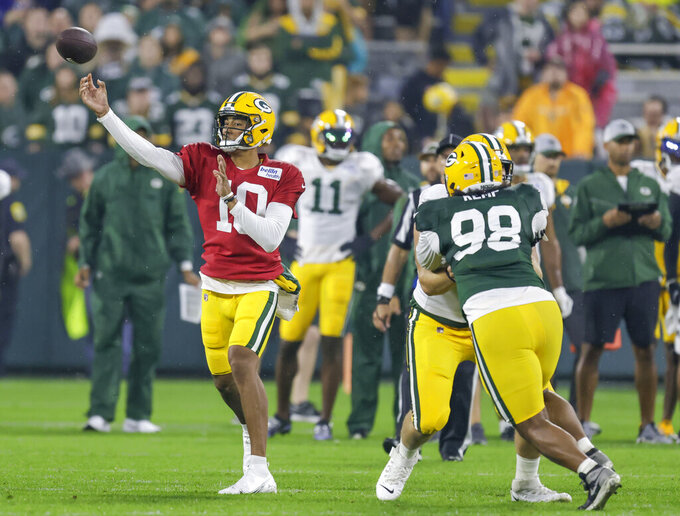 Williams went on to become one of the better cornerbacks in the NFL over the next decade. Only time will tell whether Kabion Ento’s career follows a similar trajectory, but the unheralded cornerback was one of the standout performers of Saturday’s Family Night at rainy Lambeau Field.

In two seasons as a receiver at Colorado, Ento started only two games and caught 20 passes. As a way to keep his NFL dreams alive, he moved to cornerback before the 2019 draft.

Ento went undrafted but made enough splash plays during his rookie training camp to stick with the team on the practice squad. However, he broke a foot in training camp last summer and spent the season on injured reserve.

Ento didn’t have a Williams-esque moment Saturday but he did use his imposing combination of height (6-foot-1 3/8) and leaping ability (41 1/2-inch vertical) to break up two passes intended for Malik Taylor.

“I thought Ento did some nice things,” coach Matt LaFleur said. “He had a couple pass breakups. He’s a guy that’s got to go out there and compete and do it on a consistent basis. We’ll have three more opportunities in live game action to watch him out there, and we’ll see where he ends up.”

Overall it was a good night for the defense, which kept the offense out of the end zone. The first six third-down plays were stopped, including a sack by defensive tackle Dean Lowry. Cornerback Jaire Alexander broke up passes from Aaron Rodgers to Allen Lazard and Davante Adams.

This also was a memorable night for rookie offensive lineman Cole Van Lanen, a sixth-round pick from Wisconsin who grew up near Green Bay in Suamico.

“It was awesome to be able to go into Lambeau with fans and you’re the person on the field, not watching it,” Van Lanen said. “It’s definitely an unbelievable feeling, something kind of indescribable. I’m just excited to get in there for a real game, feel the real atmosphere. The atmosphere was awesome tonight, but I’m really excited for a game.”

Notes: Attendance was 34,835. Lightning before the start of practice sent fans to the concourse and the post-practice fireworks were canceled. In between, the team practiced for about 90 minutes. “When we first went out there we were told, ‘You’re going to have an hour, max.’ Well, we could still be out there probably right now,” LaFleur said. … Along with CB Kevin King, OLB Za’Darius Smith and DT Kingsley Keke, who are on the non-football injury list, and LT David Bakhtiari, who is on the physically unable to perform list, DT Kenny Clark and WRs Juwann Winfree and Equanimeous St. Brown were among those not practicing. … No players were injured during the practice, LaFleur said. … A starters-vs.-starters two-minute drill died at the defense’s 10, with LB De’Vondre Campbell getting into the lane between Rodgers and Adams. Two-minute periods with the Nos. 2 and 3 units were scrapped by LaFleur in response to the weather. … Adams dropped a pass and S Darnell Savage made a juggling interception. … The wet weather took its toll. Rookie C Jacob Capra was benched after two botched snaps to Love, and Love lost the ball on a scramble. … A Big Ten crew officiated the practice. … The Packers will open the preseason next Saturday night at home against the Houston Texans.