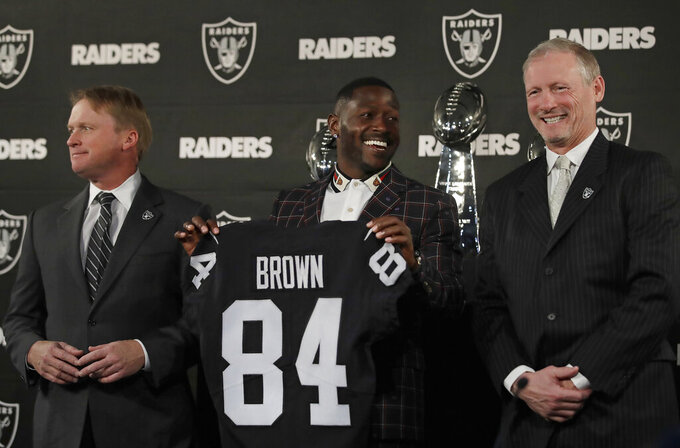 The Raiders coach and general manager were set for a night on the town with their wives when those plans got altered with the news that the NFL's most prolific receiver, Antonio Brown, was available from Pittsburgh.

Just 24 hours later, Mayock had completed his first major move since leaving his old role as television draft analyst to join an NFL front office and all those plans the Raiders had made were overturned.

"The wild card was all of a sudden understanding that this guy might be available," Mayock said this week. "That was the wild card. That was not in our free agent planning. When all of a sudden we realized we might have an opportunity to compete for his services, it changed everything."

The Raiders seemed poised for a rebuilding year after dealing away foundation pieces Khalil Mack and Amari Cooper last year in trades that netted three additional first-round picks the next two years. But the trade for Brown set them up to begin a spending spree that the Raiders hope can make them a contender in their final season in Oakland before the move to the desert.

The Raiders also gave big-ticket deals to free agent tackle Trent Brown, safety Lamarcus Joyner and receiver Tyrell Williams and have committed more than $200 million in contracts just six months after trading Mack to Chicago because they didn't want to give him a mega-contract as the highest-paid defensive player in football.

"We've gotten better, we have some resources in the draft that can continue that process and as I've said all along, I don't think you can rush this," Gruden said. "You have to do what you deem is right. Players don't become available all the time. You can't make all the necessary improvements. It takes a little bit of time. But we're confident that we're heading in the right direction."

At least the Raiders now appear to be moving forward after taking a significant step back in Gruden's first season. The team never recovered from the deal reached a week before the opener that sent Mack to the Bears for a package that included two first-round picks after he held out in search of a lucrative long-term contract the Raiders weren't willing to offer.

After starting last season 1-5, Gruden then sent Cooper to Dallas for another first-round pick and the rebuild was on. Oakland finished 4-12 just two seasons after breaking through with 12 wins and the team's only playoff berth since 2002.

Plenty of holes remain on the roster even after this week's big spending spree with the most glaring being at pass rusher where Mack has yet to be replaced. Oakland has only one edge rusher under contract for 2019 in Arden Key, who had just one sack as a rookie.

The Raiders finished with a league-low 13 sacks last season — 17 fewer than the next-worst team. Oakland still would like to find an edge rusher in free agency and also figures to target that position the draft when the team has picks No. 4, 24, 27 and 35 in the first two rounds.

Mayock and Gruden also are looking for more help in the secondary, a playmaking linebacker, and possible help on offense at tight end, running back and guard.

Filling all those holes in the draft and the end of free agency seems far-fetched, but getting a good start on the task will give the fans in Oakland a more desirable product to watch this season and create excitement in Las Vegas for the team's planned arrival in 2020.

"There is a lot of history here, so I definitely wanted to come and be a part of the history and I also wanted to be a part of new beginnings," said Joyner, who was attracted by the move. "Hopefully we do a lot of great things this year and make Nevada even more excited to have us."

The Raiders hope the move to Las Vegas, where they will play in a fancy new stadium rather than the rundown Coliseum and have a more modern facility, will make the team a wanted destination for free agents in the future.

A recent poll of agents by Sports Illustrated's "The MMQB" listed Oakland as the second-least desirable team to join in free agency, ahead of only the Buffalo Bills, but that figures to change next season with the lack of a state tax in Nevada only making the location more desirable for players.

But those factors won't be as important in the future as Gruden and Mayock hitting on the draft picks to replenish the roster and make the team a contender once again.

"I think the reason for me wanting to come here was to advance to Nevada with coach Gruden," Joyner said. "I have come into contact with him throughout my career and he has always expressed to me how highly he thought of me as a player. When it comes to the state income taxes and stuff, that's the kind of conversations you have with your wife and your kids, but that didn't have anything to play into me wanting to join this great organization."