Very different No. 8 Baylor sees chance to repeat as champs 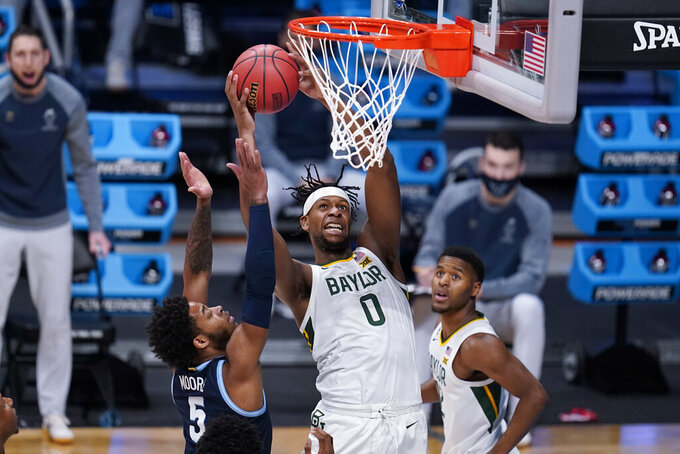 FILE - Baylor forward Flo Thamba (0) drives on Baylor guard Jordan Turner (5) in the first half of a Sweet 16 game in the NCAA men's college basketball tournament at Hinkle Fieldhouse in Indianapolis, in this Saturday, March 27, 2021, file photo. Baylor coach Scott Drew has talked to his team about the unique opportunity as the defending national champion, even with a roster that has changed drastically since the Bears cut down the nets last April. Big man Flo Thama is the only starter back for eighth-ranked Baylor, though he is interchangeable with fellow returning forward Jonathan Tchamwa Tchatchoua. (AP Photo/Mike Conroy, File)

WACO, Texas (AP) — Baylor coach Scott Drew has talked to his team about the unique opportunity available to the defending national champions, even with a roster that has changed drastically since the Bears cut down the nets last April.

“From a coaching standpoint, we’re really excited because normally when you win a championship and have a lot of people go pro and leave, sometimes it’s truly rebuilding years where you know you don’t have a chance to compete for a league title or a Final Four,” Drew said. “But at the same time, we have enough talent and experience where we have a chance, and that’s exciting as a coaching staff.”

Big man Flo Thama is the only starter back for eighth-ranked Baylor, though he is interchangeable with fellow returning forward Jonathan Tchamwa Tchatchoua. Energetic forward/guard Matthew Mayer will have a bigger role, as will guards Adam Flagler and LJ Cryer. Graduate transfer guard James Akinjo was Arizona's leading scorer last season, and freshman guard Kendall Brown, a five-star recruit, could make an immediate impact.

“It’s going pretty smooth. All the guys really like each other. At the end of the day, we’re brothers and that just makes it 10 times easier,” Cryer said. “It’s really translating to the court because we have a lot of unselfish guys.”

The Bears will be trying to defend their first national and Big 12 titles without talented and selfless guards All-American Jared Butler, Davion Mitchell and MaCio Teague. Do-everything forward Mark Vital is now a tight end on the practice squad for the Kansas City Chiefs after five years in Baylor’s basketball program.

Those departures are the primary reason Baylor is behind No. 3 Kansas and No. 5 Texas in the AP Top 25, both also picked ahead of the Bears in the preseason Big 12 poll.

“The good thing about this team is you’ve got enough returning players where you’ve got an identity and a culture, and they know how and what it takes to be successful,” Drew said. “At the same time, you have enough new players that you have excitement and energy because any time something’s new normally that excites everybody. And there’s new roles for the returning players.”

Cryer, who as a true freshman played 10 minutes a game last season, said the biggest thing he learned from Butler, Mitchell and Teague was poise.

Tchamwa Tchatchoua insists that the Bears have already “kind of forgotten” about winning the title.

“We’re on to next season and we always have that 1-0 mindset,” the player known as “Everyday Jon” said. “The national championship shirts and logo, that’s just for the family and friends. But right now we haven’t won a single game this season. So we still have everything to prove.

“We lost a lot of seniority from last year,” he said. “We’re not going with the mindset that somebody is going to take our spot.”

Butler, Teague and Mitchell were Baylor's top three scorers last season, followed by Flagler (averaged 9.1 points in 22.8 minutes per game) and Mayer (8.1 points and 3.7 rebounds in 15.7 minutes per game). Mayer was on the preseason All-Big 12 team selected by coaches.

Akinjo began his college career at Georgetown, then left Arizona after one season following a coaching change. The Bears also added guard Dale Bonner after he led Division II Fairmont State in scoring, assists and steals in each of his past two seasons. Brown was tabbed by Big 12 coaches as the league's preseason freshman of the year. He was part of the highest-ranked recruiting class in program history with 6-5 guard Langston Love and 6-9 forward Jeremy Sochan.

The Bears start with four home games in nine days, including the opener Nov. 12 against Incarnate Word and a visit by Stanford, before going to the Bahamas for the Battle 4 Atlantis tournament Thanksgiving week. Fourth-ranked Villanova, national champ in 2016 and 2018, visits Waco on Dec. 12 in a rematch of a Sweet 16 game that Baylor won 62-51 last March. The Bears play at No. 13 Oregon on Dec. 18, and open Big 12 play New Year's Day at Iowa State.