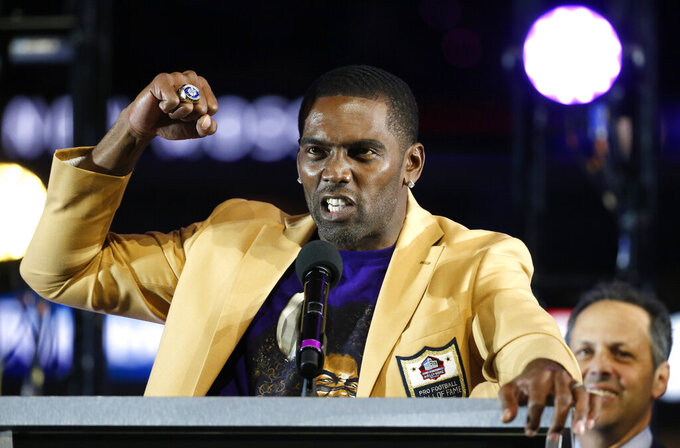 FILE - In this Nov. 25, 2018, file photo, former Minnesota Vikings wide receiver Randy Moss speaks after receiving his Hall of Fame ring during halftime of an NFL football game between the Vikings and the Green Bay Packersin Minneapolis. The Vikings have drafted six Hall of Famers in the first round. None made more of a splash than Randy Moss in 1998.(AP Photo/Bruce Kluckhohn, File)

None made a bigger splash than the 21st pick out of Marshall. Coach Dennis Green dismissed his off-the-field trouble and stopped the slide down the draft board. As a rookie, Moss led the NFL with 17 touchdown receptions, helping the Vikings set the all-time scoring record and sending division rivals scrambling to bolster secondaries with bigger players.

Blair, though, made six straight Pro Bowls from 1977-82 during a 12-year career with the Vikings. He contributed to seven playoff teams and was an ace on special teams, establishing the franchise record with 20 career blocked kicks.

WORST FIRST-ROUND DRAFT PICK: WR Troy Williamson and DE Erasmus James (2005). This one's a tie, fittingly, because Williamson (seventh) and James (18th) were taken on the same day. Moss had worn out his welcome, so he was traded to Oakland for the pick used on Williamson. The speedster from South Carolina had three touchdown catches in three years with the team. Dropped passes were a big problem. Over the eight spots after Williamson, LBs DeMarcus Ware, Thomas Davis and Derrick Johnson came off the board. They combined for 16 selections to the Pro Bowl, each enjoying a career of 12-plus years. Instead, the Vikings took James out of Wisconsin. He had three major knee surgeries and spent only three years with the team. The salt in the wound: Green Bay got Aaron Rodgers at No. 24 in that draft.

Can't ignore the sad case of DE Dimitrius Underwood (1999), taken 29th overall after the Vikings snagged QB Daunte Culpepper that year at No. 11. Underwood, who struggled with mental illness, reported to training camp in military fatigues and left the team without permission on the first day of practice. He was released a few weeks later.

WORST SECOND-ROUND DRAFT PICK: LB Raonall Smith (2002). The Vikings struggled on defense in the early 2000s, a direct result of fruitless drafting. Smith was the 38th overall pick out of Washington State, playing sparingly over only three seasons.

BEST DRAFT TRADE: The Vikings made DE Jared Allen the highest-paid defensive player in the league after acquiring him from Kansas City three days before the 2008 draft. The price was just as steep, a first-round pick (17th overall) and two third-round selections. Two of them, left tackle Brandon Albert and running back Jamaal Charles, became Chiefs standouts.

Still, Allen had 85 1/2 sacks in six seasons. He was an All-Pro three times, never missing a game and helping the Vikings make three trips to the playoffs — including the 2009 NFC championship game.

WORST DRAFT TRADE: One of the worst in sports history: The Vikings fetched RB Herschel Walker and four picks — all third round or later — from Dallas in 1989 for a five-player, eight-pick bounty. That left the Vikings without a first or second-rounder for three straight years, 1990-92. The Cowboys? They won three Super Bowls in four seasons, from 1992-95.

DID YOU KNOW THEY ONCE DRAFTED?: DE Bobby Bell (1963). The Vikings stayed local in the second round and picked the Minnesota star 16th overall. But they declined to guarantee his contract. Bell chose the AFL's Chiefs instead and became a Hall of Famer. He was a six-time All-Pro in 12 years in KC, which beat the Vikings in the Super Bowl after the 1969 season.