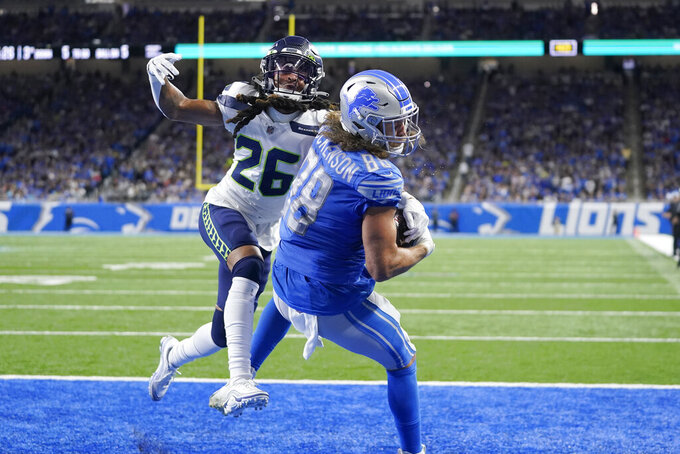 The Vikings simply downgraded two draft picks with no net loss to make the swap with the Lions. They sent a 2023 second-rounder and a 2024 third-rounder for the Lions, for a 2023 fourth-rounder and a conditional 2024 fourth-rounder. The deal, which was pending completion of Hockenson passing a physical exam, came two days after a serious ankle injury for primary Vikings tight end Irv Smith Jr.

The Lions (1-6) previously picked up Hockenson’s fifth-year contract option for 2023, so the Vikings (6-1) are getting more than just a short-term rental from a last-place team going through another rebuilding process.

Hockenson has been one of the league's most productive pass-catching tight ends since the Lions picked him eighth overall in the first round of the 2019 draft out of Iowa. He made the Pro Bowl in 2020 and has 2,068 receiving yards and 15 touchdowns on 186 receptions in 47 games, having missed the last four games of his rookie year with torn ankle ligaments and a broken leg and missed the final five games of last season for a thumb injury that needed surgery.

The Vikings now have another proven field-stretching option for quarterback Kirk Cousins to pass to and help keep some of the opposing defensive attention off wide receiver Justin Jefferson and running back Dalvin Cook.

With 395 receiving yards, Hockenson has the highest seven-game total of his career. He has a league-leading average of 15.2 yards per catch among qualifying tight ends.

The Vikings are last in the NFL with an average of 7.3 yards per reception by a tight end, according to Sportradar data. Vikings tight ends also have four dropped passes, tied for the fourth-highest team total in the league.

The Vikings placed Smith on injured reserve on Tuesday, meaning he must sit out for a minimum of four games. He was hurt when he was blocking in front of running back Alexander Mattison during a touchdown pass from Cousins to K.J. Osborn in the fourth quarter on Sunday against Arizona. Mattison lost his balance and fell into the back of Smith's leg.

Hockenson will carry a salary cap hit in 2023 of more than $9.3 million. Smith will become a free agent after this season.

Coach Kevin O'Connell called Mundt's performance “ultra-consistent" on Monday, but he also made clear the Vikings were seeking more impact in the passing game from that position. Smith, who missed the entire 2021 season with a knee injury, was being counted on to provide that.

“That’s our job as a staff to continue to give Kirk all of the weapons and possibilities to make five eligible come to life,” O'Connell said on Monday, before the trade was made. “I expect a lot out of that room when their number is called.”